I dunno. But games are definitely art.

I think honestly most people don’t know what “art” is anyway and a good chunk of them get angry and threatened when it isn’t a clear cut as they’d hoped.

I believe that just about anything made by the human mind is art, but if one insists on making a distinction with “fine art” or what have you, then it depends on the game. The people writing off games as “not (fine) art” just aren’t playing the right games.

I’m not a gamer but there is no doubt in my mind the video games will soon be recognised as art.

I think Cyberpunk 2077 was a watershed and its influence is bouncing back into real-world culture. I predict that over the next few years we’ll see it’s influence in fashion design, interior design and vehicle design etc.

I think it’s a game-changer (scooz the pun).

I mean, some people do.

The modern art movement was largely an exploration of “what is art?” and the general conclusion was “everything can be art”.

But there is still a sort of high brow hierarchy in the art world. Where things like painting is at the top, and then sculpture, ceramics, etc. Of course others poo-poo that idea.

Comic books used to be seen as throw away media, and now there are original art works going for a million dollars + (some of this is due to Heritage Auctions creating a new bubble to exploit, but there is still some genuine interest there.)

You may well be right but I’ve lost count of how many games I’ve heard people say that about over the years.

It seems like every year or so some game comes along and someone says this one is the one that’ll change the view of games forever, this one will make everyone say games are art!

Haven’t watched that video yet but there’s so many games that are truly works of art. Even mobile games are definitely art.

Makes me want to play through Monument Valley again… 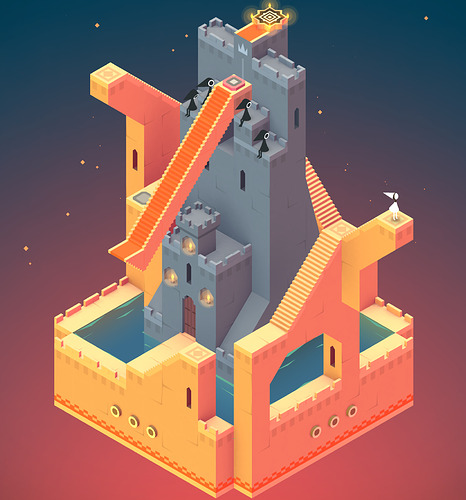 and some people still say “Video games? You mean, like my kid plays?”

Yeah, but those same people will go to MOMA and go, “I don’t get it. My kid could paint that! I got a drop cloth in the garage that looks like that! That’s just a giant stuffed telephone!”

So, really, their attitude on what is art I don’t really consider a good source.

It won’t be a particular game that changes everything. It can only occur as a change in the viewership. It took decades for people to take film seriously. Hell, it took time for novels to be taken seriously. Film and novels have not changed; society did.

So, really, their attitude on what is art I don’t really consider a good source.

Oh, sure. My comment was more about the likelihood of there ever being a specific game that everyone (or even a general consensus of people) can point at to say, this game is the one where video games became “Art”.

You may well be right but I’ve lost count of how many games I’ve heard people say that about over the years.

You may well be right too.

But I guess I can say with confidence that Days Gone, Death Stranding and Cyberpunk 2077 feel very much like art to me.

This is the point at which I have to admit that the most modern game I’ve bought was probably – Skyrim?

Which still astounds me with its graphics.

The Last of Us was certainly a watershed moment. I can’t imagine someone playing through it to the end without seeing it as art. The problem is the people who don’t play those games or play any games at all.

Yeah, that one too.

Is there a game version of the Oscars or Emmys or whatever? 'Cos there should be.

I mean people still think some kinds of paintings, or anything mass-produced, or anything pornographic etc. isn’t art so that’s always going to be the way that is. For games there’s also the introduction of new technology and also the introduction of a different kind of engagement and even socialization. Those things can make it perhaps more like the world of recreational sports or something while the workspace is heavily associated with software engineering.

It’s just hard to convince people that whatever they learned about art in the past came from a time when none of this existed and now it doesn’t address the present very well.

There’s an easy answer here, which I say as someone who has been both a fine artist and worked in video games, and it’s : “for the most part, they haven’t been.” Historically the only consideration for games was “is it fun?”, which puts it outside the category of “art” no matter how good the graphics are. Other considerations in making the game (or its function), any self-awareness, etc. that might put a game in the “art” category came relatively recently, especially in regards to larger games (which still tend to fall short).

The thing about Ebert was that he was at the time (mostly) right, but for completely the wrong reasons. His argument was that in games, you can “do anything,” and thus there were no creative choices being made by the makers and it was therefore not art. This is both wrong and absurd - on par with claiming that in movies, you can “see everything,” that the creators weren’t selecting specific images for you to look at and therefore cinema is not art.

An extra absurdity is that I know Ebert was shown some works by actual fine artists working in the medium of video games, work that was made only to be displayed in art galleries and museums. (One of those artists, a friend of mine, is now the head of an art department.) Which is to say that, in terms of fine art theory, the work qualified as art under multiple definitions of “art.” Ebert’s position didn’t shift - he declared, “this [art] isn’t art” without any apparent awareness of the irony involved in the statement.

The modern art movement was largely an exploration of “what is art?” and the general conclusion was “everything can be art”.

Well, a couple things. There’s multiple meanings of “art” in English. When talking about all creative expressions in general, i.e. “the arts,” is different from “(fine) art,” a specific sub-category that gets displayed in museums. The distinction is not a value judgement, but an ontological difference. Art generally has been an exploration of “what is art?” since the camera was invented. It’s not that “everything can be art” so much as “most things, regardless of form or even original function, can be contextualized as art.” There’s still multiple definitions of (fine) art that involve context, institutions, culture and intention, determining if something actually is art.

I mean, you do have individuals (artists, curators) who are stuck on whatever mediums (and styles) people used to make art when they were in art school. You have racism and sexism at play (which ends up devaluing certain forms of art and considering crafts as “not art”). You have the biases of, say, collectors at play (even though they may not actually know much about art at all) on what’s valued. You have preferences in terms of commerce (what’s easy to sell or collect, or transport, etc.) But I wouldn’t say there’s a set of hierarchies across the art world, more contradictory sets of preferences (commercial, theoretical, personal) and prejudices. Certainly when we’re talking about the issue of ontologies, and accepting new forms into the category of fine art, it’s a matter of institutional inertia more than anything. And all that’s completely separate from whether something is considered to be part of “the arts” or not, which is a far more expansive, and less academic, category.

There’s a “high brow” versus “low brow” distinction (even when it’s not called that) - or hierarchy, if you like - that gets made in the arts in general, but very much involves value judgements. But that’s not a matter of form, per se (e.g. you can have “low brow” films and “high brow” films).

A lot of publications (including many major news organizations) put out top ten lists and give out Game of the Year Awards, but there is no gold standard, so a lot of games will end up with the game of the year title from somewhere. That said, not many publications didn’t choose The Last of Us that year.

I spent the first 25 years of my career working in video games. Mostly console and PC, later mobile. I’ve been hearing every angle on the “are games art” conversation that entire time.

Personally, I think the answer is obvious. Same as movies, some games are art and some are not. Call Of Black Ops Elite Duty 7 is no more art than Police Academy 7 is. They both contain art, in the form of textures, 3D models, etc for the former and writing, photography, etc for the latter. The net result is not (IMHO) art though because it isn’t saying anything as a whole.

Games like Papers, Please, Depression Quest, and Her Story are unquestionably art. In between there’s a lot of gray area for people to argue about. With games most of the confusion in this debate comes from people conflating the art in the game with the game itself. The medium of games is gameplay mechanics. If you want to find art, that’s where you need to look. How do the gameplay mechanics send the message? There are plenty of beautiful looking games that are not art, particularly. L.A. Noire for example, is a beautiful looking game with a unique visual style, but under that it’s just another open world driving and shooting romp. The art in the game is nice, but the game itself is not art.

It won’t be a particular game that changes everything. It can only occur as a change in the viewership. It took decades for people to take film seriously

Exactly. Older people will never believe games are art, and younger people don’t even question it. Give it another 20 years and nobody will even be having this conversation any more.

Also, who the fuck cares what is “art”. Humans create. It’s what we do. End of story.

Is any (or every) computer program art?

Many take a lot of creativity and inspiration - and it’s a long string of characters arranged in such a way as a to be interpreted by a computer. If it was written for a human then it would be a book. But, then the label with the list of ingredients on the back of a shampoo bottle - is that art?

I dunno. I’m a programmer and I find beauty in code - but then maybe I’m just a weirdo in that respect. But, yet another messaging app isn’t art to me either.

A game - at least a game that uses graphic “art” and music and has a story - well, it’s all the other elements wrapped in a coherent whole…

But, then again, art is whatever you can get away with calling art.