Why it is so hard to recycle plastic

Originally published at: Why it is so hard to recycle plastic | Boing Boing

It’s hard to recycle because the responsibility of recycling is passed onto the consumer, if it stayed with the manufacturer (and cost them money to do so) it would be very simple.

Glass is similar. Little market, and what there is is only for the clear stuff. I think you can get brown clear again, but once green it’s green forever. There’s lots of bad things like arsenic compounds needed to get even brown to clear - from what I recall in a recycling class I took in (materials/metallurgy) grad school.

BTW it was one of the more interesting classes I took - and an easy “A” as it was a 300-level in the ecology department. Everyone should take that class. Especially as we spent a week on lead-acid battery recycling, including videos of guys in raincoats smashing them up with sledgehammers. How much fun is splashing sulfuric acid everywhere?

So those companies that give you a home bin & then pick it up & claim to recycle your plastics for you…are they for real?

Our county’s recycling program defines recyclable plastic in vague terms: “it can be recycled if it has a neck”. In addition the products need to be clean, and the bits have to be large enough so they can be carried successfully through the machinery without jamming or slipping between the belts. Nobody said anything about containers that held pesticides or harsh cleaning chemicals. But whatever, they can’t be “stringy” or “filmy”. Don’t drop something in with a glued-on aluminum foil seal. And what about bottle labels, bottle caps, and bottle cap rings? Oh, and black colored plastics can’t be recycled at all.

The confusing mix of plastics and rules makes it impossible for average people to drop the right things in the bin, and that’s just the officially acceptable stuff. Unfortunately, my better half drops everything plastic in the bin, which I have taken to calling “wishcycling.” She assumes it’ll all get sorted out at the other end, even though the machinery and technology to sort and process it don’t even exist.

On the other hand, I think our plastics go to a local manufacturer of composite decking, who uses it as filler. They grind up just about everything they can into a pelletized mess, heat it, mix in virgin plastics to act as a binder and to hold the color, then squeeze out not-terribly-rigid 16’ deck boards. Which is to say it’s recycled and captured, just not in a way that’s as permanent as the oil they drilled to make the stuff in the first place. So most of it will end up in a demolition landfill in about 30 years instead of a regular landfill today. 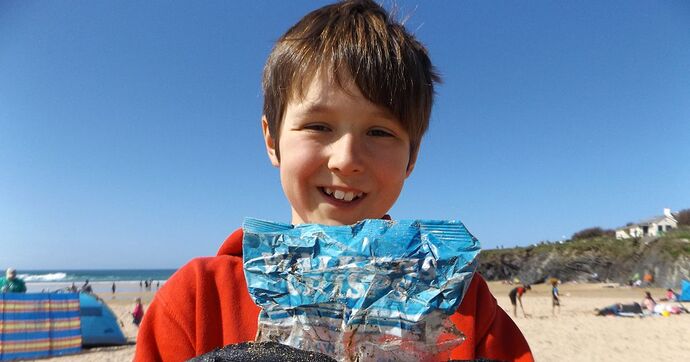 Volunteers were "shocked" to find it

Nope. Recycling plastic has always been a fiction. For a little while in the early 2000s, China was buying all the world’s garbage and that’s where all our single-stream recycling went. What were they doing with the plastic? Burning it in big piles in poor neighborhoods.

In 2018 they stopped buying, and now nobody does. It all goes in the landfill, but municipalities keep the recycling illusion going because it took a lot of effort to train everyone to recycle and we don’t want to lose that. We keep doing it in the hopes some solution will be found.

Recycling plastic is chemically virtually impossible. At best it gets downcycled into shitty carpet and park benches with substantial energy input that is definitely not worth it. We must stop using plastic as much.

Reduce is the first word in the catch phrase for a reason.

A bit shocked that I was able to read (paywall wise, thanks just the same as I only tried it in English) that brief Atlantic article!

I mean, there are markets for those unsorted recycling bits somehow, but something quite possibly happens to them other than making grungecore clamshells for inedible things (non-Oishii strawberries maybe, or their picker boxes.)

Then there are plants that definitely haven’t been built out yet, for this years’ choices of enzymes or catalysis that take PET down to the ethylene and components of the terepthalate (plus separations,) briefly turning the stream o’ plastic into plasma (all solar/wind arc conversion please) and getting graphene out, digestion (we see you, LGBTQ-positive Oreo wrappers,) and far translations into lignin or cellulose. Where are the parlor tricks and farm know-how to trivialize these things (haven’t figured out asterisks, so not counting the nice license from the authors who published open access, parenthetical note,) queued again, the textfiles corners of Mastodon?

Then there’s tryhard-ing everything into 3d printing filament. It’s a self-repairing tractor and preemptive launch vehicle (why is it so hard to Eastern EU,) all over again, yay!

Ugh and here I was going through so much effort to clean and sort the #1 type plastics. Would love to see more cities and states implement “extended producer responsibility” laws.

I used to have a plastic maple leaf. I found it when I was volunteering with Sustrans, building a fence along the side of a cycle path. The path crossed over an old landfill site that should have been capped with 3m of soil. Well, we were digging 60cm holes, and we found all sorts of plastic - including 30 year old crisp packets you could easily still read. A plastic leaf seemed like the perfect find in this treasure trove. It used to hang from the saddle of my bike, but sadly somebody nicked it.

This is the real solution to the problem. Force manufacturers to take responsibility for their own negative externalities, instead of privatizing all profit and socializing all costs, as we currently do.

We were on the verge of doing this in North America at the start of plastic packaging, which is why the beverage lobby got together to create Keep America Beautiful, made the “crying Indian” ads, and convinced everyone that plastic waste was our fault. It worked better than their wildest dreams.

That strategy continued in every industry, such that everyone thinks that all environmental problems can and should be solved by individual consumer choice, which is absolutely batshit nonsense. Government regulation is how you solve negative externalities at scale, which has always been the case. Corporate lobbying convinced people otherwise and it will doom our grandchildren to a boiling planet.

But you don’t even really need to recycle glass in the sense of breaking it down. In a lot of countries glass bottles are simply washed, sterilized, and reused by bottling plants. That’s just not a thing in the US for some reason.

More than 10 years ago I owned a plastic recycling company. We were looking to expand into new markets when I read about a scientist in Japan that had built a machine that turns plastic back into oil for about $10 a barrel. It took about 4,000 lbs of plastic per barrel and the oil was almost as pure as it gets. The outgassing from the process could be used to run heat or generators for facilities and the remains from the plastic was ash about the size of a small foot stool. I was pretty excited about the process and started contacting companies that were making the machines. There was a small town in Canada that had put one in place, and they were heating the town with recycled oil. The more I read the more excited I got. This was going to change recycling plastics for good. Then reality set in. The oil companies own all of the refineries in the country and they refused to buy back the oil, because it was so “pure” it didn’t “fit” into their processes. So the solution is available, but you need to get the oil companies out of the way first. One more time Big Oil kills the planet.

I think that was a thing here in the US when I was a kid. I remember that Coke and Pepsi bottles had a 10 cent deposit, and as a kid, if you found one on the ground, you could take it to a local supermarket and they would give you a dime for it. Cash money! Even earlier last century, wasn’t this the case with milk bottles too?

Unfortunately, my better half drops everything plastic in the bin, which I have taken to calling “wishcycling.”

Ha, I like that term, I’ll start using it too. The rest of my family does the same thing. And I see the recycling bins out on the street in front of people’s homes each week filled with wishcyclables, things like blocks of styrofoam. I mean, that will never get reused or recycled, right?

I think that was a thing here in the US when I was a kid. I remember that Coke and Pepsi bottles had a 10 cent deposit, and as a kid, if you found one on the ground, you could take it to a local supermarket and they would give you a dime for it. Cash money! Even earlier last century, wasn’t this the case with milk bottles too?

It still works this way with beer bottles here in Poland. It’s about 0.12 USD per bottle.

as a kid, if you found one on the ground, you could take it to a local supermarket and they would give you a dime for it

OTOH, I remember accidentally breaking a deposit Coke bottle at a relative’s house, and freaking out that I had deprived them of their nickel/dime. (For frame of reference this was, I believe, during the Bicentennial.)

things like blocks of styrofoam. I mean, that will never get reused or recycled, right?

Bart Hopkin is a builder of experimental musical instruments and a writer and publisher on the subject. Hopkin runs the website windworld.com, which provides resources regarding unusual instruments. Hopkin published the magazine Experimental Musical Instruments for 15 years and published several books and CDs specialized in a specialisation of certain types of instruments, such as wind chimes, plosive aerophones and marimbas. For these publications, Hopkin regularly asks experts on the subject ...

A styrophone is an acoustic device made from expanded polystyrene foam (often referred to by the genericized trademark Styrofoam). There are at least two varieties: The musical Styrophone is a type of friction idiophone created by Robert Rutman in the 1990s as a parody of his well-known sheetmetal instrument, the Bow Chimes. It consists of a foam box from which protrude a series of thin brass rods played with a violin bow. Rutman's ensemble would build the impromptu instruments prior to a perfo...