Imagine everything that fish has lived through and seen

Now including being forcibly ripped out of the water into the air where it can’t breathe for 6 minutes. I just don’t understand how catch-and-release is seen as humane. If it is, let’s switch it around and hold fishermen underwater for a few minutes but then toss them back up onto land.

Agreed. OTOH, I am so relieved to read that she was released!!!

Hard pass! Way too much PCB and mercury in that old lady of the river. Especially if she ever hung out down by Zug Island!

This gent probably should have left the fish in the water for the photo op.

In BC, any sturgeon over a certain size can’t be removed from the water (I think it’s 5 ft). It’s an effort to reduce the impact of C&R on the species, without closing fishing opportunities completely.

Sturgeon are cool looking fish. That one is a monster!!!

These were researchers doing a survey checking the health of the fish population.

Now including being forcibly ripped out of the water into the air where it can’t breathe for 6 minutes. I just don’t understand how catch-and-release is seen as humane.

I agree. I wouldn’t be surprised if the stress of being caught ended-up having a fatal toll on the old girl, the same way elderly humans often end up dying after a major incident like a broken hip.

I can’t fish anymore for that reason. I fished a lot when I was growing up for fun, but now I just don’t see the pleasure in causing so much distress to some helpless creature when I don’t need to.

Considering my dad literally catches around 3000 crappie and other fish a year out of his local lake, it doesn’t seem to harm them at all. YMMV.

Catch-and-release is nothing-more than torturing animals for pleasure. It would be like shooting deer with rubber bullets.

My disinterest in fishing started when I learned to dive and watched up-close interactions in the fish world. It’s literally a fish-eat-fish world down there, and any sign of weakness is pretty much fatal.

Also, fish appear to make cross-species friends, and work cooperatively within certain groups. They’re smart but certainly aren’t getting any breaks from human impact on the planet.

I’d catch them by the bucketful too in N. Michigan, but I just got to a point where I asked myself why? I never was big into eating my catch, never liked cleaning them. I got to the point where it just seemed gratuitous harm inflicted on an animal. If I’m going to engage in that kind of activity, it’s going to have to be for a practical reason other than 'because it’s fun".

"The months of August and September furnish a plentiful supply of prime sturgeon. This fish attains a great size. Some of those we took were eleven feet in length; and, with the entrails out, weighed from three to four hundred pounds.”

and: “Biologists once measured a white sturgeon caught in the Fraser River, British Columbia, to be nearly 14 feet long, weighing over 1,500 pounds!”

To me, this is a strong argument for just leaving Sturgeon’s alone, as other’s have said. In the last 150 years we’ve had enough impact on their species to last another 150.

Sturgeon steaks and caviar were big business here in the D ~100-200 years ago: 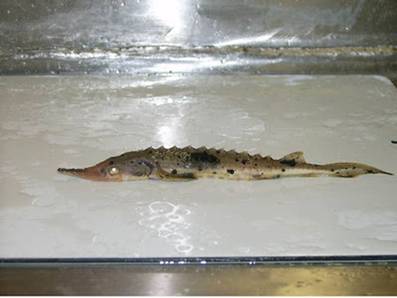 Before that they were a nuisance for fishermen through getting tangled in their nets. Apparently they burned them in big piles or even used them as boiler fuel.

or even used them as boiler fuel