Originally published at: 17-inch laptop the size of a 12.5-inch laptop after folding in half | Boing Boing

I’m still trying to figure out the use cases for this laptop. Maybe I’m just too old to understand this product.

i was too “thick” to get the shtick here, so i found this gif. Obvious once it’s explained to me ‘like a five year old’: the unit is carried about with its keyboard “taco’ed” in the folded screen. You remove the keyboard, flatten the folded screen, turn the flattened screen ninety degrees, and you therefore have a larger then usual screen. (initially i thought the screen might’ve been folded over twice)

Interesting take on it; I wonder if it can operate as a tablet as well?

I’m with you on that. Seems like a solution in search of a problem and form over function.

Also foldable OLED displays don’t exactly have a great track record for reliability or durability especially at the fold point.

But what do I know? Maybe someone will figure out some kind of interesting use case for this.

It will fit in a regular sized laptop case.

I have a 17" Asus that I LOVE, but it doesn’t fit in the laptop case that I have. I have to put it in sideways and have it sticking out. I know: could be solved with a new laptop case!

Clever of them to choose a picture for the screen that disguises the fold line.

Is it even a laptop if you can’t use it on your lap?

Neat, but I worry that the keyboard might not be as responsive or durable, this is despite the folding screen having its own durability issues. It’s a neat concept but I suspect they’re going to be iterating this form factor several times before they get it just right.

I mean, the screen is folded twice if you count taking the screen off 17" mode by pulling off the keyboard on the edge (which then gets tossed over half the screen and puts cheeto bits or ramen toppings all over the 12" overfold screen and squished noodles on the bottom.)

We still need work to get to the sphere inversion case where one tucks the screen in 12 places to flip the inside CrabVision™ screen out and replace the outer screen (or fuzzy pet seat. Or ramen topping staging.) But the important thing is that Rob took a break from retro 7-bit nostalgia, I suppose.

Is it even a laptop if you can’t use it on your lap?

Probably why the “laptop” designator has fallen out of favor over the past few years largely replaced by “notebook” as the commonly used industry term.

It’s a computer with a screen that folds and which can be configured several ways. What’s not to understand?

That’s because of the heat; most notebooks will still fit on your lap if you’re not concerned about sterility, yeast infections or seared thighs.

I’m definitely in the risk-averse-conservatives-who-hate-fun category when it comes to PC hardware design; but seeing the three-layer transport configuration makes me wonder whether there’s a simpler and more robust implementation to be had from a normal clamshell laptop design paired with a minimal bezel portable monitor designed to clip on to the back of the clamshell for protection(extra credit if it can be attached either to the top or side for either stacked or side-by-side dual monitor during use, and no need for a separate stand) and sized to match the internal panel.

It’d be less futuristic looking, to be sure; but skip all the aspects of this that aren’t mature and reliable; and also offer the option of omitting the secondary display and carrying less hardware if you want; rather than this device’s ‘laptop mode’ where you just put half the screen under the keyboard(and you did keep the keyboard module scrupulously clean and free of grit, so it’s not abrading the screen while you are typing away, right?).

(Also, if the vendor utilties included with the Asus products I’ve dealt with in the past are anything to go by; I suspect that “ScreenXpert” mentioned in the below graphic will range from somewhere between ‘a bit rough, pretty much works with windowed applications’ and ‘curse all the gods and Asus’ developers while abandoning hope’) 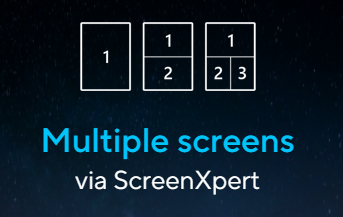 It never ceases to amaze me how having good industrial design in hardware rarely ever translates to also having good software.

Fold it enough times and it will reach the moon.

Its ingenious multiple user modes are limited only by your imagination

So can I use it as a parasail? Or kayak down the Amazon on it? Can I fold it into a hat?