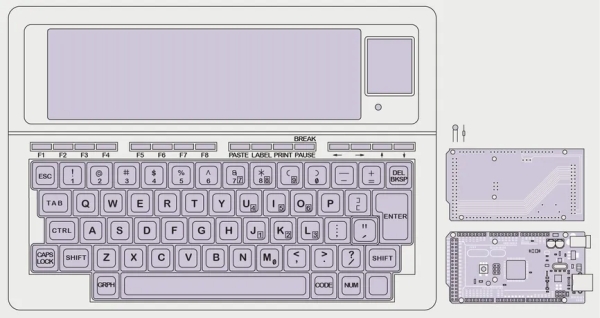 When [Stephen Cass] found himself with a broken Tandy TRS-80 Model 100 portable computer, the simplest solution was to buy another broken one and make one working computer from two non-working comp…

Aw, man, I loved my Model 100. I wrote the introduction to Secrets of a Superhacker on a beach and emailed it to the publisher in the early 90s. One of those moments where I felt like I was living in the future. In 1993, when AT&T started running its “You will” campaign (e.g. “Have you ever sent someone a fax… from the beach? You will.”), I would respond to the TV “I already have.”

This was my dream machine when I was a kid - bought it recently on auction.

Absolutely useless now, but love the feeling of simpler times when computer can run for days on AA batteries. It feels great in hand.

That was a fine article (with nice pictures - though no actual photo of the result), but it’s really Hackaday level stuff, and that’s not a compliment in my book - the average reader there has the attention span of a goldfish and the knowledge and depth to match.

I seem to remember much deeper and interesting stuff there…yeah, old man grumping around.

As for the Teensy 4.1, that’s an absolute beast - using one for my SDR project - and at 600 MHz it can support much more than “basic text editing”!
Mr Teensy (Paul Stroffegen) has done an amazing job to bridge that powerful and complex processor with the Arduino world, and opposite to 99% of Arduino library, his code is actually worth reading.
Not that I use any of it - bare metal or RTOS is my playfield - and I sorely miss real debugging capabilities.

EtA: About IEEE spectrum, stuff like this: Story of the Greek Wiretapping Scandal - Schneier on Security - unfortunately the spectrum article is now behind a paywall.

I loved this form factor of machine. They were something you could throw in a small bag and not really notice their weight at a time when laptops were incredibly heavy and had tiny battery lives.

I’m not sure if the Tandy 1000 came to the UK or not, but we had Sir Clive Sinclair’s last computer - the Z88 which seemed to run forever on four AA batteries. Incredibly - it did not suck, in fact, it was magnificent.

As many other things we surround ourselves with, that give us pleasure (so not useless?).
At least cheaper and less polluting than a sport car.
But, OK, this, said from someone with my username is probably expected.

I have one of these on a shelf with a bunch of other portable machines. I used to get on bbs’es with this.

’m not sure if the Tandy 1000 came to the UK or not, but we had Sir Clive Sinclair’s last computer - the Z88 which seemed to run forever on four AA batteries. Incredibly - it did not suck, in fact, it was magnificent.

That was eight-nine years after one of our users posted from his sailboat in Bermuda using his Model 100 to a local X.25 dialup, then to Montreal. (Which was really cool for us for a minute until the “collect call” nature of X.25 connection costs sunk in.)

Damn - I should never have watched that video, I’ve just been to eBay to look at the prices for working Z88s!