So: as we’ve been reminded, many, many times, the mass media in rich countries routinely denigrates or ignores mass protests. That the BBC ignored a demonstration outside its windows scarcely seems like a surprise.

WRONG! It’s been on the front page since yesterday afternoon: 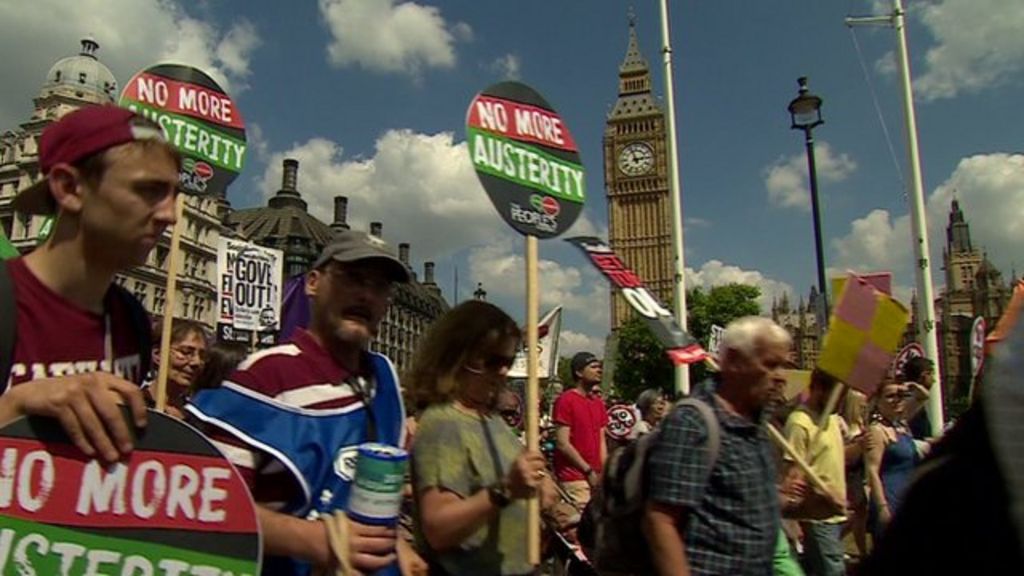 Campaigners say thousands of people went to an anti-austerity protest in London.

“First the ignore you…”

I don’t care if it was said by Mahatma Gandhi or Nicholas Klein, the progression is the same. The people of the U.K. needs to keep pushing more and more for their rights and common sense.

The moment the BBC starts calling anti-austerity protesters something like anarchists, philo-terrorists, communists, fascists, or unwashed hippies and hobos you will know you are winning.

KEEP CALM AND CARRY ON PROTESTING

KEEP CALM AND CARRY ON PROTESTING

From an article on Wikipedia, Protests against the Iraq War

According to the French academic Dominique Reynié, between January 3 and April 12, 2003, 36 million people across the globe took part in almost 3,000 protests against the Iraq war.

And the war proceeded, right on schedule.

Protests, by themselves, are not enough. Total loss of confidence in the government is not enough. There actually has to be a popular alternative, with sufficient organization to bring it to life.

Only 100,000 in Washington DC? Man, for a 350 million country that´s a quite small protest. A VERY small one.
Also, protests are meant to make change on the long run, not the short one. It is about visibility, change of perceptions and popular awareness. Gandhi never intended the independence of India for the next Monday at 9 a.m.

Sadly true; worse, for the US, it was extraordinarily large. On the other hand, the protest in London was proportionally much larger, the government ostensibly center-left, and the UK still participated in the war.

Also, protests are meant to make change on the long run, not the short one. It is about visibility, change of perceptions and popular awareness. Gandhi never intended the independence of India for the next Monday at 9 a.m.

No, there was indeed a protracted struggle for the independence of India. But Gandhi’s non-violent strategy was more than simple protest. Moreover, there was a broader movement beyond the wing led by Gandhi, including large-scale labor actions and armed struggle.

You are right, but I never said protesting was the only tool.

So what you are saying is that the BBC reported on it a day late, and initially got the numbers protesting hopelessly wrong.

With the way they are currently reporting, I’m really beginning to believe that the current BBC is MI5 News.

They’ve basically been pravda for the coalition for years now. Remember the NHS bill that went unreported in favour of a boy band splitting up? Fuckers.

Protests, by themselves, are not enough.

Quite right, civil rights in the US were partly due to MLK offering a peaceful path which required doing the odious act of recognizing the humanity if not equality of African Americans, but it was acceptable only in the face of fear of an ascendant black militancy. White society reluctantly took the easier medicine rather than face an armed insurgency with an imagination of how terrible a race war with the unrestrained hypersexualized violent uncivilized jungle untermensch would be. If you want a a vanilla taste youtube the Archie Bunker show for some relevant period pop comedy.

Let’s hope something happens in September that is too big for the BBC to ignore.

So what you are saying is that the BBC reported on it a day late, and initially got the numbers protesting hopelessly wrong.

Let’s go back in time five years. Suppose Russel Brand had stopped for coffee and chatted with some people about his latest movie. Do you think the BBC would have been a minute late with that report? When you are a day late, that’s a day of people saying, “Hey, why didn’t this get into the press?”

And the war proceeded, right on schedule.

Protests are very slow. Going to war is surprisingly fast. But now even Glenn Beck says the protesters were right. The mechanism of protests is not having the government listen, it’s building a story in the minds of the public so that the government has to one day listen or be voted out. Having massive demonstrations go unreported is a fairly incredible counter-strategy. (And it doesn’t matter that I don’t think that it was actually any person’s strategy - there doesn’t have to be an actual conspiracy for pressure to go a certain way)

At least the rightwing in the UK thinks that the BBC has an unacceptable leftwing bias. If both sides think that they’re being discriminated against it’s the mark of a good compromise in my book.

The powers that be do not care at all. They hate the populations that they have to share the nations with. Turn off the BBC. We need a media of our own. We need to lead and support representatives of our own. The whole system is complete broken for us the majority.

I agree with you, in fact protest is not only not enough, it’s practically worthless. I’m sure the bigwigs just treat it as letting people have a walk in the sun, same as if it was a sponsored walk. They’ll be back at work tomorrow and everything will carry on as normal.
I think what’s needed is something that sticks in the craw a little more.
Something like occupy.

I’d agree with you in theory, but we have a lot of examples of exactly the opposite happening. There was a shitload of activism and protest and winning hearts and minds in the 60s, and we find ourselves more warlike and more conservative now.
Iran used to be a blossoming multicultural country not so long ago. Ditto Egypt. I’m sure there’s a bunch more.

‘Media Protocol’ - the BBC’s as a publication have an agenda and they also have a reputation to upkeep. Now when they sacked Russell Brand from BBC’s Radio 2, do you think they were going to have any association with him after this point? The answer is NO. they wiped their hands of him, and even if the ethics, morals and ethos Brand is trying to promote our “Newsworthy” and or righteous is besides the point. The Story simply doesnt concern them, and its not their lawful bound duty to cover any story from today until the end of time. Furthermore, the trend under the hashtag “#mediablackout” is a standard reaction from fundamentalists of any background (political or otherwise) to the Media, even though, granted some things should get coverage when they don’t. I think that the -OVERIDING MESSAGE IS-
THE MEDIA IS NO LONGER REQUIRED WHEN WE CAN UTILIZE THE POWER OF SOCIAL NETWORKING. Over and Out Xox