I hope a drum circle shows up on the beach and stays for a long, long time.

this sort of thing calls for punitive damages.

Threatening people with private security on public property they aren’t entitled to protect seems like several criminal charges that should have been filed.

Why just the beach? If public property if free to block, just block all public roads leading to his land. I suppose a guy like that uses a helicopter so he can get in anyway, but I doubt he’ll enjoy having to ferry in all goods and staff via helicopter as well.

The scary thing is that some sheriff’s departments seem to be complicit in helping private landowners assert their non-existent claims. Even when you know you’re in the right, it’s hard to argue with a man with a badge who has the power to sling your sandy ass in jail.

just block all public roads leading to his land.

Even when you know you’re in the right, it’s hard to argue with a man with a badge who has the power to sling your sandy ass in jail.

You can beat the charge, but you can’t beat the ride.

Oh. What a shame.

I hate that you rarely hear about the disposition of these incidents, so in case anyone is curious:

The driveway dude plead down to misdemeanor charges from the original felony charges, got 3 years of probation, 30 days of public service, anger management treatment, paying restitution for the broken phone, and one year of alcohol abstention. 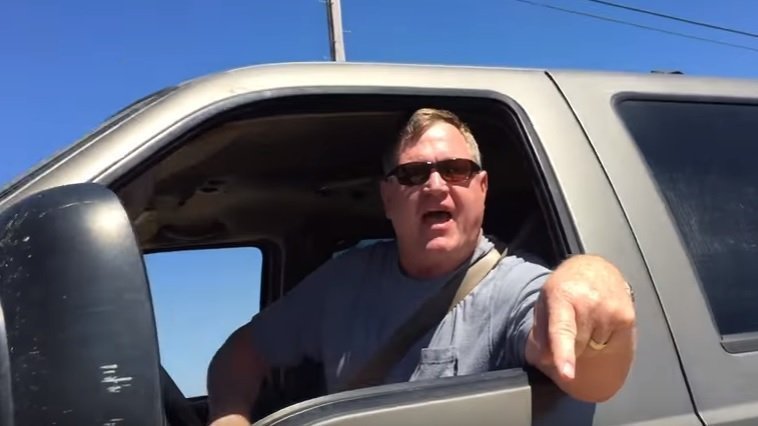 A Ramona man arrested after an ugly road rage incident was ordered to undergo anger management treatment after he pleaded guilty to charges stemming from the July encounter.

Man, that was a frightening video… Something about being in a vehicle makes people capable of rage they wouldn’t otherwise have. Reminds me of an incident I had in BC about a month ago where a guy in a Maserati stopped in the road and repeatedly yelled at me, “No one fingers my wife!” after I had flipped him off (he had honked at me for daring to parallel park with my signal on). I regret flipping him off, and I’m glad it didn’t escalate any further.

This guy is a true (bOINGbOING) gentleman.

I’d have to imagine the local city deferred to him about using his private enforcers to keep the rabble away and wasn’t about to disturb him by suggesting he comply with the law like other mortals lest he buy up the entire city and fire them all.

I used to live in a beach front apartment and if the owners had tried blocking off the beach in front of the building, I’d have expected cops there in about five minutes with orders to remove the barriers and the city to come out and remove them in about a day at most.

We now live in times when the word "privilege’ has returned to its original meaning of “Private law”. One law for you and me, another law for the very wealthy and other laws for those in power.

Indeed. He had an unlawful private beach for 7 years. I’d say that’s worth $100k a day. So charge him $255M. He’s a billionaire so he can afford it, but it also incentivizes him to knock it off.

Lets make sure we are discussing the real story and not a version of it that is a little spun. When I read this I was outraged that someone was kicking people off a public beach. I then read more stories with a little more depth about this case and even read some of the case filings. He is not posting any guards or gates on “public property”. If he was, then his guards would be arrested for assault and if they touched someone, battery. That is not that is happening here. The gate he is closing is a gate across a private road that he now owns. The road was always private property and the previous owners charged people for “parking”. He bought it and is apparently not interested in charging a toll. Although they seem to have successfully stopped him based on his closing of the gate itself with this permit ploy, all he has to do, is return the same arrangement as before and merely charge a $1000 toll. It is not as clear cut a case of abuse as it seems and in my opinion, the guy has a valid argument to make that will be hashed out in the courts as it should. For some context, there is a private island where I live full of multi million dollar apartments and a country club. When I was a teenager we would windsurf to it’s beaches and sit on the sand to relax and rest before the sail back. When the guards came barreling down to run us off the beach we explained to them that the federal government owned the land between low tide and high tide and that they could not kick us out. For weeks we would sit there with a hilarious looking group of guards leering at us but eventually they gave up and did not bother us any more. The beaches are public, but this guy should be able to do as he wishes with his private land.

It took Mark also posting this for me to notice this brilliance of yours, @doctorow:

That URL! *kisses fingers in the manner of a stereotypical Italian chef*

Isn’t “thugs terrorising the community” the sort of activity that inspired the local police force to create a special unit(that typically degenerates into unnacountability and extrajudicial use of force, but so it goes…) when you are poor and more colored about it?

That would’ve been my discussion with the private security. About how I would press charges against them individually (not some millionaire who hired them). Get restraining order against them personally etc.

I agree that it’s complicated, and partly complicated by the California Coastal Act, which not only protects beaches but requires that the public have access to beaches in California. My understanding is that the road is the only access to this property, though I haven’t read the case filings. Here’s an interesting article about the creation of the CCA:

Why California's Beaches are Open to Everyone

Next time you wiggle your feet in the coastal sand, remember that there's a reason why California beaches are open to the public.