Originally published at: A community is surprised as displaced homeless people return to convenient places to encamp | Boing Boing

With somewhere between 40-60k homeless people in L.A., this game of encampment whack-a-mole will continue unless every parking district in the county has at least one tiny home village and one motel or apartment complex taken over by the city.

There are different causes that make people become homeless. Lack of affordable housing adds up to other problems like mental problems or drug addiction.

If people in need can access to social housing and homeless shelter you have less people sleeping on the parks.

Housing First is the starting point – actual housing, not shelters (which don’t work and which homeless people actively avoid). The various Housing First communities should be targetted to address the main problem that put the individual on the street.

So, for example, a drug addict might be offered a spot at motel A, which is focused on sobriety and/or harm reduction; someone who just had a bad run of financial luck goes to tiny home village B, which is focused on getting them back into a job and then a rental or public housing situation. Mixing the two in the same Housing First situation is a recipe for shelter-style failure.

Here’s an approach with potential I happened to read about the other day. 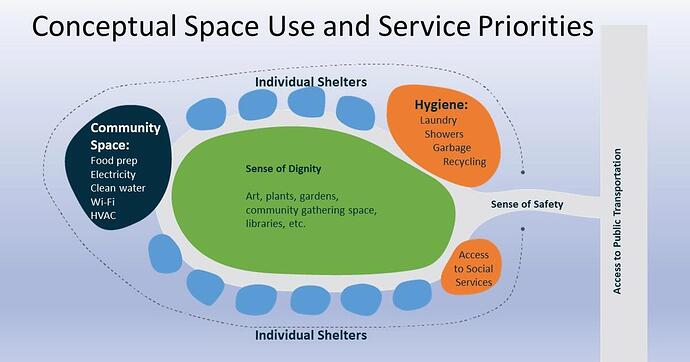 I’m curious why this seems to be a huge problem in a lot of places now. Did governments really just look at the social housing built in the 50’s/60’s/70’s and think “yup, job done.”? It certainly seems like it.

I think there’s something more sinister than that.

I think a lot of people who own housing started thinking that more housing to go around would dilute the value of their housing and so fought housing expansion tooth and nail.

We need to find ways to make actual housing available to people.

Have they considered un-banning building and living in the kinds of housing that people with less income would have been able to afford before communities around the country zoned them out of existence between the 50s and 80s or so? Often under the guise of improving housing quality, even though the (economically obvious) result isn’t 'better housing for all" but “no housing for some”?

I’m curious why this seems to be a huge problem in a lot of places now.

Largely because housing is more unattainable than ever right now. Traditional “middle-class” housing in places like California is out of reach for anyone who isn’t rich and lower-income people are priced out of housing entirely. The few social safety nets we have in place weren’t designed to cope with the influx and there hasn’t been the political will to build more.

The problem is, we’ve turned housing into a casino for new classes of property buyers. One are the corporate investors, sometimes banks, sometimes private equity and hedge funds that help retirees grow their wealth through the captive real estate market. Another is people that managed to buy or inherit housing early. Both of these have zero self-interest to permit the existence of lower cost housing anywhere near their investment property. If you’ve managed to attain a house, even if you were struggling to before, your perceived self interest is to let the shortage get worse so that your property will rise in value. (Granted, it also makes getting another property more difficult, but we aren’t always great long-term thinkers) In our dog-eat-dog society where we have to get wealthy anyway we can, as the traditional ways of just getting a degree and a job leading to a house and family are all but dead here, we reluctantly or wholeheartedly accept that property is now a lottery ticket, not a right.

The current problem is due to private corporations buying up loads of houses after the 2008 crash and jacking up the rents. When the bottom falls out of the market again, that will happen once more, making the problem worse. It’s not just an urban problem now, either. I see entire families panhandling in my suburban community now on a pretty regular basis.

The problem is not the government except for it’s lack of regulation of housing. It comes from treating housing like a commodity rather than a human right. This is the outcome when you turn every aspect of human life over to the market and treat markets like they are infallible forces of nature.