A fantasy console dev kit in your pocket

Originally published at: A fantasy console dev kit in your pocket | Boing Boing

Does that keyboard seem totally unusable to anyone else? Like it’s supposed to be thumb driven but my thumbs would just smoosh a whole quarter of that board at a time.

Does it come with “Don’t Panic” written in large friendly letters on the cover?

Does that keyboard seem totally unusable to anyone else?

Yeah. I can’t imagine trying to write code using that.

At least they refined the ideas from the Pocket C.H.I.P that I got years ago. That keyboard was pretty rough. And it was at the time the easiest way to have a portable version of Pico-8. I do like this build better. 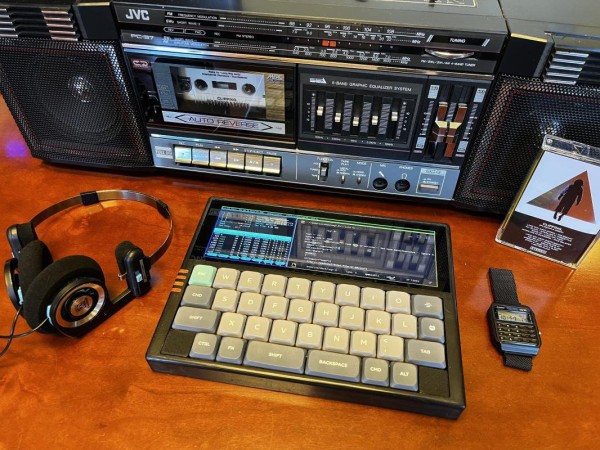 The slabtop form factor has had a resurgence in the cyberdeck community, and [Greg Leo] has designed the QAZ Personal Terminal to be about as small as a slabtop could be while still having full-siz…

(Banana Pi-based for a change.)

I have so many thoughts on Pocket C.H.I.P…

OK, I will say that if anyone ever wanted one, I have one stuffed in a drawer that might not have yet inherited their eventual propensity to stop booting correctly.

But, does it come with one of those 90’s oversized headphone in-line controls with a mini screen (as seen on CD and MD players)? It really should to complete the package.

It looks very like their DevTerm keyboard, except with fewer keys (they’ve dropped most of the punctuation-only keys on the right hand side). Which I think is a win, since the DevTerm’s biggest single flaw is that it’s simply too wide to hold while thumb-typing, and having to use it on a table renders it kina pointless (and it’s bad at touch-typing for a number of reasons).

That said, although the DevTerm uses dome switches, the keys are surprisingly OK. There’s no comparison with something like the Pocket CHIP keyboard, which is strictly for looking at.

All these things are toys, but I suspect this uConsole will be more fun than the DevTerm, which itself is pretty fun. I am slightly worried about that reduced layout though, as they’ve made some odd choices and nothing is quite where it should be (e.g. ASDF is offset to the left of QWER, instead of to the right). I guess I will find out early next year, because I reflexively preördered one as soon as I saw their email.

The other thing I can’t overstate is that all these ClockworkPi things are like really nice Japanese model kits. They’re almost worth getting just for the delightful assembly experience, even if you don’t really play with them afterwards. (For the curious, you can’t go wrong getting their GameShell kit). I have basically no qualms in shilling for them for free.

I also have one from the Kickstarter, that is in a drawer until the delivery of my round tuits

Yeah, my first thought was “that’s a deck.”

Keyboard is tiny, but you’re supposed to use the direct neural interface with a deck.