A look at how the German propaganda machine spun D-Day

Originally published at: A look at how the German propaganda machine spun D-Day | Boing Boing

Fox News, decades before Fox News existed. I can imagine the chyron banners they would have run along the bottom of the screen:

"Lindbergh in U.S.: ‘Why does permanent Washington hate Hitler so much?’”

Okay, I didn’t watch the video because I’m not that interested, but let’s be thorough here and admit that this is the American version of the German version. Propaganda is propaganda no matter if it is “our” side or “their” side.

There’s nothing wrong with anti-fascist propaganda – ever. This technique of re-purposing and commenting on Nazi films became one of the most effective counters to Hitler’s PR campaigns, starting with this famous series of films. 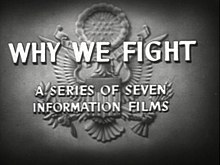 Why We Fight is a series of seven propaganda films produced by the US Department of War from 1942 to 1945, during World War II. It was originally written for American soldiers to help them understand why the United States was involved in the war, but US President Franklin Roosevelt ordered distribution for public viewing. Academy Award-winning filmmaker Frank Capra, daunted but impressed and challenged by Leni Riefenstahl's 1935 propaganda film Triumph of the Will, worked in direct response. The...

Occasionally, though, the anti-propaganda propaganda goes too far. I think that tended to happen more often when it was aimed at the Japanese end of the war than the German, because racism, of course. Anyway, case in point. I’ve seen that movie because I went to A&M and they used to show in on campus because it’s one of the few movies to feature Texas A&M prominently. It’s a terrible movie, both from a filmmaking perspective and from a propaganda perspective.

I do like the idea of “Fred Mertz, Spy for Tojo”. Still, that film’s synopsis doesn’t seem to be an example of turning Japan’s own propaganda movies back on themselves.

Propaganda is propaganda no matter if it is “our” side or “their” side.

Two things I was taught before I dropped out of my history course because of ill health.

Thanks for the input, your indifference has been noted.
Please feel free to keep commenting on videos you didn’t watch as it helps us maintain a balanced opinion.

Propaganda is propaganda no matter if it is “our” side or “their” side.

No, it’s definitely not that. I only mean it as an example of bad American WWII propaganda. I can’t find it, but I heard when I was in college that Robert Mitchum once said it was the worst film he’d ever made. Somehow, it has a 5.9/10 rating on IMDB. I’m guessing a bunch of A&M Corps of Cadets alumni reflexively rated it a 10 because Gig Em!

Oh, there’s lots of junk propaganda in the U.S. WWII library. Not every film could be directed by Frank Capra or Mervyn LeRoy or John Ford.

Coincidentally I watched one of these just last night. If one looks at the comment history of those who gave it bad reviews on the internet archive, one finds statements not completely dissimilar to the headlines in your first post.

ETA: Boy is that a clunky second sentence. Should give myself more time to wake up before posting.

let’s be thorough here and admit that this is the American version of the German version.

What?
The video is quite literally showing the German version. Adding translation doesn’t make it the American version.
Your comment reminds me of when TFG complained about newspapers printing unkind things about him when they were literally quoting his speeches verbatim.

I didn’t watch the video because I’m not that interested, but let’s be thorough

Yeah, I winced at the characterization: “…the Allied attack upon German-protected Europe…”. Sadly, the majority of Germans continued to see things this way to the very end & even after.

gracchus has it right - a persistent propaganda bubble dangerously alters perception. So it’s necessary to note the beliefs of large constituencies, however irrational, just for self-defense.

“If men define situations as real, they are real in their consequences. No matter how objectively wrong or irrational people’s estimation of reality may be, the conclusions they draw create new realities.” – Sonke Neitzel & Harald Welzer

“If men define situations as real, they are real in their consequences. No matter how objectively wrong or irrational people’s estimation of reality may be, the conclusions they draw create new realities.” – Sonke Neitzel & Harald Welzer

Or, as another individual put it, with a more pro-fascist and positive spin…

The aide said that guys like me were ‘in what we call the reality-based community,’ which he defined as people who ‘believe that solutions emerge from your judicious study of discernible reality.’ […] ‘That’s not the way the world really works anymore,’ he continued. ‘We’re an empire now, and when we act, we create our own reality. And while you’re studying that reality—judiciously, as you will—we’ll act again, creating other new realities, which you can study too, and that’s how things will sort out. We’re history’s actors…and you, all of you, will be left to just study what we do’

Use their own words against them, expose them and mock them for what they are, lest they start defining things.

“…the combined forces of Britain, the United States, and the Soviet launched the invasion…”

Yah, and motherfucking Canada took Juno Beach. Eat shit, Nazis. Not so polite now, are we.

Canada was just one more part of the Commonwealth at that point though, although being mostly white, at least they were acknowledged by historians from time to time.
The biggest part of the British Army was the Indian Army, but you never hear much about them in war films etc…

Canada is still a part of the Commonwealth, but has been a sovereign nation since 1867. You seem to be trying to minimize Canada’s role in the invasion, and I don’t know why.

Two brigades of the 3rd Canadian Division landed on that sand and faced down German machine guns, my great uncle among them. The Royal Winnipeg Rifles and Queen’s Own Rifles companies were nearly entirely wiped out in seconds.

The third Canadian Infantry Division pushed through and made it inland by the end of the day, farther than any other force on the other beaches made it.

I’m sorry, what was your point again? Something something commonwealth?