Punch more nazis, and hack them too.

The Resistance is real.

This is the kind of news/history that is heartening and healthy to read as the darkness tries to roll back in over us. The theme of thousands of stories that tell about evil empires and the common men, women and even kids who thwart the bastards. My uncles who fought in WWII, my aunts who helped keep farms and households running would recognize these heros because they themselves were everyday heros. This is for you trumpanzees, Fuck You, we’ve heard and destroyed your lies before and we will again.

Good stuff but of course if the nations of Europe hadn’t had such a history of segregating Jews and classifying us on official documents we would not have this story.

This is for you trumpanzees, Fuck You, we’ve heard and destroyed your lies before and we will again.

Sadly, I think that this ship has sailed.

Yes, but there aren’t any Nazis. There’s hyperbole, and there’s wannabes. One day soon there may be state-sponsored murder of out-groups. But even the police only get one here, one there, exactly like 2000, or 1980, or 1960.

Authoritarian governments wear many masks. The Russian government tacitly allows violence against gays and trans, many Middle Eastern and African governments actively attack them… Do you really think that it’s so impossible in the U.S.? It just takes one competent dictator and a few willing stooges in congress, and we could have a complete gutting of what’s left of the rule of law or the Constitution.

Seriously, just imagine if Trump had more than a handful of brain cells left to rub together. If the guy wasn’t such a flaming idiot suffering from early-to-mid-stage dementia, we might be in real trouble right now. Just Google Viktor Orban in Hungary, as an example - he’s not a genius, basically just a semi-competent Trump, and he’s more or less turned Hungary into a one-party near-dictatorship almost overnight.

It can happen here, and it will if we don’t keep our guard up. Trump is a wakeup call to all of us that the U.S. has a broken election system that’s too easily compromised, and that we need to put more checks and balances in place, and honestly more restrictions on who can be president and what can be done to remove a malicious president from office if congress is compromised as well.

Yes, but there aren’t any Nazis.

I am unsure whether or not that was intended as sarcasm.

Yes, but there aren’t any Nazis. There’s hyperbole, and there’s wannabes

Speaking truth to Boing? Careful or you might get unpersoned!

The more I learn about WWII the darker the whole affair becomes. And that is really saying something.

The more I learn about WWII the darker the whole affair becomes. And that is really saying something.

WWII was unusual in that one side were clearly the “bad guys”. But that doesn’t mean that the Allies were all “good guys”.

It has a lot in common with the US Slaver’s Revolt in that respect.

Total war is such a unique situation in history that it is worth much studying.

but there aren’t any Nazis.

but there aren’t any Nazis.

Is this where a rose by any other name is still a rose comes in?

I guess that label is only supposed to be applied after you’ve killed 11 Million people and devastated the lives of countless others through horrible, inhumane torture.

Personally, I refuse to just ‘sit around and wait’ for it to get that bad; screw anyone who thinks I’m being paranoid.

Personally, I refuse to just ‘sit around and wait’ for it to get that bad; screw anyone who thinks I’m being paranoid. 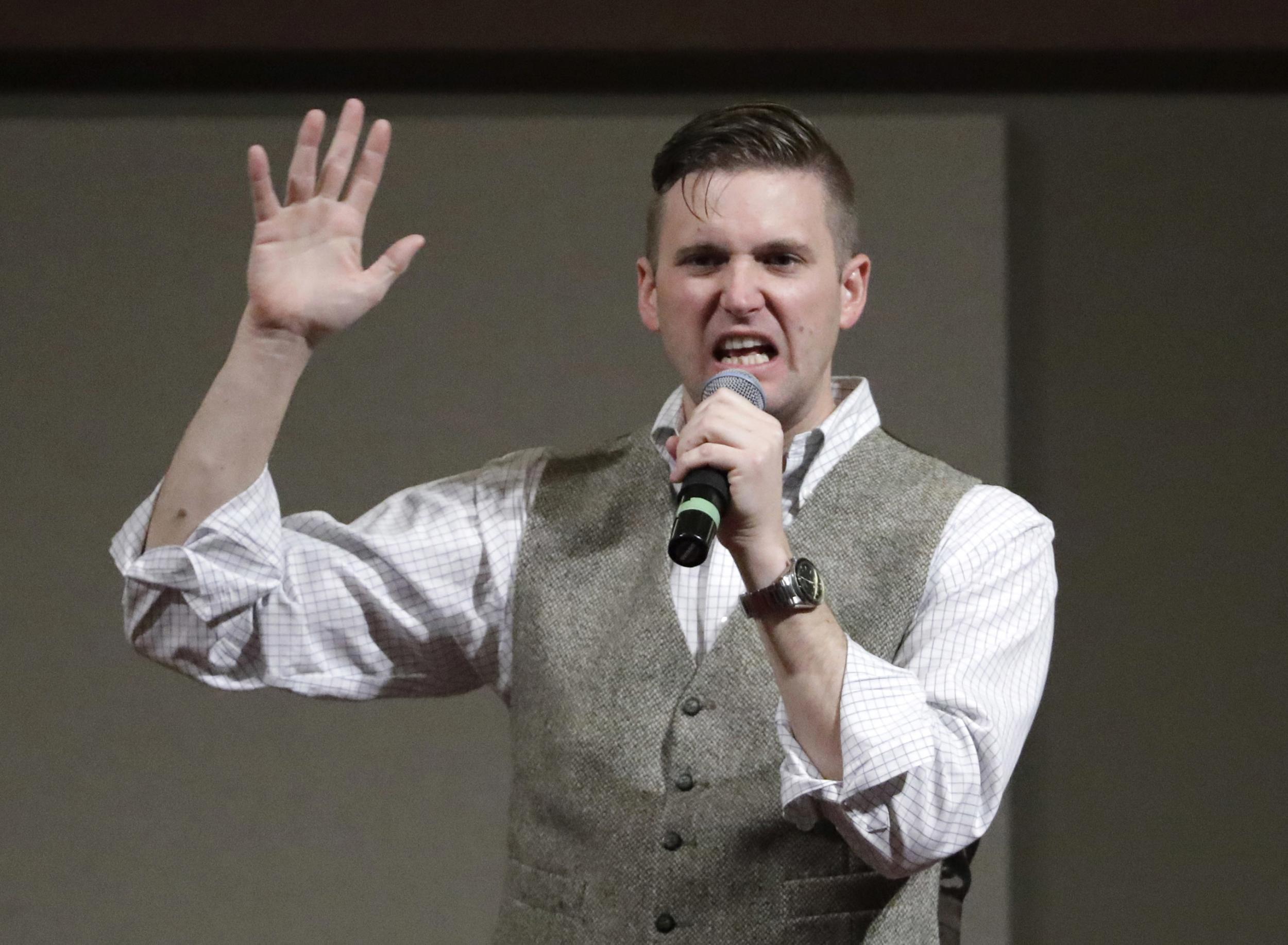 A Nazi website urged followers to target black and Jewish centres during Richard...

'The point is to confuse the situation and to create public attention, to make it feel like the entire city is taken over by our guys'

As a boy growing up in the 50’s and 60’s I had a clear sense of what Nazi’s were, Sub-human mindless followers who goosed behind an ugly, spiritually dwarfed mouth that vomited hate. Six of my uncles parked their tractors and got into tanks or fox holes. My father and two other uncles took the controls of locomotives or worked in defense plants. The herd of us kids knew what Nazi’s were all about. We sat in schools and saw films of the death camps, tried not to act scared or cry when we saw kids just like us lying dead in heaps in those camps. We drove our teachers nuts with our questions of how a people could allow that to happen to their country. We couldn’t imagine what was wrong with the German people. We got no answers but we swore we would never let it happen to us, to our country…and yet they are back. Swarming like the vermin before them, cowardly people who have never made the effort to stand for anything of value. Cowards afraid to question the false power and authority of the uber rich. I hope I measure up to what my family bought and paid for with their sweat and blood but there is little doubt that it may soon be time to find out if I measure up.

Nazis are people, and not all of them are stupid. Evil, yes, mindless, no.

They have agency. They are capable of effective strategy.

If you treat them as cartoon monsters, they’ll beat you every time.

Nazis are people, and not all of them are stupid. Evil, yes, mindless, no.

They have agency. They are capable of effective strategy.

If you treat them as cartoon monsters, they’ll beat you every time.

To expand on that point:

People seem to think "Nazi" is meant as a slur or term of abuse. It's not: it has a straightforward, literal meaning.

The following is all from this

People seem to think “Nazi” is meant as a slur or term of abuse. It’s not: it has a straightforward, literal meaning.

After WWII, there was a campaign to argue that Nazism had no real ideology, that it was just some group of people, to delegitimize it. That had some value, but its downside was that people forgot that Nazism does have an ideology, and it never went away.

Nazism conceives of the world as a struggle between races. That’s not “race” in the 20c US “black/white” sense; Jews, Slavs, Britons, and so on are all “races,” too. And Nazis believe that races have certain characteristics, which are passed on through the blood; and that they are bound to some land.

There are a few other articles of Nazi belief: for example, that acting (“the will”) is better than thinking (a sign of weaker races). And that the strength of a race is most strongly exemplified through the untrammeled Will of its leaders. (If you’re thinking, “Wait, you just made an ideology around obeying people who don’t think?” you may have spotted one of the problems.)

The “National Socialism” is a very real thing, too. It’s socialism for members of the nation. And they decide who’s in and who’s out. Government subsidies for “good, decent people?” Sure. Just don’t give it to those parasites.

So here’s the important thing: These ideas make up Nazism. You don’t need to wear a swastika to believe in them.

And here’s the other important thing: If you’re in the US, you may have grown up hearing “Nazis are the bad guys” without learning why. Or you may have learned about concentration camps, but not about what happened in the ten years leading up to them.

When the Nazis came to power in Germany, they didn’t build camps. They passed laws restricting jobs for “non-German” races (nations). They argued that money spent on the disabled was simply a drain on society, and we should move them to hospitals. They held angry public rallies which often included violence.Their leaders and militias flaunted the law, because they knew it didn’t apply.

They saw who they could kill and get away with, and gradually, over time, expanded that. They encouraged “voluntary self-deportation” of unwanted Jews, by banning them from holding jobs. When no country wanted a few million refugees, it was their proof that nobody wanted the Jews.

So camps were started up as administrative holding centers, where they could be put to good use – that is, as slave labor. The disabled, moved to remote hospitals, were out of sight and out of mind: so that’s where they did their first experiments of mass murder.

I could go on about this for hours, but the point is: this was a story of an ideology which did exactly what it said on the label. Not by showing up one night and starting to kill people, but slowly, gradually, building up public normalization of what they did.

When I refer to Nazis in the US, I am not using this as some kind of generic slur against people I disagree with. Nazis are people who subscribe to the ideology of Nazism, plain and simple, whatever organizations they do or don’t affiliate with.

Nazism is an ideology fundamentally inimical to everyone who isn’t a Nazi. It is a known and proven threat to life. “Punching Nazis” is a way to signal to them that their ideology is not welcome in the public sphere, to keep them quiet and afraid.

If Nazis are extremely few in number, and very reluctant to speak, then their public speech becomes an opportunity for the public to rally against them, to reiterate its refusal to allow this. This is where the old ACLU “speech for Nazis” argument came from.

If they are somewhat bigger in number, they become a part of public discourse – thus legitimating questions like “well, are people?” To legitimate these questions is to require every such group to continuously prove their humanity, and their right to even argue back.

This is not a real counterspeech remedy. Normalizing the question of “Is human?” places the burden on them to continuously prove it. This why Nazi speech is a public danger when they are in anything but the smallest numbers.

What are their numbers? cf this Reuters/Ipsos poll from a few weeks ago: http://www.centerforpolitics.org/crystalball/wp-content/uploads/2017/09/2017-Reuters-UVA-Ipsos-Race-Poll-9-11-2017.pdf

14% of people (N=5,360) were neutral to positive on Nazis when referred to by that name. Support for their ideas was much higher.

Punching Nazis is a minor control mechanism: it silences the danger without amplifying its speech. But it doesn’t solve anything. Historically, there has been exactly one solution for Nazis. It did not come cheap.

Never forget what Nazism is – and that when it appears, it needs to be stopped immediately and vigorously. “Nazi” is not a slur, and it should not be used for anyone who does not advocate those ideas. But it should be used for those who do.

And for those: no peace, no sympathy, no quarter, and no mercy.

10 Likes
Russia-linked Facebook ads and Twitter accounts from 2016 campaign released by House Intel Committee
Flynn flipped like a pancake, is singing like a canary, and his plea deal is 'very, very, very bad' for Trump
next page →