A motion detecting light for your mailbox

I could never be sure that the light was off when I closed the door.

My better half and I each receive business mail at a “mailboxes-r-us” place a couple of miles from the house. (Nothing sketchy - but neither of us sees any good reason to broadcast our home address.) I swing by and check the boxes nearly every day, but there are plenty of days when neither of us has any mail. I’ve often told myself that, One Of These Days Real Soon Now, I’ll build a little IoT notifier thingy… I clicked through to this article hoping that somebody might have saved me the trouble.

(Yes, I could call ahead to ask the proprietors of our PMB whether we got any mail - but no, that’s not a viable long-term strategy.)

The ones I bought were unreliable, they seldom worked when installed and wouldn’t stay snapped together. My experience was negative.

Sounds like a great way to get your neighbor to do tricks. Just wander by and pop their mailbox open and closed a few times a day.

Hey, I can THINK about doing it!

If DHL can send me an email when my package is going to be delivered, Australia Post should be able to notify me when a letter has been dropped in my post office box. Its such a trivial idea that its hardly worth considering the design.

I could never be sure that the light was off when I closed the door.

So, did you install a CCTV in your fridge to put your mind at ease?

Cool idea! But it would be a waste of money in rural areas where mailboxes are occasionally bashed in at night. It might give the basher a thrill, though, if the box lit up when it was hit.

USPS scans the mail. I haven’t signed up for the Informed Delivery service, though. I wasn’t even tempted until our mail carrier retired last year. Now the entire neighborhood’s delivery frequency is inconsistent - days with nothing, followed by one day with a ton of items.

Given how many letters now wind up in my mailbox by mistake, I’d rather see a wrong name/wrong address detector that rejects items before the new mail carriers shove them in (like the dollar bill scanner on a snack machine). I wouldn’t be averse to the “mild electric shock” feature, in cases where the street name and number are not even close. There’s got to be some incentive to get them to read and count correctly, right?

If it senses light but no motion, it realizes it left itself on and returns to standby mode.

I put one in my mailbox, which is a shared secure multi-box that’s wide and deep but short. And it’s been perfect. It did fall off its magnetic mount once but it seemed like it could be oriented in a way that made it more secure as that hasn’t happened again.

It’s great if you live in the sticks and check your mail at night. I got mine a year ago (presumably when Mark mentioned it) and I’m still on my first set of batteries.

I’ve often thought of rigging a spare wireless doorbell button to the mailbox somehow. I would know we’ve gotten mail if it rings around the right time in the afternoon. I would also know if thieves are wandering the streets if it goes off during the night.

Combine it with an old cell phone so it takes a picture of anyone who opens the box and uploads it to the cloud. A solar panel could maybe power the phone. (Pet peeve of mine: why use AAAs when AAs are cheaper and have three times the capacity? Space isn’t the issue.)

Yeah I’m inn the sticks too and the night time concern is exactly it…maybe there are different models of the thing and I got a bad batch. Would have been handy if it had worked right. I’m glad yours worked for you, though.

The designers have addressed half of the usage modes for a mailbox, and the less important one at that.

In addition to turning on a light, trigger a wifi signal that can be picked up inside the house. Sure, there are technical problems getting a radio pulse out of the metal box to wherever the wifi hub is, it may mean getting a whole 'nother mailbox with the functionality built in. (and the certification nightmare that entails)

But a mailbox that can tell you when the mailbox has new mail for you, ready to be retrieved, that would be a gadget worth getting!

We have no mailbox. Canada Post cut home delivery and went to “Super Mailboxes” for the neighborhood.

I wonder if I could fit the light in without them noticing?

But a mailbox that can tell you when the mailbox has new mail for you, ready to be retrieved, that would be a gadget worth getting! 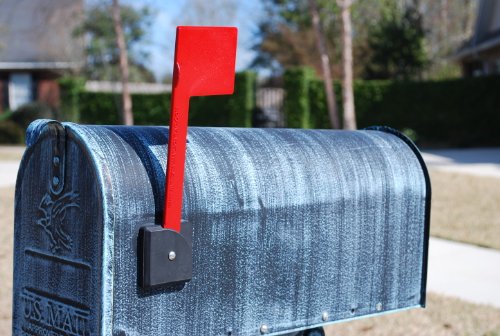 Check your link, it doesn’t work for me.

Its probably just a .WAV of the AOL notification.