A Princess of Pluto

Is it just me, or do the Frazetta covers tend to make books look a lot more exciting than it actually is?

Is it just me, or do the Frazetta covers tend to make books look a lot more exciting than it actually is?

Isn’t that the point?

“Don’t judge a book by it’s cover, but instead, by the content of its character.”

“Don’t judge a book by it’s cover, but instead, by the content of its character.” - Benjamin Franklin

Oh, sure he’d say something like that… after he got you to buy the book. 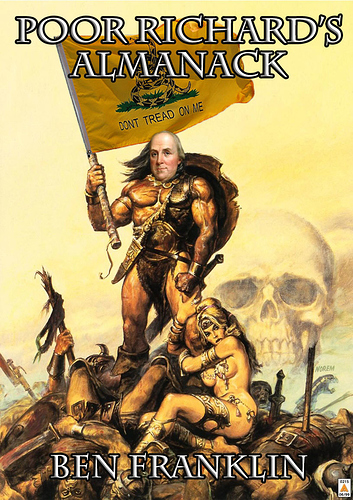 I’d say you can often tell plenty from the cover of any book - it’s far from a perfect or bias-free information source, but there’s certainly stuff that can be gleaned from it. Of course book covers should sell, but part of that tends to be communicating what kind of book it is.

I don’t disagree. But I’m still pleased that Amazon & Co made it much easier to select books based on more than just cover, blurb and a skimmed paragraph in the bookshop.

For sure - I generally try to go by something more reliable. But if one does see the cover, it would actually be a bit off not to judge the book by it - just not only by the cover, if there is anything else to go by.

I had a variation on this problem with beer, once upon a time. As my personal inclination was one of experimentation, I tended towards just picking what looked interesting, with a bias towards more reliable breweries, but otherwise going very much by beer type and label. It worked out better than it should have, really - even beers trying to fake an interesting style and label tend to somehow stand out.

Books are quite a different investment, of course.

I actually buy about a third of my wine based on the label, with very mixed results. But I still do it because it’s fun and I simply like some wine label designs so much

He most certainly did - had I not bought it online, I might not have bought it at all, with that cover. It’s funny how I think of myself as not prude at all, yet I really wouldn’t want to be seen with that book in my hand with the cover showing…

As for wine, I never really bought enough to have a strategy for it, but certainly I’d avoid any label that looked too silly. A good label for me would look old-timey and conservative, either almost monochrome, or with a color scheme that speaks of a century past.

It sounds easy to manipulate, but while I couldn’t speak for wine, for beer it somehow appears more difficult to game than one would think. Perhaps few on the market truly try to game it? Perhaps repeat buyers are more important?

I forgot which edition I bought (my position is luxurious: Amazon Germany has no issues selling me US and UK books :)), but in this case my decision was anyway based on the author - I’m not sure if I had bought it based on the cover and blurb.

But back to alcohol; silly labels are the (my) whole point, this one was even twofold silly: A flying squirrel and grown at the north pole (ok, Canada. but still.). Quite tasty, btw. When buying wine not for the giggles I either choose vineyards (or even better: terroirs) I know and like or opt for middle priced French redwines with Bauhaus-like minimalistic black-and-white labels - works more often than not.

If it has a castle on the front, and says ‘estate bottled’ in any language, go for it

My friend has this tattooed on his back.

An old Italian once told me, “If it’s got a cork in it, it’s good enough.”

What if it has a sword and boobs?

I’m happy you’ve found a method that works for you, but flying squirrels would almost be up there with bottles that have prints of fish on the inside to look like aquariums. Far too risky for me. Beer labels, on the other hand… let’s just say I had plenty of luck with a bunch of beers with labels by Ralph Steadman (while also some less than stellar beers…)

I’d being told Pluto is a little bit colder than Mars.

She will need an additional chainmail bikini.

Wheen googling Steadman’s beer labels I found Ralph Steadman and the beer that outraged the US. I’m outraged I never heard this before!
Maybe I should start label-based beer shopping, especially as craft beers are slowly emerging here, too.