A sailing team made up of Australian asylum seekers

A group of Asylum seekers have been sailing on Sydney Harbour today as they start their preperation for one of the world's most difficult yacht races, the Sydney to Hobart. The organiser of the Young and Free sailing project Greg Lake hopes the...

This is an interview with a friend of mine who I worked with just over a decade ago. Since then he joined the Australian Department of Immigration and was director of offshore processing in a detention centre in Christmas Island in 2010 when one of the boats carrying refugees from Iraq and Iran capsized and 48 people died:

In 2013 he left the DoI after becoming disillusioned with the increasingly draconian immigration policy and the dehumanisation of detainees, and since then has been working with refugees and discussing issues related to immigration and communication between faith groups. This latest initiative aims to provide a sailing program for youth at-risk and for refugees and new migrants, while building a team that will compete in the Sydney to Hobart race this December. The team will be made up of 8-10 asylum seekers and four experienced sailors. (Greg is the guy on the far left of the photo). 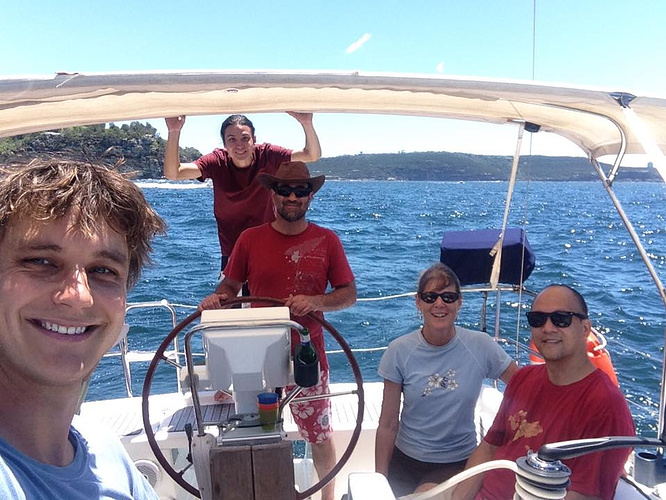 He wrote an article a year ago which highlights some of the self-justification he was able to achieve as a Christian in that situation. It’s written for a Christian readership, but it’s still an interesting perspective in a number of ways.

Harrowing stuff. I was aware that many governments had a policy of jailing asylum seekers in terrible conditions as some kind of dissuasion technique and have always thought it barbaric, fuelled by the uncaring nimbyism of racism in the home country.

There has been much said on boingboing about the (potential of the) environment of one’s job contributing to a kind of ethical compartmentalisation but to hear the specifics from such an obvious humanitarian, and what he was driven to by the requirements of his job, was particularly difficult to read.
I thought this passage in particular, from his christian blog, highlighted the synthesis of evil that impersonal policy can drive one to:

The most challenging part of that position was when I was asked to select some people from family groups to be transferred to Manus Island.

My instructions (from the Minister for Immigration’s office) were to find families with children as young as possible (because we had to send a message to people smugglers that children, even young children, weren’t exempt). We couldn’t transfer children under seven, as they couldn’t be inoculated against Japanese Encephalitis or Malaria, so I had to choose children who looked young, to send a message to people smugglers.

That said, the genius of the program, to combat the asylum seekers terrible experiences of the sea by conquering it head on, impressed me greatly. I’m not religious but the strength he draws from his spiritual framework truly struck a chord with me.
I don’t want to speak out of turn but please extend my thanks to him when you next speak.