A story about a weird "magic switch" at MIT

Well, a certain user became one of those trusted people, and was allowed to work in the secure room. Well, while working there on a Saturday, curiosity got the better of him and he pushed the red button.

I was an operator in a Data Centre many moons ago and one of my co-workers was that Trusted Person. Except he did it at 1am mid week during overnight processing and then immediately ran away when he realised what he done. Don’t recall what happened to that guy…

I am reminded that the early Xerox copiers were so prone to catching fire that they came with a fire extinguisher labeled a “Scorch eliminator.”

(Apparently it’s supposed to be used if there’s a fire, and is recommended by NFPA 75)

Anyone remember “turbo” mode? I think this was early pentium era.

The ‘Turbo’ button does the opposite of what you’d expect, it slows down the CPU so that older software (especially games) didn’t run too fast.

On IBM PC compatible computers, the turbo button selects one of two run states: the default normal speed or a reduced "turbo" speed. It was relatively common on computers using the Intel 80286, Intel 80386 and Intel 80486 processors, from the mid 1980s to mid 1990s. The name is inspired by turbocharger, a device which increases an engine's power and efficiency. Contrary to what it suggests, the "turbo" button was generally intended to let a computer run slower than the speed for which it ha With ...

23 posts, and no one posted Ren and Stimpy…?

Out of cheese error redo from start.

Going back to the 8086 days, I had a PC-XT clone with a Turbo button that switched the CPU to 8 Mhz rather than the default 4.77 Mhz. So n that case it was a proper “Turbo” button.

This was before cases came with a Turbo switch, so I had a local machinist fab a small aluminum plate to mount a small toggle switch and a couple LEDs. Cost me almost C$100 at the time, but damn, the guys at the computer club were mighty impressed.

@nosaj’s EE wife is absolutely correct; grounding problems are nasty AF! I once chased a subtle problem for weeks on CNC machine my company built; in the end, an electrician did a less-than-good scraping paint off under a ground lug.

I’ve installed CNC machines worldwide; if at all possible, we always drove our own ground stake near our machine, especially in shops that didn’t already have CNC machines. Local electrical codes sometimes prevented this, often leading to problems. 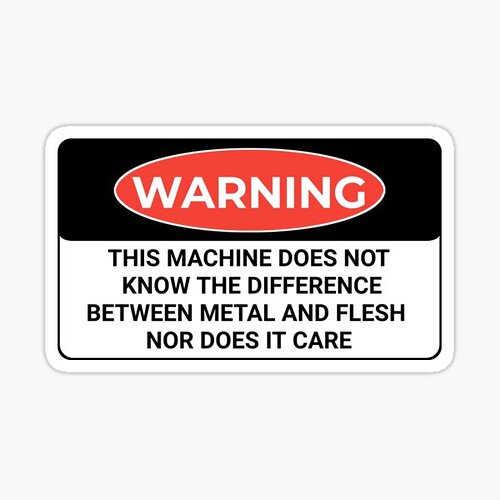 It took the lab two hours to restart operation but they absolutely knew the emergency button would work!

you’ve got wonder though: would it work a second time? what if pressing it broke something. ( or a third time. ( or a fourth time. (…) ) )

you’ve got wonder though: would it work a second time?

She’s moved on to other, greener pastures, but I suspect I know the answer she’d give if someone asked her that question. “Let’s find out!” I admire her dedication to the cause of science, although watching her I can see how the mad scientist trope may have originated. Hearing her talk about the interview from whatever TLA agency it was that was asking questions like “have you ever through about how you might smuggle biosamples out of this lab” is really interesting. (Yes, of course I have. It’s my job to think about how to do that and how we can prevent it!)