The 1947 origin story of the first computer bug is bogus

Originally published at: The 1947 origin story of the first computer bug is bogus | Boing Boing

This story is giving me the eyerolls in a big way. I Am Disappoint. Put me on the list!

Even if Thomas Edison (or someone he was stealing credit from) found a bug in the form of an actual bug in his equipment, that doesn’t really have any bearing on the Grace Hopper story. For one thing, I would hope it’s obvious to anyone paying attention that the quote:

“first actual case of a bug being found.”

is deliberately playing on the established use of “bug” = “flaw”. It’s clear from a moment’s reflection that this isn’t a coinage but a winking reference.

Whether this is literally the first engineering bug that was caused by an actual bug is also kind of irrelevant to the story. Whoever wrote the notebook entry wouldn’t have any reason to know that Edison had a similar experience. It was a joke.

Whether it was Grace Hopper herself who wrote the entry, or not, is materially interesting but also doesn’t really affect the factuality or historicity of the anecdote more broadly. The actual contemporary notebook exists from Hopper’s project with the entry and the dessicated moth taped to the page.

As for Edison’s quote:

"You were partly correct, I did find a ‘bug’ in my apparatus, but it was not in the telephone proper. It was of the genus ‘callbellum.’

It’s less clear, but given that the word “bug” is in quotes, I’m inclined to believe that he is making the same joke.

OED attests the “engineering error” meaning of “bug” as early as 1875, so.

So the likelihood is that Tesla came up with the joke?

He probably found a bug a couple years before Edison, except it was AC.

This is of course in the Jargon file, recently seen at A story about a weird "magic switch" at MIT | Boing Boing .

Actually, use of bug in the general sense of a disruptive event goes back to Shakespeare! (Henry VI, part III - Act V, Scene II: King Edward: “So, lie thou there. Die thou; and die our fear; For Warwick was a bug that fear’d us all.”)

I was actually thinking of the tale of the early computer programmer who realized he made a mistake in some code and pondered that a large fraction of the life to come would be concerned with looking for similar errors, but I can’t seem to find it. Does anyone recall what that was?

Maurice Wilkes, creator of the EDSAC, the first stored-program computer, wrote what might be the first programming textbook in 1951, with David Wheeler (inventor of the subroutine call!) and Stanley Gill. It warns: “Experience has shown that such mistakes are much more difficult to avoid than might be expected. It is, in fact, rare for a program to work correctly the first time it is tried, and often several attempts must be made before all errors are eliminated.”

In his memoir, Wilkes recalled the exact moment he realized the importance of debugging: “By June 1949, people had begun to realize that it was not so easy to get a program right as had at one time appeared. It was on one of my journeys between the EDSAC room and the punching equipment that the realization came over me with full force that a good part of the remainder of my life was going to be spent in finding errors in my own programs.”

“So, lie thou there. Die thou; and die our fear; For Warwick was a bug that fear’d us all.”

2. A self-important, pompous, or conceited person […] In later use probably often perceived as a use of [bug n.2]

(at least according to the ol’ OED, attested back to the 1400s for the first meaning).

So I’m guessing that’s how it’s being used here. Definitely a related use but I don’t think you could draw a precise linear connection from this usage to the “error” meaning:

5. Originally U.S.
a A defect or fault in a machine (esp. an electrical or electronic one), or in a process, etc.

(attested 1875 and probably a bit earlier in real life).

I think the usage of “bug” to mean something has gone wrong with a system probably goes way way back. We have the expression “a fly in the ointment” after all.

I’m no entomological etymologist, but it seems reasonable that many people in many places gradually started applying the word to machinery, then electromechanical systems, then electronic computers. There probably isn’t a “first” story per se.

It’s less clear, but given that the word “bug” is in quotes, I’m inclined to believe that he is making the same joke.

It would be a similar joke but not the same. ‘Callbellum’ is apparently not a type of insect but a Latin pun, -bellum meaning war or conflict, the device telephone was having a “call war”. I would guess that the person he was writing to thought that there was an actual insect in the phone and Edison was making a humorous explanation of why it wasn’t.

Oh yeah, this is clearer from the full quote. I had letter-jumbled and misread the Latin as some kind of Greek-Latin mashup that was like “pretty head” so I didn’t look too closely to see if it was a real nomen.

Having Googled a bit, the Edison anecdote seems well-reported, and better-described, elsewhere:

The “callbellum” bug that Edison was referring to was likely in the wires that connected the receiver and transmitter, says Marco Tomaschett, a Swann Galleries specialist. 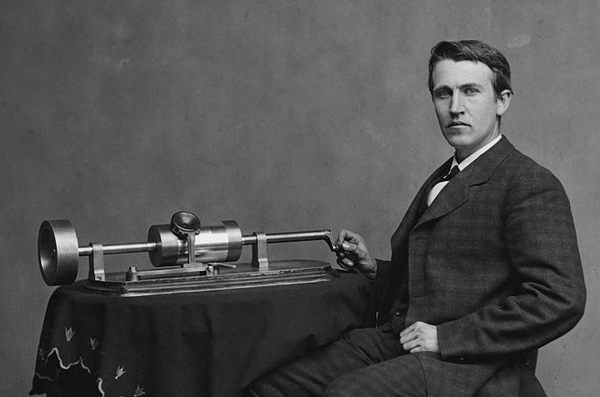 Thomas Edison Was an Early Adopter of the Word ‘Bug’

In an 1878 letter, he uses the term to refer to a technological glitch.

So I think you’re right that it was probably some kind of crosstalk issue. And if the OED is right in its attestation date, then the coinage “bug” might have been new enough in 1878 that Edison felt the need to clarify his use of the term.

So maybe the Hopper story could still be the first bug caused by an actual bug?

Ostensibly the most popular english etymology website https://www.etymonline.com
goes through the much older 16th “bugbear”/goblin connection. Then fetches up with a nod toward Thomas Edison for this specific (‘bug in the machine’) usage [shrug]

“insect, beetle,” 1620s (earliest reference is to bedbugs), of unknown origin, probably (but not certainly) from or influenced by Middle English bugge “something frightening, scarecrow” (late 14c.), a meaning obsolete since the “insect” sense arose except in bugbear (1570s) and bugaboo (q.v.).

The name of bug is given in a secondary sense to insects considered as an object of disgust and horror, and in modern English is appropriated to the noisome inhabitants of our beds, but in America is used as the general appellation of the beetle tribe … A similar application of the word signifying an object dread to creeping things is very common. [Hensleigh Wedgwood, “A Dictionary of English Etymology,” 1859]

Meaning “defect in a machine” (1889) may have been coined c. 1878 by Thomas Edison (perhaps with the notion of an insect getting into the works). 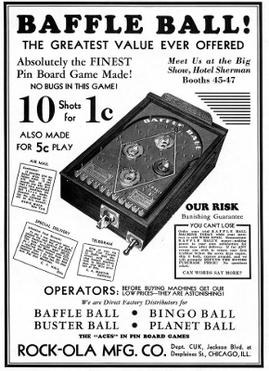 Baffle Ball, the first mechanical pinball game, advertised “no bugs in this game”, in 1931.

maybe a reference to jumping beans rather than errors?

‘Bug’ was a jargon used by engineers to designate mechanical failures. And this has been common since the 19th century.

I have a historical sad. 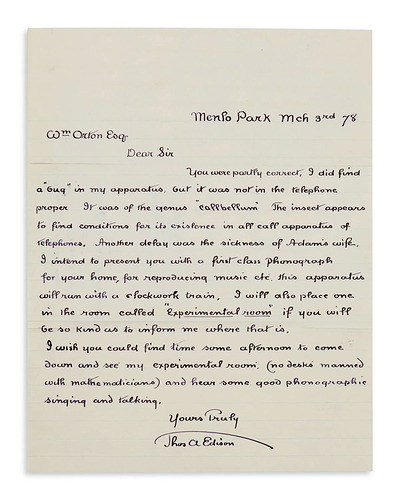 I envy people who can read letters from their past without specialist training.

Here’s a German letter from the same time period 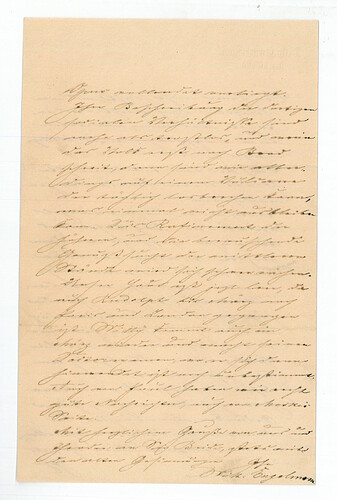 But words on paper aren’t special… I mean, words are the exact same across time and space, right? Not like there is a need to train people to learn how to read documents written by hand ever, right?