What a great “experiment” - teaching the younguns video game history and how to appreciate the classics. The only downside that I can see is that, having played a new generation of console every 6-12 months, this kid is going to have some pretty high expectations about the pace of progress!

Not only that, but it seems he’s now so good at hard platformers and the like that he’ll probably struggle to find decent challenges.

Unless that kid is growing up in a vacuum I highly doubt that (or Baio’s final suggestion which is near identical) would come about. The kid is 10. He’d have to be home schooled, have no friends, and have a few other heavy restrictions on his interaction with children his age to have no context of what’s cool now with kids or what else is out there. From my experience with kids in that age block it’s chiefly things like Minecraft, Nintendo and Skylanders, or casual/cell phone games. But the kid gets a few years older and its going to be more broadly about mainstream and AAA titles. Its kind of naive to think the boy isn’t rocking Minecraft at school or friend’s houses. My 8 year old cousin has that installed on every family member’s cell phone and tablet, you find her hiding in a corner poking at it whenever she’s bored.

Probably better to think of this as deliberately teaching the kid the common language, structure and rhythms of games in much the same way we introduce kids to other media. In increasingly complex steps. Which is probably a good thing. I was talking to a friend of a friend about the subject the other day. He’s a bit younger than me (3 or 4 years) but he went on an old man tirade about “kids these days” and how they didn’t seem to get the sort of game that just drops you in and expects you to find the plot and major bits of the game through exploration. He wasn’t exactly wrong (though he broadly wrong), he was specifically talking about young men in their late teens and early 20’s who had grown up playing things like Call of Duty that are very much on rails. They never seem to have picked up the “open world/rpg = explore” rule that was drilled into my head from early days. So even things like Skyrim which pretty well gives you a clear dot on a map to run at sort of confused them (no real awareness of or interest in side quests and exploration for funsies), and a lot of indy games were completely lost on them. But you bracket that down to a younger age group. Like my cousins who are aged 8-13 (and we were discussing/hanging out with at the time). I think they’re getting it anyway, and probably something a bit different. Minecraft is the big behemoth with this age group. And it literally just drops you in a space with no context, you explore and poke things with a stick. There isn’t much of a “game” per se, you have to find/build that emergently. A lot of the other stuff those kids are playing is of the indy or mobile variety. Gameplay, and often art style/graphics are directly cribbed from retro games. So they’re sort of getting a good primer in how that works by accident.

But actually instructing the kid in the history and mechanics of games in this fashion is probably going to give him a much broader understanding and appreciation of a much broader group of game types. Like the PC Adventure games. Not a lot of the popular stuff in his son’s age group has any relation to those, and there aren’t a ton of people still creating stuff like that. But the tropes and mechanics of that genre are very much at the center of a lot of modern Western RPGs, to say nothing of what Telltale is doing. Shit some of that stuff shows up in places like Assassins Creed.

A lot of younger kids really just want to spend time with their parents. They will play the games as a bonding experience. It’s not about what games you expose them to, but about the fact that you’re spending time with them in the first place. We recently introduced my 7 year old to both the PS2 and the N64 because he found emulators for old wrestling games online doing his own searches for wrestling video games.

Hmmm… this experiment started in 2008, which I imagine was easier to pull off since it was done prior to tablets existing and smartphones just being on the market. I imagine it would be harder to pull off now when kids are exposed to people playing mobile games and most are then curious about them.

There is always Super Meat Boy.

I had this exact same idea, and a similar one involving music instead of video games, but I’ll likely never have children, so it’s exciting to see someone else doing it. I’m a little disappointed in the reporting, though… pretty much all we hear is that the kid is really good at video games and doesn’t hate newer games with older-style graphics. I was hoping for more detail, like the reactions to various classics and to the shift to a new console, or when trying a new genre of game. Then again, considering the very young ages involved, maybe I’m expecting more than the kid would be able to communicate.

I don’t know, while games are not made Nintendo hard these days ( http://tvtropes.org/pmwiki/pmwiki.php/Main/NintendoHard ), I tried playing Donkey kong country for the Wii with my son, and I just gave up. But maybe I’m just too old. 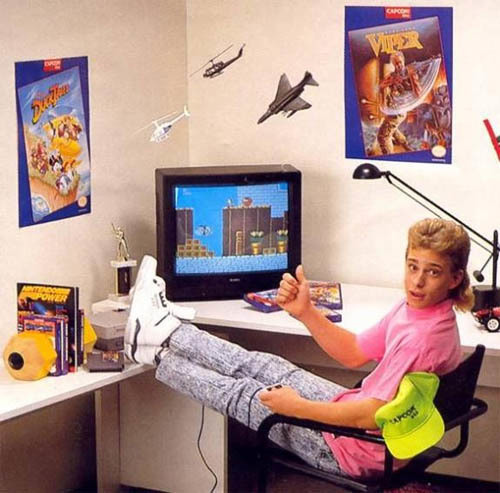 I have always intended to do this with my children, one day when I have some.

(Actually, I’ve been known to want to do this with girlfriends.)

I think this is a great idea. Some truly great games were great in part because they had new/better graphics or a new/better mechanic than anything before it. When you experience it more within the context of the times it I think enhances it.

I loaded up an emulator and we started working our way through the NES canon.

To me unless you play the early era of games on a CRT with the original console equipment, its a different experience. Besides that this is kind of an interesting idea.

Also the reference to the Steve Martin routine at the beginning really rang was interesting because I’ve never been able to forget that routine.

I think emulators are fine, but for the full experience they need to use either the original controller or one very close. I recall at Vintage Stock they are making new NES controllers which I think were for USB ports… I think?

I’ve played some old games on the keyboard and it just isn’t the same. I used to do a lot of MAME games and pined after a real joystick and big buttons.

Controller is one thing (ergonomics, hand fatigue, etc.) but also there is a big difference between a good old fashioned NTSC CRT and a fancy high rez screen where the emulator does de-interlacing, etc. Something about the difference in timing and eye strain with a CRT vs an LCD makes the experience a whole lot different. A third factor might be how emulators can auto save anywhere in a game whereas in the cartridge days that was not the case.