In one sense, maybe Chevy Chase spoke a little too soon. 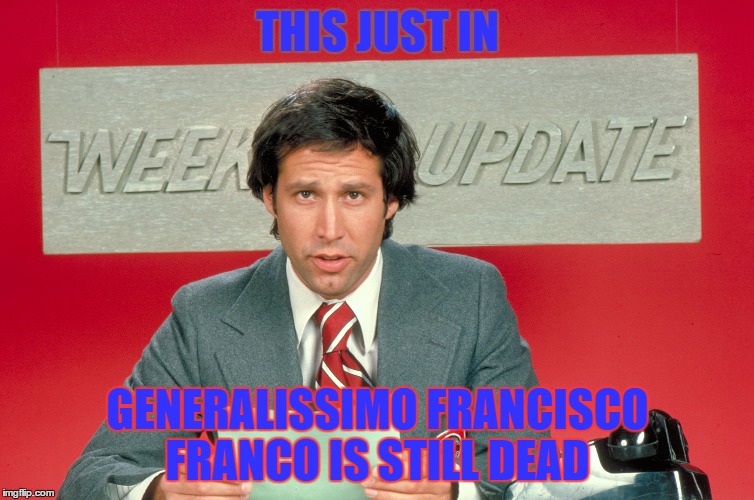 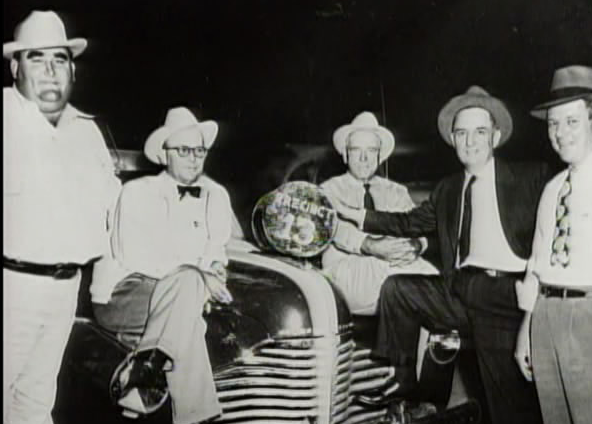 This is like the Streisand Effect, with the addition of guns.

I am SO torn about this. My heart is with Catalunya - the first Orwell I ever read was a copy of “Homenaje a Catalonia” that I found as a kid, and it stuck; also, the tactics that the central government is using are awfully reminiscent of the Civil War - but my head says that both Spain as a whole, and Catalunya as a separate country, would be significantly weakened by separation. And I can’t help thinking that Putin - champion of separatists everywhere except Russia - must be watching this with glee*.

It seems naive to hope that Madrid will show some maturity or common sense at this late date, but call me a foolish dreamer.

*Edit: I doubt that Putin gives a rat’s ass about Spain qua Spain, but anything that weakens the EU (and Catalunya would NOT automatically be part of the EU) is a win in his book.

And now the tractors have rolled in.

This is why Spain (among others) opposed to the Scottish referendum in the UK.

I happen to think that the while the EU is against succession in the immediate term, Brussels would much prefer a whole bunch of smaller states in Europe as they are forever moored to the EU project. France could, theoretically, leave the EU. Belgium cannot. Ireland probably cannot. Basque or Catalonia probably are wedded to the EU ultimately.

A catalan guy speaking here. Nice to read your words, but I’m for independence

I understand your posture though. In theory seems more logical to keep the union, but experience and history has shown that it just doesn’t work (we could go as far as the XVIII century). What’s happening right now is an example. There are great countries smaller than Catalonia (in terms of population) that work pretty good (Finland, Denmark, Norway…) I hope we can both (Spain and Catalonia) help rebuild EU, but as separate countries. Regarding the fact that Catalonia would not automatically be part of the EU, yes, but that’s up to the EU to make the re-entry easy/quick or not. 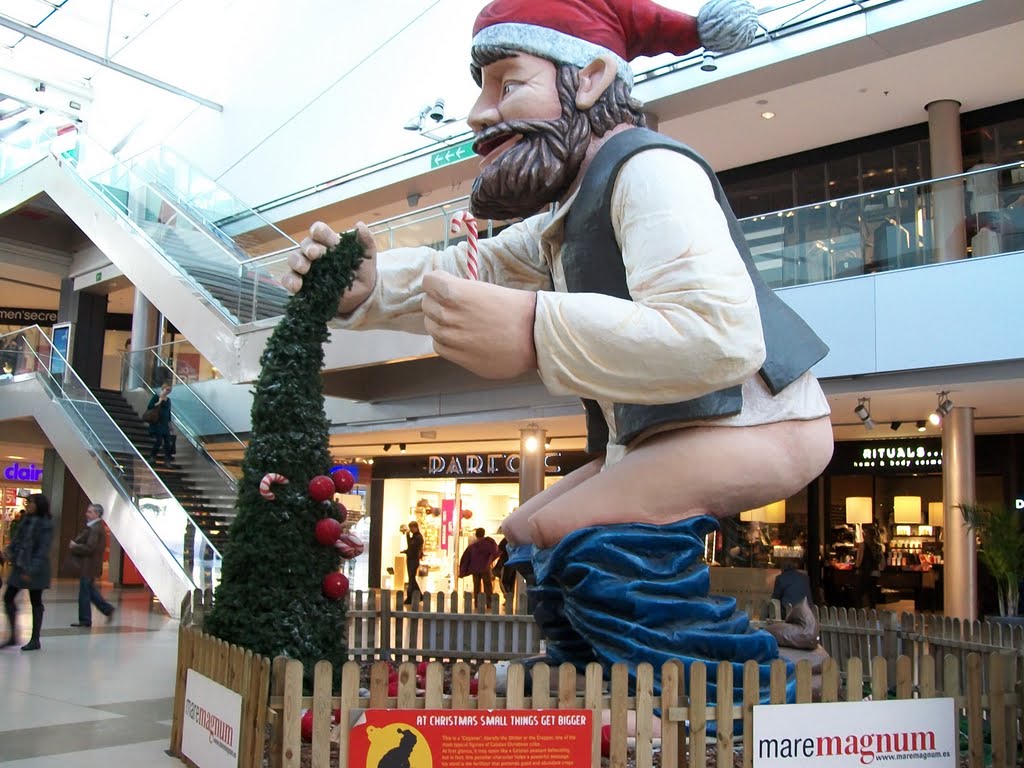 For your argument to work you need to define this concept of “weaker”. How specifically would this weakness affect Spanish and Catalan citizens on a daily basis? In what way would they suffer?

For your argument to work you need to define this concept of “weaker”. How specifically would this weakness affect Spanish and Catalan citizens on a daily basis? In what way would they suffer?

First of all, I would like to push back a little bit on the word “argument” - as I said (perhaps not clearly enough), my heart is on the side of the independence movement.

However, the concept of “weaker” seems pretty straightforward to me. Spain would lose its richest region, a large portion of its manufacturing capability, and the largest portion of its tax base. Catalunya would lose access to most of its agricultural produce, meat, and fisheries, and the largest market for its industrial output. (I’m assuming, of course, that in the immediate aftermath of independence both sides would enact high tariffs on each other. Maybe I’m wrong - but I really, really doubt it.) Of course both sides can find alternative markets for their products, and alternative sources for goods - but at a price. I’m not even going to mention military and security considerations, since Europe is a historically peaceful and stable region.

As for how individual citizens would suffer - I predict rather severe economic disruption in the first few years after independence, with prices rising and incomes falling. It should all sort itself out in the long run, but as a wise man once said we’re all dead in the long run.

All of that being said, I still want Catalan independence (if the majority of Catalans want it.) I just think everyone should have their eyes open before they jump.

So your argument seems to be that negative sentiments following the split could be acted out in terms of punitive trade tariffs. If that were to happen, then yes, their economies would suffer. But then again, as an EU member Spain can’t decide it’s trade policy unilaterally so it’s a scenario that is very, very unlikely to happen.

shrug This is what happens when you cram “austerity”, with all of its stupidity and failure, down the throats of your citizens. The only thing “austerity” accomplishes is the steady destruction of national economies and civil societies.

Perhaps the austerity-pushers in Europe will pause for a second thought, if they’re slapped down in this manner. Economic fact certainly doesn’t work; no, drastically shrinking your economy on purpose hasn’t worked out once, to date. It’s like the “dribble-down”, supply-side economic beast; neither will seemingly ever die, no matter how many victims they reap along the way.

So your argument seems to be that negative sentiments following the split could be acted out in terms of punitive trade tariffs. If that were to happen, then yes, their economies would suffer. But then again, as an EU member Spain can’t decide it’s trade policy unilaterally so it’s a scenario that is very, very unlikely to happen.

Again with the “argument”. Your “argument” seems to be that nothing bad will happen and that all will be sweetness and light.

OK, so Spain won’t unilaterally slap tariffs on the newly independent Catalunya - but you’re saying the EU won’t, either? Remember, Catalunya won’t automatically be a member - so their trade position will instantly go from “EU member” to “non-member”. Furthermore, the public position of Brussels is against independence - so I very much doubt that Brussels’ response would be to immediately grant MFN status. In fact, when I wrote the comment you’re replying to, I hadn’t considered this - I was thinking “OK, so they can’t trade with Spain so easily; they can pivot to the north and trade with the rest of the EU.” But you’ve forced me to reconsider, and I now see it’s likely to be worse than I’d thought.

At the very least, thousands of small businesses that currently trade mostly/exclusively within Spain would have to re-negotiate supply chains, likely at significantly higher costs. It can be done - and it will be done - but most likely quite a number of them will go out of business along the way.

The longer we discuss this, the more I’m moving from “Good luck, but keep your eyes open” to “Holy crap, you’re about to step on a rake!” I hope I’m wrong about that.

All that being said…

(my apologies if I’ve mangled that - and yes, I know La Pasionaria was Basque, not Catalan.)

You have a point, but I think you’re missing an important point, yourself:

The people in the area are already aware of the uncertainties involved, both economic and more generally social. And…? They’re asking the question, anyway.

If you make your country inhospitable enough to a large enough portion of your citizens, they WILL leave, one way or another. The only way to prevent this, in fact, is fascist/autocratic BS like Spain is dabbling in right now (as in the past). Remember the refugees sneaking over the Berlin Wall? Howzabout Cubans, floating over to Florida?

Gawrsh, I guess “austerity”, which merely means “enriching banks at the expense of entire economies” as it’s used in the EU and US today, has consequences? Perhaps the Spanish government had best rethink its “mandate”, ju-u-ust maybe?

Spain is lucky, actually, in that this would have almost certainly been a full civil war in the past; it’s not like they don’t have local precedent for exactly that! Which the Catalan area probably would win, point of fact. They are analogous to the American North during the Civil War, and have a disproportionate share of the heavy industry and economic power.

While the actions of the Spanish government appear heavy-handed, and while I support the right of everyone to demand independence, it doesn’t seem as if the issue is as cut-and-try as the government being evil fascist Franco thugs.

The election being run does not appear to be being legitimately run, and yet it will claim the title of being “binding.” There don’t seem to be clear, defendable rules over who is being allowed to vote. There doesn’t seem to be redress if, say, Barcelona strongly wants to remain and the other cities want to leave. And there aren’t even impartial ballot counters – it seems as if the Independence movement will get to count the ballots.

If I’m wrong on these things, let me know. I’m certainly fuzzy on the details. I admit that my knowledge of the facts is limited to what I’ve gathered from the news over the past few weeks.

But democratic independence generally needs to be achieved with mutually-agreed upon terms. Britain was ready to accept the results of the Scottish vote. The last time certain states tried to secede from the US, a civil war was fought to prevent them from doing so.

EDIT: To be clear, nothing in this post should be seen as defending the brutality of the state and the police in this instance, which has gotten significantly worse in the few days since I referred to them as “heavy handed,” and which, I certainly admit, people smarter than me had seen coming before I posted this.

I hope they weren’t originally planning to use this secret backup stash of ballot boxes for stuffing purposes.

And I can’t help thinking that Putin - champion of separatists everywhere except Russia - must be watching this with glee*.

Well if Putin likes it, then it cant be a good thing!

Thank god Putin hasnt come out against pedophilia. I know I am a veritable fan of all things Russian in comparison to some, but I really dont think Catalan self-government is gonna resurrect the Warsaw Pact or bring about the end of West European freedom. Same goes for Scotland. Plus I’m not sure what the functional difference of Calalunya not being in Spain would be. Is it going to be like Belgium not being a possession of the King of Spain anymore? Is your concern economic because of the damage to Spains tax base, or are you really concerned NATO doesnt have enough substantial members?

If Putin is bad for anything then its Mother Russia - with Facebook being a very distant second.

If I’m wrong on these things, let me know. I’m certainly fuzzy on the details. I admit that my knowledge of the facts is limited to what I’ve gathered from the news over the past few weeks.

I dont think you are wrong about any of those points, but to be fair to the regional government, they are all under threat of arrest and the police have been hampering to organisation of the vote. The vote itself has been declared illegal and the technical concerns appear to have been secondary to preventing the vote itself.