An analogy is a raft you use to cross a river

But what if that raft is actually an analogy for a road - the road to true happiness? And the river itself is the um… doubts… no, it’s the obstacles… awww I suck at this.

I would argue that roman numerals* are pretty good for adding and subtracting whole numbers less than 10,0000. It’s doing more complicated operations on larger or non-whole number that they are poor at. We are not facile with them because we didn’t learn numbers using them. We have to “translate” them into arabic numerals.

*The Romans actual didn’t use the “subtractive numbers” like IX, instead writing VIIII.

Also, note that a number like MMMxxxxxxx is clearly about 3000. You can tell that just by scanning your eye from left to right until you see something big. You know you’re looking for something big, because there are a lot of characters. If you have a case like MMcMxxxxx, then you still know that it’s on the order of 3000, because the intervening C represents an error contribution of only -100.

A further benefit of the more modern subtractive notation for the numerals is that you have to write (or engrave) and later read the minimum number of characters. Note that no unique character will ever appear more than 3 times, so you don’t have to count much.

Strings of roman numerals are longer and take more characters to converge to some level of significance, but you also are a lot safer scanning or truncating them, and you can convey order of magnitude easily even at a distance or with a glance. Positional notation on the other hand makes is really easy to screw up by an order of magnitude. The Roman numerals are a less-good tool for jobs requiring precision, but still effective.

What the hell, are Roman-numeral-truthers a thing now or something? Hindu-Arabic numerals are a fucking amazing technology. They’re one of the greatest democratizing tools ever invented, allowing a far greater level numeracy than any previous system. Just try multiplying IX S••• with CM Ɔ and get back to me if you doubt it. And even if you’re disturbingly okay with the plebes not having time to master math, just try using logarithms without a radix point.

Truthers? Let’s put it this way: hindu-arabic numerals are great. They make a lot of things easier. The Romans still somehow got aquaducts, plumbing, and a complex trade industry.

If something that worked okay – not as well as modern technology, but well enough that it was clearly ubiquitous for millions of people for roughly 2000 years – and yet it seems “broken”, then perhaps you’re just not thinking about it right. At the very least, you’re not asking yourself what those people were doing and why they never encountered said brokenness. I don’t blame the Better Explained guys for being glib about it – because when you do a video about how to understand confusing things better, you have to open with something most people find confusing, even if it’s an unrelated, throw-away comment about Roman numerals or Egyptian fractions – but it was still glib.

And, as I pointed out, positional notation is very, very powerful. So powerful, in fact, that when you screw up, the most likely failure is a factor of ten error.

When I was teaching binary I always opened with time as a fux0ringly confusing system which we all nevertheless manage to master.

And yet … It kinda works.

This was really cool. I miss math, I kind of regret not going further into it. I took this abstract algebra class and it was super hardcore, and I was young and had to work a job and stuff, so I went to philosophy instead.

You cannot step in the same analogy twice.

The Romans actual didn’t use the “subtractive numbers” like IX, instead writing VIIII.

They didn’t? Well crap - I’ve been living a lie. A couple of years ago I released this: http://www.teapot7.com/roman-clock-app/ - and I used subtractive numbers.

A couple of years ago I released this: http://www.teapot7.com/roman-clock-app/ - and I used subtractive numbers.

For clocks, it’s more complicated than that. The standard for old-style Roman numeral clock faces was to use IIII, not IV, for 4, but to use IX for 9. The numbers were oriented as if viewed from the center of the clock, so the bottom numbers were upside down.

In this fairly typical example, the minute markings around the circumference use Arabic numerals. 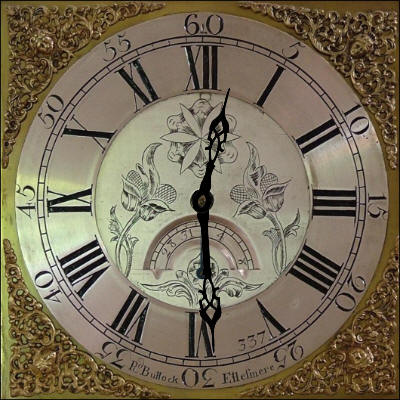 Some years ago I accidentally stumbled onto Pythagoras triples while playing with Lego. And suddenly my entire appreciation of numbers popped into a new kind of clarity.

I think as my teachers were trying to drill number theory into me, I was always a little confused by the different analogies. In some word problems, the numbers represented quantity, and in others, amount. The difference between gallons of gas, vs gallons of milk always had me a little unsure whether we were talking about the spaces between the tick marks on the number line, or the tick marks themselves. Significant figures in chemistry helped me with the spaces between, but it wasn’t until Pythagorian triples came along (never in school!) that the tick marks finally made sense.

I never hated math. I love math. I always hated math class in school, the teachers always convinced me it was going to be hard and unpleasant.

I remember as a pre-teen making mix tapes, trying to add up the song times to fill a 90 minute tape. I hated convertti g from base 60 to base 10, but took a perverse pride that I could do it at all.

That makes sense I guess - if the IV is going to be viewed almost upside down it might not be intertreted correcly. My digits are all upright, digital clock style, so I’m off the hook I guess.

“An analogy is a raft you use to cross a river” doesn’t really work for me as an analogy for analogies.

“An analogy is a raft you use to cross a river” doesn’t really work for me as an analogy for analogies.