This. This. A thousand times this.

If you don’t like the politicians we have, then get involved at the community level!

Perhaps this is more a consequence with the extremely narrow/strict concept of what is acceptable for office clothing in men?

Either scrap the extremely dated idea that, to conduct business, you have to wear a suit which dates to the Victorian and Edwardian periods, or equalise the rules to require women wear them too?

I’m lucky to work for a company with just a casual dress code and I tend to be the only one who wears shorts and find the aircon is definitely too cold, but acceptable when wearing jeans.

Mens clothing tends to be drab, samey affairs in general… could do with a bit more variety!

It is all well and good that those who aren’t “insiders” want to run for public office. The problem is, none of them want to run for a lower office and work their way up. They all want the brass ring.
Spend the time in a local position to learn how to govern, then run for governor.
This celebrity bullshit has to stop. We need experienced, qualified individuals.

This. This. A thousand times this.

While I agree with this…

If you don’t like the politicians we have, then get involved at the community level! 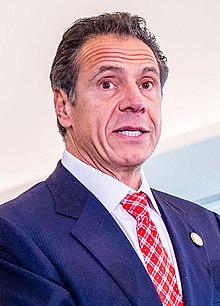 Andrew Mark Cuomo (/ˈkwoʊmoʊ/ KWOH-moh; Italian: [ˈkwɔːmo]; born December 6, 1957) is an American lawyer and politician who served as the 56th governor of New York from 2011 to 2021. A member of the Democratic Party, he was elected to the same position that his father, Mario Cuomo, held for three terms (52nd governor). In 2021, Cuomo resigned from office amidst numerous allegations of sexual misconduct. From Utah governor Gary Herbert's retirement on January 4, 2021 until he resigned he Born...

Son of NY governor, daddy’s campaign manager, appointed to the NYC Homeless Commission, appointed as Assistant Secretary in the Department of Housing and Urban Development, then Secretary.

The first thing he ever seems to have run for is, surprise, surprise, NY Governor back in 2002.

The reality of politics is if you let yourself get classed as a ‘local’ politician, you have much less chance of getting to the higher positions.

It shouldn’t be that way but it is…

Maybe they could get around interruptions, and arguments over the venue’s temperature, by putting the candidates in those sound-proofed booths you get on quiz-shows.

So much this. I hate ties and suit coats. I’m lucky to work IT at night where no one cares what I wear.

Still - most people take off the suit coat while sitting at the desk.

I agree - there is nothing wrong with Nixon stepping in and running for this. She’s exhibited a deep grasp of the issues - unlike one certain celebrity president. If it was not for the fecklessness of the DNC to stand up for their constituency their anointed insiders would not be so vulnerable.

Though not elected positions, he has been working within state government for quite some time. And I don’t begrudge him working on a campaign just because it was his father. I keep waiting and hoping that Nixon brings something substantive to the table, but I haven’t heard anything other than parroted talking points. At this point I’d rather have competence and a real understanding of NY state as a whole. It is not an easy place to govern and encompasses more than just the MTA and legal marijuana.

If she’d requested venues be kept at 76 F rather than 24 C, would it have gathered as much attention, I wonder? That is, is it “she’s a snowflakey snowflake making snowflakey demands, AND she’s a dirty communist who uses SI UNITS (dun dun dun!)”

Sure, I don’t begrudge him a thing.

I was just pointing out that he’s not exactly a paragon of community-based, bottom-up politics as was being advocated for.

He may be a great candidate, Nixon may be terrible - that’s New Yorkers’ decision to make but let’s not try and kid ourselves that someone with a degree of fame and a desire to enter politics who decides to run for a top job rather than standing for Ward 23 deputy assistant dogcatcher is taking that different a tack than the usual successful politician’s career path.

Both are equally capable of being terrible candidates

Agreed. My calculus on politicians is that every single person who got elected to a position is ambitious of power and therefore only to be trusted within that context. The higher the station, the more the power, the less trustworthy. I guess I see a complete lack of any public service and ambition of higher office doubly damning. I don’t care how much she sounds like Bernie. He’s got a record going back decades. She’s… an actor who talks about stuff.

The higher the station, the more the power, the less trustworthy.

Although from what I gather from Private Eye, et al. local politics can be even murkier than the big leagues. People get surprisingly invested in their little power positions.

Perhaps its the knowledge that losing your governorship still means you’ll get a nice board position somewhere.

It’s not the same, it’s still losing but it’s a nice let-down and you might be able to make a comeback whereas losing your seat on the parish council means you’ve got nowhere to go and nothing to do other than take your pension and watch daytime telly.

The right figured this out years ago, and took local governments all over the country. We tend to consider town councils, school boards and the like as unimportant, but they set the stage for each level up. The root of the epidemic of right wing gerrymandering lies in conservative takeover of local and state legislature. Having said that, Trump is absolutely the epitome of this phenomenon and should have put an end to celebrities seeking public office.

People get surprisingly invested in their little power positions.

True. I’m always shocked at how cheaply they’re bought when the cover is torn back. Even members of Congress receive surprisingly little when they get busted. Now Manafort, that guy knows how to go for the big bucks.

That Cuomo can be a tricky dick.

Spend the time in a local position to learn how to govern, then run for governor.

But then they’d be sinister establishment members. And god forbid they work with any members of their party who already hold office.

2nd he spent nearly decade in an appointed government position. Was elected to a term as NY attorney general. Before running for govenor. Its right there in the top of the wiki page and doesnt neccisarily cover any less prominant public service or political work he may have been involved with before that. He’s burbled around NY politics since his 20’s.

I was just pointing out that he’s not exactly a paragon of community-based, bottom-up politics as was being advocated for.

He’s not exactly a paragon of anything he’s advocated for.

Both are equally capable of being terrible candidates

I look forward to voting for you when you run

Agreed but the post I was responding to was specifically criticising Nixon for being a celebrity who ‘parachuted’ into politics and wanted to run for a top job straight away and contrasting that with "experienced, qualified individuals’.

In that context, I thought it was worth pointing out that her opponent’s initial qualifications were essentially that he had a dad who was rich and in politics.

That he has managed to parlay that into a long career in government and now has significant experience doesn’t change that his initial ‘in’ was also not running for a lower office and working up.

As you say, he was appointed - not elected - to his initial government positions.

Was elected to a term as NY attorney general. Before running for govenor. Its right there in the top of the wiki page [snip]

It is, although Wiki says he tried for governor before running for AG.

and doesnt neccisarily cover any less prominant public service or political work he may have been involved with before that. He’s burbled around NY politics since his 20’s.

And if we’re counting that sort of stuff, Ms Nixon’s wiki entry, etc. claims that she’s been “active” on political issues for years also…

None of which means I think Nixon is any better than Cuomo.

Just that I think candidates shouldn’t be judged too much by the route they took to get into politics and that demanding that people enter politics at a low level and ‘work their way up’ is at best naive and at worst ends up entrenching the existing political classes.