There’s absolutely no way that this could backfire on them.

There’s absolutely no way that this could backfire on them.

Obvious smear campaign is obvious. Also Cuomo is the very definition of a sleeze ball.

Makes sense - because if you criticize a government, you must be an enemy of the nation, right Mr. Trump?

I used to think that but with politics the way they are these days, people can do a lot of reprehensible things and not have it affect them.

Is Cuomo really a Dem…I mean…is he reallllly a Dem?

This is why voting for establishment Dems this November feels like spraying febreze on dogshit. The alternatives (“stamp on the shit”, “stare at the shit in silence”, “shit on the shit”) make febrezing the dogshit an important and necessary measure, but if anyone expects enthusiasm for the likes of Cuomo they can eat it.

What a sad and true statement.

(gasps) We are friends again!

Is Cuomo really a Dem…I mean…is he reallllly a Dem?

And thats the thing you can keep pointing at him and screaming “establishment dem”. But even though he has a fair bit of connections to national DNC politics. He’s more of a NY political machine politician with cross party ties. Fair bit of the DNC “establishment” wants nothing to do with him. And though he controls the State party apparatus, a fair bit of our state level “establishment” ain’t happy about that. You’ll notice just how uninvolved good ole Chucky Schumer, Mr. Resistence himself, has been in this whole thing.

And Nixon for her part is less an unconnected insurgent. Than an extension of Bill DiBlasio. Who is himself a NY machine politician with sketchy connections. Albiet one more exclusively connected to the DNC and from the party’s progressive wing.

She may be otherwise totally qualified, but lox on a cinnamon raisin bagel? YOU MONSTER.

Well the news and social media are freaking out as much about the tomatoes and capers as the bagel.

And when you get right down to it lox, cream cheese, tomato, and capers is a really hard core. Old school. NYC AF. Bagel order. The bagel shops have that shit for a reason.

And believe it or not various Lox setups on cinnamon raisin bagels is quitely a sort of (gross) cult thing around NY. I know a handful of people who are all about it. People are trying to play this like a pizza with a fork sort of flub. But its more like an anchovie slice while walking sort of thing. 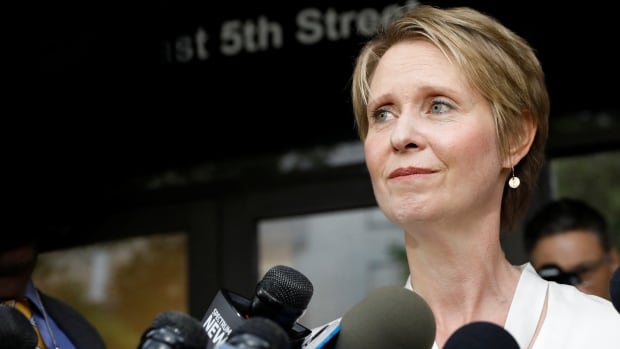 Gov. Andrew Cuomo easily beat back a primary challenge from activist and actress Cynthia Nixon on Thursday, thwarting her attempt to become the latest insurgent liberal to knock off an establishment Democrat.

Despite the rhetoric, Cuomo took Nixon seriously, spending $8.5 million US, largely on ads, in the final weeks of the campaign to answer her repeated attacks that the governor has not invested enough in New York City’s beleaguered subway system and failed to deliver on upstate economic development promises.

There were indications that the 52-year-old Nixon’s aggressive campaign pushed the incumbent governor to the left on several issues, including legalizing marijuana and addressing crumbling public housing in New York City.

Don't Get Mad, but I Tried Cynthia Nixon's Bagel Order "Abomination"—& Liked It

A cinnamon-raisin bagel with lox, anyone?

Since Nixon was mainly running on issues pertaining to NYC, she might have done better running for mayor.

Generally, progressives made a pretty good and important impact in the NY primaries even when they lost, though some of their successes will surely backfire, eg:

She certainly should have run for a city office, or state or federal legislative office representing the 5 boroughs in some way. Not because ladies need to climb the ladder. But because that’s clearly her where her concerns and interests lie. And her relatively narrow focus on the city, however well developed her understanding. Only helped to underline concerns that she was unqualified, or unprepared to run the whole state.

But she was never going to run for Mayor. For one thing current mayor Bill de Blasio has close to 3 years left on his current term. Nixon is a close personal friend of de Blasio, and her biggest bit of political experience is campaining for him and acting as a surigate for his administration.

de Blasio apparently pushed her to run for office. And is supposedly the one who suggested a run for Govenor. But then he made a rather big show of “not getting involved”. He refused to endorse, and would not campaign with her. Pretty much ghosted on the whole Govenor thing. Aside from dropping hints about how he needed to work with whoever won (hint Cuomo is vindictive hint hint).

The uncharitable read is that di Blasio pushed Nixon to run as a test case for his own eventual campaign for Govenor, think he term limits out as mayor after this one. And as a fuck you to Cuomo who has a very loud political spat going with the Mayor.

This is why voting for establishment Dems this November feels like spraying febreze on dogshit.

Right? It’s not like dogshit is going to make that frebreze smell any better.