I have some of the same species who can’t even get along. I wish I could show this to them and have it make a difference.

This is actually a really old zoo-trope. The earliest public museums would put three or four unlikely animals together in a glass box–say, a rattlesnake, a ferret, and some mice. This was an excuse to make some seriously heavy moralizing about the benevolence of creation and what these mere brutes could teach us, etc. etc.

Of course, it only worked because the predator animals were stuffed full of food every night, but I imagine it would have been pretty cool to see a scorpion and a puppy snuggling up in apparent friendship.

Oh sure, this is cute and all, but they are just priming us to accept the inevitable result of gay marriage laws: 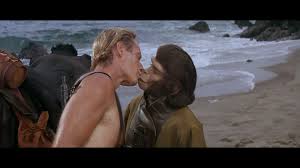 The raccoon kit and that shepherd puppy seem to be trying something that’s illegal in Alabama.

“Oh, come on honey, who cares about our chomosomes not matching . . . we can make it work!”

The pictures are very cute. I especially like the dog and the goat. But with rodents and fowl and hogs and dogs and tortoises and raccoons and skunks all in the same enclosed spaces, sharing the same food and water sources as well as wallows, isn’t this a really uncontrolled experiment in cross-host pathogen breeding? I’m not saying it doesn’t happen all the time at small zoos and menageries, but still makes me wonder if it’s a good idea.

My dog was super cute, loving, and not a violent bone in his body. Until that day he found the den of baby rabbits…

No reputable zoo/sanctuary/refuge would allow these photographs to be published. This is obviously an attempt at promoting an unaccredited roadside attraction. Real animal lovers should avoid such places. For the animals’ own health and safety, they should not be kept in such conditions. And boingboing should be ashamed.

Rocky Ridge is not open to the public, so no roadside attraction issue. All of these photos are from the refuge’s Facebook page. The puppies generally are all up for adoption. She takes in some pretty tough cases, so some of them end up staying. The exotics are typically abandoned pets, and they all end up staying. The Facebook page is part of the operator’s efforts to network the dogs, and raise funds. She doesn’t EVER ask for money, except for efforts to sell calendars, although I expect she gets a lot of voluntary donations.

Those are amazing images.

They could make countless Disney movies by just filling that place with cameras, then cut them together with voice dubs.

You don’t get to see the photos of them eating each other.

Left to my own devices, our house would look like that – good thing that my wife has overriding veto power (and common sense)…

Accidentally replied to you, but I am the same. Here are my little rescue shittens that we bottle fed from 1 week of age, growing quickly: 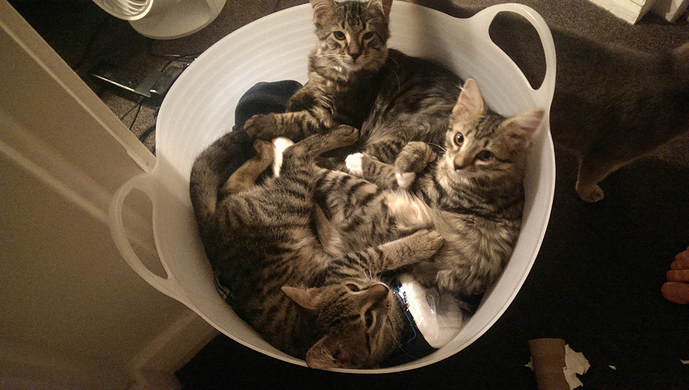 You don’t get to see the photos of them eating each other.

That’s over and done with. Trust me, nature, red in tooth and claw, was at work in a furious fit of natural selection in the days beforehand. What’s left are the nastiest, baddest bad-asses and that’s why they get along - the alternative is mutually assured destruction. You do not want to fuck with those ducklings…

There’s an entire, horrifically depressing genre on YouTube of clearly-faked/forced “unlikely species of animals being best friends” videos that has injected a sad note of cynicism to what used to be my pure, aw-fluffy enjoyment of adorable animals-being-friends photos. I guess once I’ve seen a few of those, even the most-nobly-intentioned animal-rescue mixed-species adorbs brings up a suspicion that rather gets in the way of the aww. Now I just have that sad “well, I guess this is what they feel they need to do to get the donations in” resignation that also accompanies the tear-jerking genre of “grateful brown-skinned children receiving benevolent Western Aid” charity ads.

So cute.
I had two batches of feral kittens every year for a while – fortunately they were the cutest things ever, so they were easy to place in homes.