But thanks to Reaganomics, prison turned to profits
‘Cause free labor’s the cornerstone of US economics
‘Cause slavery was abolished, unless you are in prison
You think I am bullshittin’, then read the 13th Amendment
Involuntary servitude and slavery it prohibits
That’s why they givin’ drug offenders time in double digits

Nearly two-thirds of all prisoners in the US, which imprisons more of its population than any other country in the world, have jobs in state and federal prisons.

There’s probably a good way to do prison apprenticeships, real job training, etc to teach prisoners useful skills in preparation for their release while doing productive work at the same time. But the work programs described in this article remind me of something else: 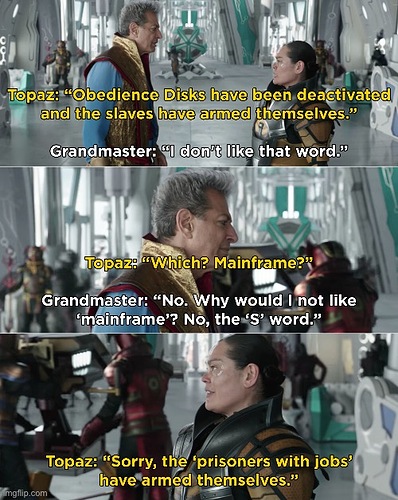 This made me curious what the 13th amendment actually says, which is:

Neither slavery nor involuntary servitude, except as a punishment for crime whereof the party shall have been duly convicted, shall exist within the United States

Nowadays, a prisoner probably would have baked the pie, too.

a winking suggestion about how to carry on having slaves.

That was the exact intent. They knew what they were doing.

Well, yes. That’s exactly what happened. Just like the states being given authority over how they run their national elections was used to deny Black men and later Black women the right to vote.

And the”Missouri Compromise” and the splitting of Dakota into two states and the denial of statehood to DC and, and, and…

Not the Dakota thing, though. That was a fight in the 1880s over the location of the state Capitol and political power centers.

And as I’ve read with the goal of retaining an extra 2 Senate seats. I’ll admit that could be revisionist history.

It’s hardly winking. It’s an explicit assertion of the legality of slavery in our Constitution. Despite the 13th Amendment 's reputation of “outlawing slavery” it pretty much did the opposite, ensuring it’s persistence as a practice into the present and future.

That has been true from day one. That’s why there were so many laws targeting recently freed enslaved people right after the civil war. They made so many things illegal that it was trivially easy to round up a lot of Black people, charge them with crimes, and then sentence them to hard labor. None of this is actually new, except maybe the involvement of large corporations.