Originally published at: Armed folks intimidating voters near drop boxes in Arizona (and nobody has been arrested) | Boing Boing

warned that “voter intimidation” is illegal

To truly get through to these people, they have to add “yes, illegal even for white Christian men”. But given the lack of enforcement of the law, maybe they’re not quite ready to do that.

Be prepared for more of this fascist thuggery in the coming weeks and in 2024.

I don’t live anywhere near Maricopa County, but other people could show up to harass the harassers. See how long they stick around.

Turning out wearing camo and armed to the teeth doesn’t exactly say “I have a sincere and well-founded concern about election integrity.” It says “I never quite grew out of playing soldiers and now I am indulging in some adolescent fascist fantasy in which I am the hero. Also, all this tactical fetish gear makes me feel manly and tough.”

Where have all the gentlemen gone?

I’m SURE Az would love some more Federal oversight there.

Biden should send National Guard, if for no other reason than to yank some chains.

Unfortunately there’s a good amount of overlap in the the Venn diagram of law enforcement and those who suppress voters.

A timely episode of TAL recently covered this exact situation and rode along with one of the “watchers”. Provides a peek into the disturbing and paranoid mindset of these people… 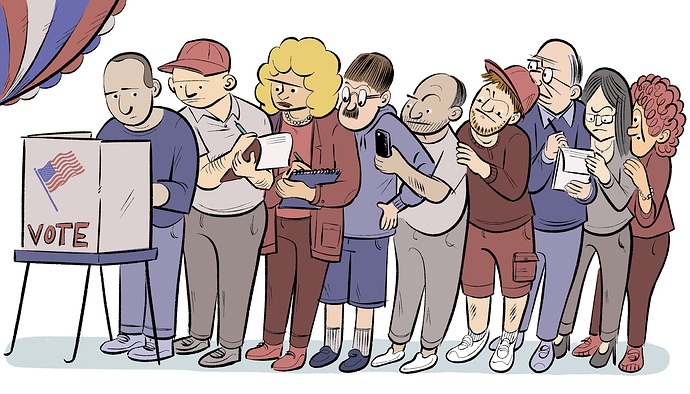 Washington Post reporter, Isaac Arnsdorf, and producer, Zoe Chace, continue the story about the takeover of the Republican party.

Would somebody PLEASE call the FBI in on these whackos?

I suggest going to the drop boxes armed with a cellphone camera. Doxxing these traitors to democracy is likely more effective than calling law enforcement.

Has Trump or MTG praised these “fine patriots” yet?

Because that’s the next step.

Then comes violence, and swift denials and/or claims of a “false flag.”

We have Halloween coming up.

Perhaps if these voters of color would dress up as postal workers, with postal inspectors nearby to catch the action. I would like to see these armed folks start sweating bullets when being informed that intimidating a postal worker (18 USC 111 Assault on a Postal Officer or Employee) is a federal crime.

Also (18 USC 2114 Robbery of a Post Office or Postal Employee) also is a federal crime subject to a 25 year sentence.

Where have all the gentlemen gone?

I suggest going to the drop boxes armed with a cellphone camera. Doxxing these traitors to democracy is likely more effective than calling law enforcement.

The obvious strategy here is to have someone else monitoring the vigilantes, taking down their license plates, perhaps filming them secretly (if law allows), so there WILL be charges when one of these goons goes too far.

Ehhh. you might want to look up the penalty for impersonating a Postal Worker.

Call the cops. Call city hall. Keep calling until they actually put a stop to it.

other people could show up to harass the harassers.

i can guarantee those other people would be arrested or asked to leave.

the best thing to counter this would be something more like what people did when westboro church would show up at funerals: beautiful art to used to block people’s view

Call the cops. Call city hall. Keep calling until they actually put a stop to it.

If nothing else, it’ll annoy the cops and city hall and they’ll do something about it to stop the annoyance to themselves.