There seems to be something in BoingBoing’s code these days that causes articles to come up with a weird doubled scroll bar at the right, where it can be unpredictable which one you’re supposed to use to scroll in the article.

Yep, I’ve noticed this too.

haven’t noticed this, not yet anyway. usually if you post in the “Bugs with the new BBS system” thread, Sam and Codinghorror will reply pretty promptly. They’re gonna ask your OS and browser right away.

I watch all the meta topic, @Dan_Tobias are you talking about bbs.boingboing.new or the main site?

Care to add a screen shot?

It’s the main BoingBoing site, in just about any recent article. 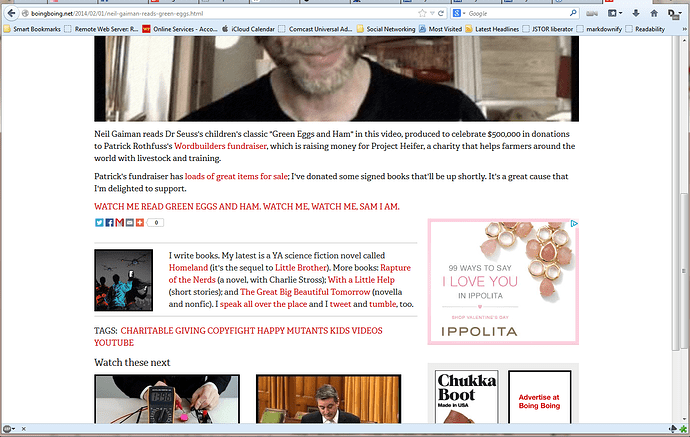 aha @beschizza @deanputney you may want to have a look at this.

Fixing it has been waiting for the redesign. Which has taken rather longer than expected.

What broke it in the first place? Is it something to do with the frickin’ ads? Because just about everything that’s fracked up in websites these days tends to be related to the fraggin’ ads.

I love internet ads. I click them again, and again.

Someone in another thread thought it was a div, id “adskin” that we use for background ads. But I’m pretty sure it’s actually because we use javascript to have the content column match the height of the right-floated sidebar, and that’s just a janky way to do it that will sometimes cock up.

WE’LL DEAL WITH IT. And the dealing will likely involve overflow:auto. EVENTUALLY!

Yeah, I’m pretty sure it’s that min-height rule on #container. If you toggle it you’ll see double scrollbars. For anyone who’s seeing this, the calculated height isn’t quite enough. BoingBoing is calling this on document ready, when 3rd party ads may or may not have loaded fully.

So probably using a different clearing method, waiting for an all ads loaded callback to resize, or just using a css grid would do the trick.

Currently the double scroll bars appear if I whitelist this site with my ad blocker, but go away if I turn the ad blocking back on. So you’re getting me to ad-block your site even though the ads themselves aren’t too annoying.

This topic was automatically closed after 1112 days. New replies are no longer allowed.