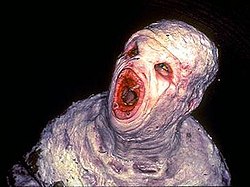 The Host (The X-Files)

"The Host" is the second episode of the second season of the science fiction television series The X-Files. It premiered on the Fox network on September 23, 1994. It was written by Chris Carter, directed by Daniel Sackheim, and featured guest appearances by Darin Morgan. The episode is a "Monster-of-the-Week" story, unconnected to the series' wider mythology. "The Host" earned a Nielsen household rating of 9.8, being watched by 9.3 million households in its initial broadcast. The episode receiv...

this reminds me of the time I found out I had an infestation of Jesus in my eye which explained all those divine visions I was seeing in my morning toast.

I here that “Infestation of Jesus” are opening for “Firenado.”

So the painting we’re seeing is the version he made after he got his diagnosis, then. I wonder what it looked like before that… it sounds quite different and potentially a lot less wormy.

This happened in an episode of House, except it was an autistic kid who kept drawing the squiggles he was seeing.