The only reason for an advanced civilization to visit another planet is to see if there is another civilization which has invented things it has not, and perhaps could not invent. Invented resources are thus unlimited in scale and scope, and can be discovered only in unique places in the cosmos.

Surely if multicellular life exists across the cosmos then evolution itself will have produced innumerable and unique solutions to all manner of problems regardless of whether that process was guided by an intelligent civilization.

So why would an alien civilization seeking out new knowledge limit itself to the study of technologies created by intelligent civilizations instead of the study of life in general? As the author implies there comes a point at which “life” and “technology” are basically indistinguishable anyway.

Those all seem pretty reasonable to me except for #11 – seems like a big jump to assume we’re being investigated by undetectable alien probes constantly. (That said, given the numbers I wouldn’t feel like it’s a solid bet that it’s never happened.) 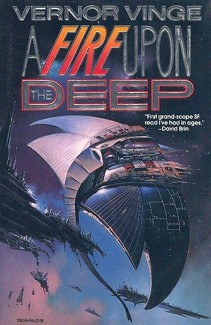 A Fire Upon the Deep

A Fire Upon the Deep is a 1992 science fiction novel by American writer Vernor Vinge. It is a space opera involving superhuman intelligences, aliens, variable physics, space battles, love, betrayal, genocide, and a communication medium resembling Usenet. A Fire Upon the Deep won the Hugo Award in 1993, sharing it with Doomsday Book by Connie Willis. Besides the normal print book editions, the novel was also included on a CD-ROM sold by ClariNet Communications along with the other nominees for ...

We study other human cultures of the past and present too, of course, but learning from each other’s ideas is not our sole source of new information.

I can’t see the rest of the article… the “here” link isn’t working for me?

Perhaps the author believes ET has already unlocked the mysteries of life? For example… where are the ET missionaries?

Perhaps the author believes ET has already unlocked the mysteries of life?

The author seems to be making the assumption that multicellular life is largely predictable and homogeneous across the cosmos but the technologies produced by intelligent civilizations are not.

That seems like quite a leap to me. Evolution on our own planet is absolutely crazy in its variation. Why would we assume that an alien civilization’s artificial technologies would be any more unique or worthy of study than an alien biosphere?

Yup. My take is any interstellar species has either a: gone full Von Neumann, and they’re all bots or b: they run at such a low clock speed, most other meatbags would mistake them for rocks.

I don’t think that we have enough information to make that assumption. The observations we have make me doubt that life is that common outside of goldilocks conditions.

This is also not supported by observations. Hiding a interstellar probe that gets gets close enough to observe our technological achievements is improbable.

It would just be simpler to ask. Why resort to subterfuge?

That seems like quite a leap to me. Evolution on our own planet is absolutely crazy in its variation. Why would we assume that an alien civilization’s artificial technologies would be any more unique or worthy of study than an alien biosphere?

Not speaking for the author of course…

But maybe with ET’s super computers doing billions of simulations a second and the ability to control genetics makes biology studies a mundane and inefficient endeavor?

I think the author is implying they are not studying us, if I’m following. BTW… I believe you are in education? Are you in biologies may I ask?

For sure! But it is also fun to assume and project and pretend to understand.

I don’t think that we have enough information to make that assumption. The observations we have make me doubt that life is that common outside of goldilocks conditions.

Except given the size of the universe, goldilocks conditions wouldn’t be uncommon. One in a billion is still trillions.

I’m broadly in agreement with at least the first 8 of these.

Point 9, the idea that advanced civilizations can build or synthesize anything they need, is one that bears a bit more examination. Obviously, all the sci-fi movies about aliens coming to steal our water or something equally commonplace are nonsense. That said, there are quite likely places in the universe that are relatively deficient in something desirable. Fissionable heavy elements or rare earth metals may be harder to come by in some solar systems or bits of solar systems; on a universal scale, there’s no scarcity, but there’s probably a fair amount of local scarcity.

One of the scarcest resources is probably a functioning biosphere, or the conditions needed to maintain one (protection against solar radiation, adequate energy input, liquid water, etc.) If Kelly is right that DNA or a close analogue is likely to be the basis of life everywhere, an Earth-like planet is a prize, even if it doesn’t precisely match conditions at home on dear old Fomalhaut VII-b. And yes, an advanced civilization – one that’s a lot more advanced than we are presently – could build their own. But that’s a big engineering project. If travel is easy and engineering is hard, then taking someone else’s planet for your own would actually make sense (assuming you’re still in the “fragile biology” stage of your evolution; if you’ve made the transition to a more durable format, you don’t need to be coddled by biospheres and ‘habitable’ planets lose their attraction).

My guess, however, is that engineering is hard and travel is damn near impossible (unless you’re prepared to play a very long game). So I am skeptical about his Point 11. I don’t doubt that there’s lots of non-human intelligent life in the universe; I suspect that pretty much all of it is staying home. Maybe the aliens are sending out robot probes – but to what end? If Kelly is right, the only thing you might want from another civilization is technology that you haven’t thought of. A civilization that is less advanced than yours probably has nothing you want (unless you imagine that they might have somehow stumbled on something you missed, which seems unlikely). A civilization that is more advanced than yours is an existential threat; they might be benign, but if they’re not, you’re taking a heck of a risk by letting them know you exist. Safer to lie low and keep quiet.

I believe you are in education? Are you in biologies may I ask?

Naw, I’m in the visual arts. I do spend a possibly unhealthy amount of my time reading sci-fi though.