“Pay for our TV broadcasts, peasants! No not you, you can fuck off.”

Only one thing to do, lads!

I’m afraid this has been picked up by the sensitive equipment in my Government BS detector van.

When I lived in the UK I happily paid the license, since I enjoyed the content. (Fortunately I only had a B&W TV, and whoever set license fees had determined that I only had 1/3 the enjoyment of the shows that someone with a colour TV would get.)

I’m sure that’s a truly accurate number and not one pulled out of their butts that they think the common man will think ‘sounds about right’?

Cynic! next thing you’ll be claiming that the layout on the sign was so that they could easily replace the

with other street names for different neighbourhoods!

Funny that the one I was able to find was Wood Lane, too. If there’s one street you’d expect people to have been paying the BBC…

Home routers can – and should – block information leakage from the cipherstream by normalising timing and packet size.

According to whom exactly? Also as usual it is unclear if you understand basic networking. A cipher stream may not originate at the router and stream padding at the router or at client side to achieve “perfect” packets is nonsense as the packet may not match various MTU sizes anywhere between source and destination.

Back in 1970 I got a tour of a detector van at an electronics show. Pretty impressive at the time; they showed they could tell what channel you were watching from the street, and even if your set was improperly tuned. Old TVs emit a lot of RF from their local oscillators.

The fact that staged demonstrations are impressive does not mean that the vans can really detect anything. There has apparently never been detector van evidence introduced into a prosecution, which suggests strongly that it does not exist.

UPDATE: The BBC denies it will be sniffing packets from home wifi networks: 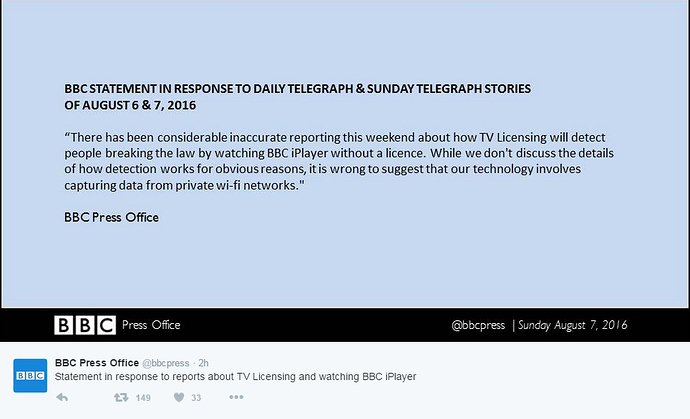 I’m a bit bummed by the licensing change. I have no TV and hardly every watch anything on iPlayer. But it’s hard to avoid clicking an iPlayer clip in an article at least once and - gotcha.

On the other hand, I’ve lived in countries with media directly sponsored by the government (hi, Russia-1) and ones where it’s a free-market concern without public interest (hello, my Fair and Balanced!)

I’d rather pay the BBC.

But it’s hard to avoid clicking an iPlayer clip in an article at least once and - gotcha.

The license only applies to live streaming, not to replay, even on iPlayer.

The license only applies to live streaming, not to replay, even on iPlayer.

True for another three weeks!

From 1 September 2016 you will need to be covered by a TV Licence to download or watch BBC programmes on demand, including catch up TV, on BBC iPlayer. This applies to any device and provider you use.

Anyway, the BBC claims it will be detecting streaming “the same way” it detects TV transmission. I think this rules out anything technological; just make sure there’s nobody standing over your shoulder when you click the links.

"[quote=“doctorow, post:1, topic:82898, full:true”](if my license fee gives me the right to watch the BBC on all my devices, and I go to someone’s house and watch my devices there, it doesn’t matter that they haven’t paid the license, because I have).
[/quote]

Unless you’re plugging the device into the electrical supply of the house you’re in. So you can watch it on your tablet in someone’s house using your own license, but if you need to charge the battery, you can’t do that and watch iPlayer in a house that’s not covered by a license. Presumably the iPlayer application on Android/iOS will read battery status, and see if it’s charging, to try and catch people out there!

There is a similar concept in german law (or more specifically in the Rundfunkstaatvertrag) called Staatsferne (independence from the state). But there is a constant push by politicians to take more control followed by a slap down from the constitutional court - it’s a fight going on for several decades.

The problem is that if we allow the licence to come from general taxation, that gives the government of the day more power over what is broadcast.

Would the government suddenly own MORE than 100% of the BBC, as is the current state of affairs?

And yet these same asshats have always refused to let me pay for a license because I live in the US.

It’s a long commute to your place, from BBC HQ, to sniff to see if you purchased the correct license(s).

Pretty much. Consider that most British homes were built before 1990. Wiring is a big hassle.

At the moment, the government can only change how much money the BBC gets every 10 years, when the BBC charter is renewed. Moving to direct funding from general taxation would mean that the government could change their budget at any time.

I believe in public broadcasting, and I believe in charging for it in a fair way, but I can’t square that circle.

Moving to direct funding from general taxation would mean that the government could change their budget at any time.

But they are government owned already. That fox is already in the henhouse.