Well, the important thing is, he learned his lesson: bribery works.

German court agreed to end his trial when Ecclestone offered to pay the court $100 million.

Justice was served in the end, thank Dog.

I guess it’s a good thing for the court system that it wasn’t a murder trial.

Ending your bribery trial with a bribe is so meta…so postmodern…figures he’s German.

Remember: Money can’t buy you love, but it can buy you freedom everything else.

So this is apparently perfectly legal in Germany. And I guess in one sense, he’s literally paying his debt to society- $100 million can go a long way towards a lot of things. But especially considering bribery is the crime he committed in the first place, it seems awfully hypocritical and messed up. Isn’t the point of arresting him for bribery in the first place to either punish him or reform him so he doesn’t do it again? Considering how insignificant $100 million is for this guy, this accomplishes neither.

Ecclestone net worth is 3.1 billion US.

100 million dollar [get out’a jail card] to this privileged asswipe is synonymous with us regular folk ordering extra cheese on a pizza.

The Germans have no word for irony. True story.

Where have I heard that before?

Isn’t the point of arresting him for bribery in the first place to either punish him or reform him so he doesn’t do it again?

The motives of a justice system vary greatly based upon the class of the individual negotiating it. (At least in America). 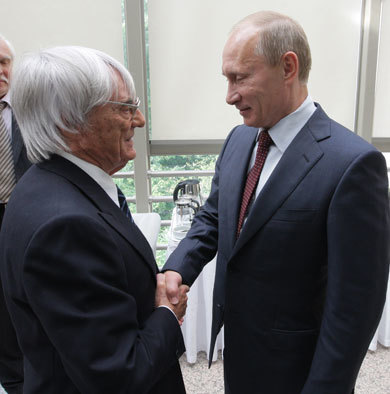 Are you kidding me? The guy just paid the court and walked?
Jesus, in other parts of the world the courts at least pretend to be righteous.

So he paid a fine?

Also, it appears he saves money by cutting his own hair.

If convicted, he was facing a ten year sentence. (though perhaps he’s too old to jail.)
There’s also no record of a conviction.

I’ve followed F1 for about 25 years, and while I agree that Bernie is essentially poison to the sport. I’d like to clarify the accuracy of your statement. Mostly because I always want people to truly understand the relativity of super wealth (not to say that you don’t)…

(better minds, feel free to check all my calcs on this)
His worth is 3.1b. 100 million of that is actually 1/31st of what he is worth.
After checking various sites providing census data from 2010, the average U.S. citizen has an average net worth of around $144K (including home equity). Granted, these are “big swath” averages, but go with me here… So 1/31st of that would be about $4600. Not exactly an extra $.50 for added cheese.

Bernie won’t be scouting 1-bedroom apartments in Wisconsin due to this, but it is (somewhat) substantial. Granted, I get your point… 100mil to Bernie will have no effect on him, whereas your average Joe having to cough up $4600 would (in most cases) be a significant impact. I just like to paint an accurate correlation of mega-rich vs. average guy whenever possible.