Being neither desperate nor poor, I categorize my occasional lottery ticket buying as “entertainment.”

Lead is still used to repair old cast iron pipes. And in most of the solder used to attach copper fittings. And if the bronze valves in your house aren’t slightly pink in color, they also contain lead. Many sources which are only very slowly being taken out of the supply system and even slower from dwellings.

@crashproof: I like to pretend it’s a sporadic donation to the state coffers which is supposed to go to our schools and roads, but really just goes to private prisons and contractors.

Neither is bottled water.

How is it not? Did you watch the video?

Bottled water is more about the bottle than the water. What you are buying is convenience.

Compare it to beer. I am a home brewer. The beer I make at home is excellent (IMHO) and dirt cheap. Yet, when I’m at a baseball game I’ll still buy a beer from a vendor even though I have a tap at home with beer that’s inexpensive, tastes as good or better, and produces less waste.

You got your wife to do a blind taste test to prove she prefers bottled water?

There’s a large market for bottled water for home consumption because too many people have been lead to believe by marketing and/or neoliberal rhetoric that their local tap water is unsafe. In some places, taste may be a legitimate gripe, but generally nothing that can’t be fixed by paying to upgrade the local water plant and/or distribution system. Well systems are a different animal, but taste and safety issues can be dealt with by using home softening and filtration systems. Bottled water is largely a solution in search of a problem.

The city hall / municipal building (I forget if it is the historical or current/still use civic building) in Florence, Italy has, just around the corner from a reproduction of Michelangelo’s David, an alcove with two water taps on it.

One has regular water . . . the other, what Italians call “gas.” Fizzy mineral water.

On tap, for free, on the side of City Hall.

The mayor got sick of empty water bottle litter, and had the “gas” tap installed so people could fill up their own containers.

How insanely great is that?

I’ll have to see if I or a family member took a picture.

YES! We could have some sort of subscription service like a Netflix for water!

Bottled water is largely a solution in search of a problem.

Bottled water is a solution to the portable water problem. You’re thirsty, in front of a vending machine that has coke products, including their brand of bottled water. Would you buy a bottle of coke rather than water just because you could drive home and get water for free? Do you ever pay for a beverage?

The condition of entry isn’t the point. Many ballparks allow people to bring in their own water if they want. People still purchase water at the ballpark. Ballparks have free water fountains everywhere, but people buy water from the dude walking down the aisles because it’s more convenient.

There are lots of things that exist because they are convenient. What is it about bottled water that makes people unable to see that?

Right, but still people buy both.
The size of lottery ticket sales in all the US states is over $60B. This is a $60B tax on people who are ignorant of the futility of buying a lottery ticket.
Bottled water is equally stupid, but for other reasons.
IMHO the problem is not bottled water or lottery tickets, but the marketing people who prey on good intentioned, but otherwise unfortunately gullible people to convince them that these are good purchases.

However, it’s still recommended to run the tap for a few minutes in the morning before using the water.

I work in an older, gov’t. building where the sinks and water fountains have instructions to run the overnight water for a minute or more. It’s because they used lead solder for the plumbing, but in casual conversation around here you’d think they had used plutonium, and/or that it isn’t water at all, because government building = secret and/or incompetent experiments.

EDIT: There are probably any number of much older buildings with lead plumbing, that don’t have the instructions only because they are private, not gov’t., buildings.

There are still places in America where the tap water tastes like ass (Big Island of Hawaii), catches fire (areas where fracking is conducted nearby), or is otherwise unpalatable for the purposes it was originally intended. In those places, yes, I see the appeal of bottled water; otherwise, I drink from the tap wherever possible.

Now this is an infrastructure project that people would vote for.

Oh man I am now having flashback to pulling out all the lead pipe from the house I grew up in back in St. Louis. That was a fun week.

Seriously? Were you at least wearing gloves and a mask?

You know Grond from the Two Towers? 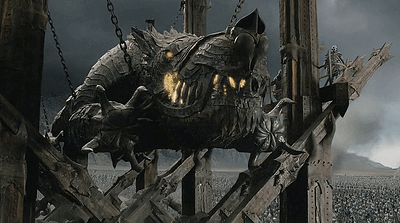 The model was 20 feet long, 3 feet high, made of lead plated on top of a wire skeleton, and in the Blu-ray extras for the extended edition (Yes, I’m that kind of nerd, and have watched every last second of my 3 6-disk sets including all the commentaries), they show footage of the people at WETA working on it with thin latex gloves. That’s it, no further safety precautions.

What back then in the early 80s? Nope. My dad did most of the removal and no real ripping/cutting just a lot of unscrewing as it was still quite intact just full of build up so no water pressure. I hauled it out of the basement to the yard and then did a lot of soldering on the new copper pipes. The major suck was not having running water for a few days.
This is a memory that always makes me think yeah home ownership is not always the bestest of things even though I currently am paying a mortgage.

edit: I play tabletop games and have done for a LONG TIME. I still have lead minis but honestly unless you are doing things that make lead powder and sprinkle it on your cornflakes it really isn’t much of an issue as far as it getting into your system. That said I really really like the current push to plastics and new non toxic resins. And standard resin is way worse to work with for you than lead was.

The water in Barcelona is certainly not undrinkable. It’s not the best tasting water around, but it’s certainly not the worst I’ve had either; and it is perfectly safe.

Buy a filter system for your tap, or a filtered jug or two for your fridge and a filtered water-bottle for when you’re out and about. Don’t support a totally unsustainable and morally bankrupt industry.