Whoops. Link and picture attribution got garbled there somehow. Must have been Little Bobby Tables. 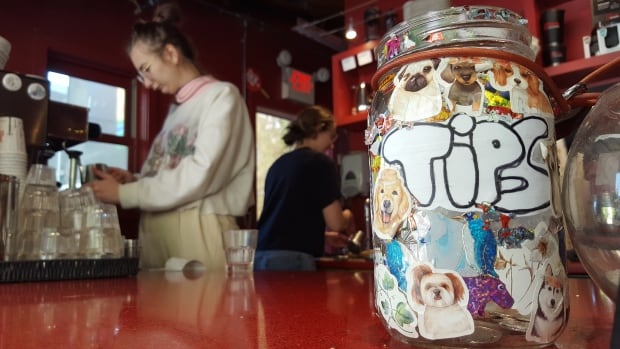 Workers in British Columbia's service industry are welcoming a new piece of legislation that will prohibit employers from taking a share — or all — of the tips left by customers.

What if you’re self-employed?

Instead of this halfway measure, they should have just outlawed tipping entirely (like in parts of Europe). Tipping is unfair to customers (who are guilted into subsidizing wages), unfair to servers (some make less than minimum wage while others make way more than you’d expect depending on the clientele of the restaurant and nothing to do with how hard they work), unfair to taxpayers (a LOT of cash tips go undeclared), and unfair to other restaurant staff (who have far more to do with quality of the meal than the server).

It’s a start, but unenforceable unless the employer is really careless. All they (the employers, to circumvent the law) need to do is invoke a “tip pool” policy to share a percentage with all employees; a common, and popular practice. A dish washer or bar-back can make an extra $100+ for four hours work without actually being tipped by a customer. But then no-one can really say for sure if mgt divided up the loot as promised, since it all disappears into their hands and back out onto paychecks days or weeks later, and no-one knows their formula anyway. Employees could hardly keep track of everyone’s schedules and tips collected, in order to check the figures. Of course, the mgt will always err in their own favor too, heh.

I never understood how this was remotely legal to begin with.

All they need to do is invoke a “tip pool” policy to share a percentage with all employees; a common, and popular practice

This is the source of the problem, unfortunately. Employers decide they get a 100% share of the tip jar, and everyone else gets 0%.

I like the idea of outlawing tips for the reasons you provide, however… the last time I talked about tipping and running a restaurant (I do tip, I don’t run a restaurant) I got tore apart, so I’m trying to think how to approach this discussion.

I should also mention that my wife works at a restaurant that pays everyone minimum wage or above, and tipping is discouraged. If a diner insists on tipping, it’s shared around with the people on staff that day. Management never touches it, and it doesn’t end up counted as income on taxes since it never amounts to over $600 in a year, since most people don’t insist on tipping.

At this point tipping is pretty entrenched in most dine-in restaurants (and other places).

The owners are allowed to pay sub-minimum wages on the understanding that the servers can make up the difference – and potentially exceed it – through tips.

If tips are outlawed, the owners will have to make up the difference, even the ones that aren’t already skimming/taking all of the tips.

Prices will go up. But prices are going up anyway.

The waitstaff that were making more than minimum wage through tips will suddenly find themselves in a shortfall situation.

Of course the ones that weren’t being well tipped will see an increase in their pay, so it’s certainly an upside for them.

How is it working out for the EU countries that have outlawed tipping?

I suggest that staff be paid at least minimum wage, and also benefit from a transparent profit-sharing program. They can cash their profit out, or purchase ever-larger decision-making stake in the business. This might more-or-less be considered a kind of co-op.

Fear of retribution from employees has been my observation the best deterrent to this heinous crime.

What if you’re self-employed?

We send a moose around weekly and you give them the tips.

There were provisions for owners that also perform roles that would be tipped to designate themselves to receive a share.

Wait staff is BC at least have to be paid minimum wage regardless of tips etc. AFAIK nobody is allowed to work for less than minimum - for awhile we had an awful ‘training wage’ for the first 500 hours (prompting many employers to ‘let go’ staff at 499 hours, rinse repeat).

I’ve worked in restaurants (in the back, cooking) where we all got tipped out nightly. I’ve also worked in one (a chain) that held onto the ‘tipout’ for months, and if you left or were fired before the end of the busy season you got nothing. Which of course allowed them to make people work 80 hours weeks and be total assholes, because everyone was beholden to the tipout. (I didn’t make it, left for a better job after a month or so).

Employers are not allowed to get any of the tips - including the ‘manager’ who makes little more than the server. Owners have been allowed to pool the tips, first to make sure the back staff get a fair cut and second, to make sure the wait-staff pay the proper amount of tax. Predictably, this has been abused.

TIL: British Columbia only now passed a law against stealing.

I Agree we are best off living in a totalitarian system where every cent is accounted for with surveillance. I am also very concerned that stopping waitstaff , chamber maids, tour guides and buskers from receiving tips is not going far enough .
the kid who rakes my lawn and extorts me for 10 bucks in undeclared cash we need to get him too or he’s going to grow up thinking he can become become the underground kingpin of illegal lawn care pimping out his schoolmates from the lower grades over the darknet to rake lawns on his behalf. the system needs more control. we must stomp out anyone who gets a little bit unseen by the watchful eye of the system, that undeclared money could be used to to pay grants to multibillion dollar corporations and then some of it would trickle down to us . I am with you my friend.

This is what I see my parents do whenever we eat out: They place the tips directly into the service employee’s hand and fold over said employee’s hand as if they were passing on a secret message.

I never understood how this was remotely legal to begin with.

The practice is at least as old as baksheesh, and that’s pretty damn old.

FWIW, there was a restaurant that voluntarily tried this policy in BC in 2014…

'No Tip' Restaurant To Open On Vancouver Island

A B.C. restaurant may become the first in Canada to ban tipping, which the owner calls a

AND THEN BEFORE 2014 COULD FINISH…

Just three months after a Vancouver Island restaurant made Canadian hospitality history by outlawing the tipping of servers, gratuities are back on the menu at the Smoke ‘n’ W…

Owner David Jones said the restaurant has decided to scrap its no-tipping policy in favour of a traditional restaurant model as a result of customer demand.
… >>snip<< …

As a result, the restaurant switched Thursday to the traditional model and dropped menu prices, as well as staff wages.

Tried to just pay the staff well and drop the whole tipping pretense and people just weren’t having it (plus a few other factors).

//EDIT: forgot to add that the restaurant is still there if you’re curious.

Where is tipping waitstaff illegal?

There are plenty of countries in Europe where it’s not customary, or where it’s not usual and you only tip (a small amount) as a gesture of appreciation for uncommonly good service. But none that I’m aware of where it’s actually banned.