was it this one?

because if so that the crew this BB article is about.

Could have been? They posted a video later saying how they had screwed up and had gotten checked out by a doctor or something.

As someone who knows a little bit about boats and sailing, that picture makes my teeth itch.
The first thing that is going happen to that when the floods start rising is that it is going to tip over.
Also, there is clearly no room for the unicorns.

You know it’s going to turn out that the big boat was funded by BIG BOAT.

My relatives in Minnesota (land o’ lakes) got the idea to build a 50’ ferro-cement sailboat c.1973 and went as far as buying a few supplies. Then they got a ride on a sailboat in the ocean, decided that it wasn’t any fun, and sold the stuff at a loss.
At least they didn’t get very far on their folly.

I can say this because it turned out well for me, but there is zero doubt it was a foolish decision at the time.

Hang out in a pub in Gibraltar, get drunk with another pub denizen who says he is sailing to the Caribbean the next morning. Agree to go along. 4 men in total on a 31’ boat (along with one amazing Canary dog). Myself, my childhood friend who I was backpacking with, the skipper, and a British guy that I am fairly sure was on the lam. Partway through the voyage it became clear the skipper was also leaving to avoid police attention. And a half pound of hashish which we had to use up before arrival.

If I was offered the same thing now I would refuse outright, but I got lucky and had a great time. It was a singular experience that changed the course of my life in more ways than I can fully communicate.

This guy should have at least bought an old boat and tried a few weekends before committing to his massive project.

You don’t even need to buy a boat or pay for sailing lessons to find out if it’s something you’d enjoy. As it happens, there are a ton of boat owners who are always looking for crews, even folks with no prior experience, to help out on everything from local day sails to ocean crossings, and several major websites are out there to connect crewmembers to boat owners. Many owners request that you just pay for your own food expenses but some will pay you for your help. Why not do that on a few different boats to at least learn some basics and find out what kind of boats you like (if any) before building your own? Seems like the guy is staying willfully ignorant as a point of pride or something.

In my own case I had a good idea of what kind of boat I wanted, then took a sailing lesson in one just to be sure before buying one on craigslist for $900 (including trailer!)

My comment was based on an article I read where it talked about donations. Their website has a donation link and a list of things they need if people want to buy them something specific. That’s separate from video and merchandise sales.

Again, I’ll say there’s nothing inherently wrong with that. My YouTube audience sends me tons of stuff for free. I don’t have wish lists, but my viewers have asked me to set them up. When you make good content, people want to pay for it and want to support you. There’s nothing shifty about it, and it isn’t charity. Again, making the videos is hard ass work and people get that.

This was absolutely my dream when I was 20, same experience with sailing, same plan to build a boat. I went as far as buying a book on how to build a boat, and a few dozen issues of WoodenBoat magazine.

Every now and then the urge to do it grabs me again, but by now far too much life has gotten in the way. I couldn’t do it now but I should have done it then. Life lesson for young people, I guess.

I never said it wasn’t.

So how does a 30 year old who’s jobs include stints as a teacher and a store worker cash in his life savings to spent 8 years building a boat from trees on his own property?

Some twenty years or so ago, an ex coworker of mine bought a boat and sailed it to Australia. It was 35 - 40 feet or so. He was single, in his mid thirties as I recall, working as an engineer. He spent the first part of the trip sailing up and down the west coast of North and South America, then set out into the Pacific with a few different ship mates. Once he got to Australia I guess he had had enough of that, sold the boat, and came back to the U.S. to lead a once again normal life.

I don’t know if the boat in the article would be more expensive than just buying an existing boat, especially since the raw material for much of it grows on his property.

Also, these guys seem to get a lot of volunteers to help out, sort of a stone soup situation.

Of course once they get into actual water, that’s when things get serious.

I thought I felt the call of the sea, but it must have been something else. Someone later said to me that it was like standing in a cold shower while gagging yourself with a spoon. For a very long time.

I don’t know if the boat in the article would be more expensive than just buying an existing boat, especially since the raw material for much of it grows on his property.

Based on what I’ve seen browsing on Craigslist I’d definitely wager that a used boat would cost less. Even assuming that every bit of the wood is free and forgetting the huge amount of labor, there are a ton of miscellaneous parts required for the rigging, engine, fresh water system, radios, electrical, and any number of other things. Maybe he can get that all donated but it would probably be a lot easier to get a whole used sailboat donated instead. A lot of people are desperate to get rid of them, especially when they have a deadline to vacate a slip.

As the old addage goes:
“The two happiest days of a boat owner’s life are the day he buys his boat and the day that he sells it.”

Here’s one very typical example of a 27’ boat for sale for $1000. Owner sounds desperate and you could probably negotiate the deal so that he pays you to take it: 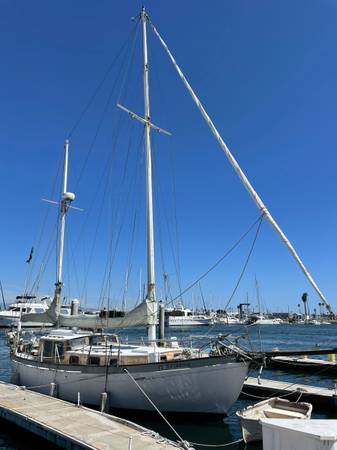 $5000 or best offer. 43' wooden ketch built to the atkins "thistle" design, a double ender customized to be slightly larger. 6' standing headroom below, a very comfortable boat. Launched in 1964,...

The “midlife crisis” tag … suggests this is just a relatively harmless exercise in vanity rather than a stupid, probably fatal mistake.

In my motorcycling days, I met plenty of novice riders in their 40s on 1-litre sports bikes. I often equate “midlife crisis” with “stupid, probably fatal mistake”.

Of course once they get into actual water, that’s when things get serious.

My mother had a co-worker in NJ who talked about retiring on the boat of his dreams for about 30 years. They threw him a big retirement party, and shortly after that he bought a boat, took lessons, and was ready to go. After one trip from NJ to Florida he’d had enough of the experience. I understand that his wife was very upset because selling a boat wasn’t nearly as easy as buying one.

Based on what I’ve seen browsing on Craigslist I’d definitely wager that a used boat would cost less.

I’ve been waiting for one of these to go into production (the sail kit). However, my interest is limited to navigating bays or inland waterways. There’s no way I’d try something this small on the ocean: 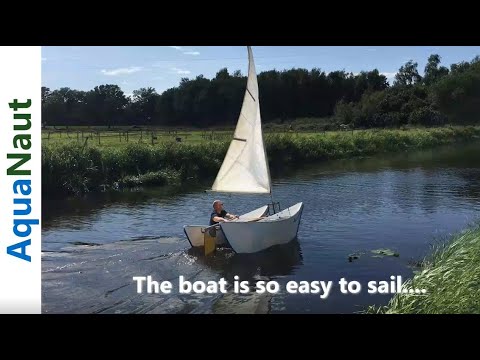 Caddo Lake (TX) used to have a working quarter-scale steamboat, but it was damaged in a hurricane, and the owner was never able to raise enough funds to rebuild it. It’s too bad - this was a great, peaceful way to spend an afternoon on the major channels of Caddo Lake (the channels were cut through a heavily forested swamp to move lumber from east Texas).

Seems like a very drawn-out way of killing yourself.

“Find what you love and let it kill you. Let it drain you of your all. Let it cling onto your back and weigh you down into eventual nothingness. Let it kill you and let it devour your remains. For all things will kill you, both slowly and fastly, but it’s much better to be killed by a lover.”

Launch a Kickstarter and generate Youtube traffic, move to rural New Hampshire and dumpster dive as much as you can along the way. It’s not an expensive place to live.

If he’s got family money he doesn’t have a lot of it.