FFS. Mightn’t it be a little more cost effective to invest in some seriously heavy duty desalination technology R&D instead of, y’know, destroying the whole state?

Combine this with ocean levels rising looks like earthquakes will not be what sinks California.

Oh, for the days when the population of this country was half today’s and we thought over-population would cause pollution and hunger problems–maybe also drinking water and agricultural problems. But sinking states? Of course we were already passing the 1955 mark on the telephone pole. Take me back to the bliss of ignorance!!

I mean, we all figured out what Soylent Green was long before Charlton Heston cries it out at the end of the movie. It was only logical. But, had “Soylent Green” been set in LA and had Heston cried out, “California is Sinking.” Despite existing documentation, that might have stirred things up a little.

to this i say:

FFS. Mightn’t it be a little more cost effective to invest in some seriously heavy duty desalination technology R&D instead of, y’know, destroying the whole state?

No. No it wouldn’t. Even the best desalination technology requires you to do something with the inevitably massive amount of salt you have left over.

Greywater recycling is far more practical, but it still wouldn’t get you anywhere near what you’d need to support agriculture.

Geoengineering oddly might be the most practical of all for bringing water to a place that normally has water like California.

Desalination comes with its own problems. Firstly it’s massively energy intensive; and unless California rapidly ramps up its ~19% renewable energy mix that means a lot more carbon emissions. Secondly, all the chemical tainted brine leftover from the process inevitably ends back in the ocean where it kills marine life, or piled onto land where it sterilises the earth.

If this drought doesn’t break soon, California might need to rethink its massive agriculture industry.

The issue is that California’s current market-basket of agricultural enterprises simply doesn’t fit the climate anymore. There is a downside to having too much of -anything- in one place. Too many creatures, you get starvation. Too many heavy elements, you get nuclear fission. Too many people, you get Democrats :smile

Any real policy remedies for groundwater depletion will have to change the market-basket of goods that California agriculture produces. If this means moving some agriculture elsewhere, then that’s the sort of of change that needs to happen. You cannot simply continue pumping groundwater. Eventually, you’ll get down to the saltwater, contaminate your wells, and destroy your land.

Try farming somewhere else for a change

I thought the rapid drop in Solar prices might be a solution – desalinization requires lots of power, CA has lots of sun, solar is as cheap as it has ever been and still decreasing in cost… still doesn’t solve the “what the hell do we do with all this salt” problem as @aloisius noted though.

Humans as a species gave the illusion of free will. “If we wanted to”(we say to ourselves)“We could control our numbers, stop a runaway greenhouse effect,only use the water we have available, et cetera.” These seem like plausible statements, because as individuals we make those kind of long term self preservation choices all the time. Yet all existing data suggests that it’s not a matter of being unwilling to act in our own collective best interest, we are actually incapable of doing so.

This use of fossil water is a short term thing that is going to stop. If we were the rational beings we think we are, then we’d stop doing it in a logical, controlled way that leaves future generations with some options. But since we’re actually unreasoning animals with no real concept of a collective future beyond our individual lives, this is only going to stop when the water runs out, and there are no more options for anyone. And the consequences will be every bit as bad as when unpredated deer on an island over graze their carrying capacity and have a massive die off as a result. It doesn’t count that we could look ahead and forsee this future, it only counts that we didn’t actually do anything about it.

Humanity, I love you to pieces, but you really piss me the fuck off.

Nope. The problem is that farmers can basically suck all the groundwater they want for free (excepting the cost of actually pumping it); desalination is prohibitively expensive enough for drinking water (where it’s replacing treated water), much less for agricultural uses.
Basically the farmers of the Central Valley are permanently fucking both themselves and residential water users there - the aquifers will never recover (at least in terms of civilizational time - they’ll eventually refill in geologic time).

I thought the rapid drop in Solar prices might be a solution – desalinization requires lots of power, CA has lots of sun, solar is as cheap as it has ever been and still decreasing in cost.

Even leaving aside the salt issue, it’s still incredibly expensive. They’re spending billions building a number of desalination plants for urban water districts with no other water sources, but since 80% of water use is agricultural, it doesn’t help because it can’t compete with “free.” Desalinated water is $2,000-$3,000 an acre foot, making it more than twice as expensive as recycling sewage into drinkable water. Farmers that don’t have water rights (that allow them to pump directly out of waterways and aquifers) and who pay for water are used to paying about $140 an acre foot. The power required to purify one acre foot (roughly one family’s annual water use) would power almost 100 homes for a year. I wonder how many plants will be built and never actually used, like Australia’s recent desalination boondoggle, or the last desalination plants they built in California.

Desalinated water is $2,000-$3,000 an acre foot, making it more than twice as expensive as recycling sewage into drinkable wate

How much of that is power costs, though? Like if you had theoretically insanely cheap solar, installed for free, how much would that move the needle? I am curious and you seem to know. 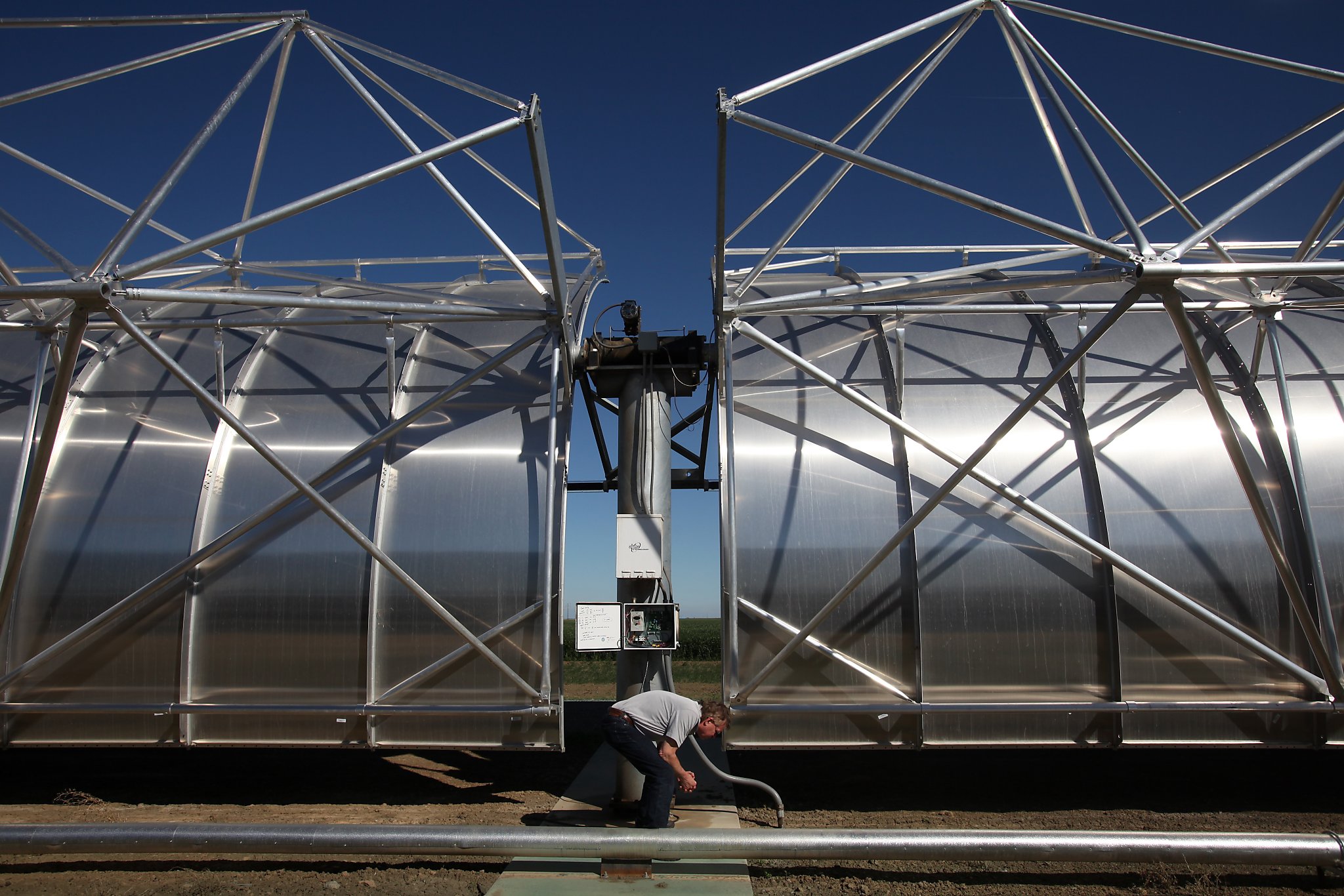 Quietly whirring away in a dusty field in the Central Valley is a shiny solar energy machine that may someday solve many of California's water problems. [...] within a year, WaterFX intends to begin expanding that one small startup plant into a...

His solar desalination plant produces water that costs about a quarter of what more conventionally desalinated water costs: $450 an acre-foot versus $2,000 an acre-foot.

Although reading more closely what they are doing is closer to fixing up brackish fresh water, not converting seawater…

I’m sure you’re quite right. The destruction of the entire State of California would be more cost effective than researching and developing more advanced forms of desalination (implying taking care of the current issues with the state of the art).

Desalination comes with its own problems.

Yes. Hence my suggestion that seriously heavy investment in R&D would be needed before the option would become viable, and that even the astronomical amount of money needed to come up with solutions to those problems is still preferable and more cost effective than destroying the entire state.

and @shuck, you appear to have disagreed with me by agreeing with me.

Please, all of you, turn in your nitpickers badge and gun and hang your heads in shame.

I’d suggest to just dump it into the ocean. Somewhere deep enough that it won’t have much life to influence there. It will cycle back to the rest of the seawater over time - but the isolated freshwater will do the same, it evaporates from the land and rains, and goes to the wastewater, and all those other pathways back to the ocean, so at the end there’s no accumulation of salt to speak about.

The energy is the bigger problem.

…also, what about gene-modding agricultural plants so they can tolerate growing on seawater?

Seems like it’s just a costly engineering challenge to attempt to put the water back, and as @shaddack notes, the earth is a closed system, with more water from polar ice melt becoming ‘available’.

I like the idea of firing stuff into space though @codinghorror, maybe we can use the salt from desalination, in combination with a sky hook/space elevator to push space junk out of orbit? Although not too much, don’t want to interfere with orbital paths too much for too long… but perhaps such a system could also be remotely set up to alter dangerous comet paths…

Normally energy makes up about half the cost of operating the plants. From what I’m reading, the $2000 an acre foot is the cheapest end using current tech. I don’t think anyone’s even factoring in the environmental costs of dumping a gallon of heavily salinated water for every gallon of fresh water extracted.

Although reading more closely what they are doing is closer to fixing up brackish fresh water, not converting seawater…

Yeah, it’s irrigation runoff, so it’s only slightly brackish, no less, which is what accounts for the lowered costs.

that even the astronomical amount of money needed to come up with solutions to those problems is still preferable and more cost effective than destroying the entire state.

My point was: apparently not. Because it’s not the entire state, just portions of it. It does seem like it’s more economically viable to just permanently fuck those areas, at least from the farmers’ point of view. It’s not worth it for the farmers to pay for the solution, and they don’t contribute enough to the economy/the value of the agricultural products from that area isn’t enough to justify everyone else paying for it either.