Not difficult folks. Give all kids free food while at school.

B-b-but what if this leads to a situation where children become dependent on food??
/s

Yep. This is a great move. Good on CA and Newsom!

This is wonderful, but to clarify a detail: it’s the SECOND state to do this, after Maine. 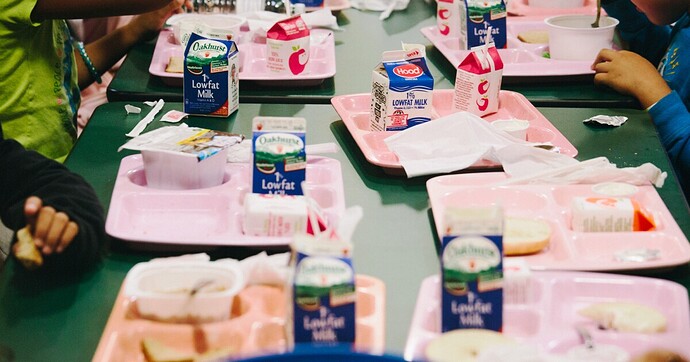 Maine's Budget Bill Includes Free School Meals For Every Student - What That...

Maine is one of the first states in the country to take this step. Reporter Robbie Feinberg spoke with Amy Regan Gallant, the vice president of public policy and research at Good Shepherd Food Bank about the legislation.

That’s wonderful. Yes, do it nationality.

Thanks for the reminder! We’ve had so many positive changes since we got rid of LePage. Here’s hoping we aren’t burdened with him again

Two things: Yes, this is good, and I hope it will instill in students the idea that helping some people helps everybody in the long run, and that when some things they’ll encounter later in life they’re told “this would be good, but we can’t do it” will lead them to not accept that, but question why.

Second: tracking. How much of this will be tracked and kept in a database, and how much of that data will be sold commercially? I remember in my school about 25 years ago everybody was issued a lunch card with a barcode on it, mostly because the majority of students qualified for free lunch. I was privileged to not need free lunch, and also my mother was able to pack my lunch most of the time. Sometimes, though, she would be in a rush and just give me money to pay for the lunch. A few times I just had to do without lunch at all because I had misplaced my lunch card, and they refused to sell me food because they couldn’t track who it went to, even if it was being paid for.

My guess is that they will use student IDs. Kids need them for just about everything and most CA schools require students and teachers to wear their IDs while on campus.

If students forget to bring their IDs, they can’t get on campus and have to get a replacement ID.

tracking. How much of this will be tracked and kept in a database, and how much of that data will be sold commercially?

If anything this change allows for more student privacy than the previous system. In the era before all students became eligible for free lunch it was necessary to have some kind of database indicating which students were eligible and which ones were not.

Changing the system so any kid who shows up to school can grab a free lunch from the cafeteria eliminates the need for collecting that data.

The need maybe, unfortunately perhaps not the will.

Selling the data on kids who eat lunch…?

Selling the data on kids who eat lunch…?

How and why collect that data in the first place though?

When my kids’ school started offering free lunches they didn’t suddenly implement a tracking system to learn which students were eating at the cafeteria vs. which ones were bringing lunches from home. Doing so would just create an unnecessary new hassle for the school.

You and me understand that but some asshat out there will be trying to do it anyway, right?

Maybe, but to my knowledge it hasn’t happened so far. Not sure how they’d even go about it if they’re no longer requiring students to use vouchers for free lunch.

You and me understand that but some asshat out there will be trying to do it anyway, right?

I really dont see any evidence of a push for that. My kids’ schools certainly didn’t start collecting data or scanning ID cards when they started making lunch free. All the food is just grab-and-go. Seems to me that the data would need to be awfully valuable in order to make it worthwhile to set up such a system, and in this case I’m just not seeing it.

If you’re concerned about marketers tracking kids, phones and school-issued laptops is where the useful data comes from, and in that case you can have software do all the legwork instead of implementing a labor-intensive check-out system where none currently exists.

Maybe, but to my knowledge it hasn’t happened so far.

I really dont see any evidence of a push for that.

Methinks you severely underestimate the bottomless greed of those who hold power.

Tam is right to be generally suspicious of everyone who has any kind of authority, but especially as it pertains to education…

I suspect that the data isn’t desperately interesting to commercial brokers(likely to be worth something; but there are only about a zillion usable proxy variables for “poor: yes/no?”, and given the limited number of options typically provided in the cafeteria it’s not of obvious use in planning new snack food releases or whatnot); but, at a minimum, the schools probably need some usage data unless they want to just forego all cash and ‘USDA Foods’ in-kind reimbursements provided by the USDA under the National School Lunch, Special Milk; and School Breakfast programs.

It also wouldn’t be terribly surprising or unreasonable if someone lower in the chain wanted at least modestly detailed records to track popularity or unpopularity of various options, make sure that the meals actually being served are, at least on average, actually being eaten; determine the appropriate ratios of meals to students for planning purposes; and that sort of thing.

My (layman’s) understanding is that the feds only care about the breakdown between paid/free/reduced price (as defined by their eligibility requirements for reimbursement rates; so presumably unaffected by California’s decision to treat them all identically at point of sale); so you wouldn’t need individualized data, just enough to know how many meals can be reimbursed out of each bucket; and the utilization data could be even coarser, but there is definitely some incentive to collect it; hopefully discarding as much as those purposes allow as soon as possible.

why collect that data in the first place

surely they must be punished /s