Car Wars: a dystopian science fiction story about the nightmare of self-driving cars

So not the dystopian game about armed and armored personal transport?

Came for the Steve Jackson Games, was not disappointed! Except I don’t think he foresaw autonomous cars.

No one sees them coming. Or hears them since they’re often electric. They’re sly like that.

Came for the Steve Jackson Games, was not disappointed! Except I don’t think he foresaw autonomous cars.

People hacking computer systems, on the other hand…

I wrote a short story about this in High School.

The plot was, a family gets in their car for a long drive on vacation. In the future, the car system is all automated. The problem is, that occasionally there are glitches in the system, or a random event that causes large pile up wrecks, usually resulting in fatalities.

So the father of the group has a program installed on his computer he isn’t supposed to have. It basically takes all the known variables and gives a forecast on how unlikely one of these major pileups are supposed to happen. He discovers that there is a 90% chance of his car being ensnared in one of these pile ups, and if so a 100% chance for at least one fatality.

So from there on it is one of those morality plays. The problem is, once you are locked in and in the system, you can’t deviate until your destination. One could alter the car to take over manual control, but doing so would result in another pile up, most likely greater than the one originally forecasted. So does one accept fate and hope the 10% chance pans out, or do you control your own fate, saving your loved ones but dooming strangers? (This is why the software he used was not allowed.)

IIRC I wrote endings to both - but I ended up leaving it open to the reader what happens.

But really, self driving cars are the future, and it will make everyone more safe on the highway.

But really, self driving cars are the future, and it will make everyone more safe on the highway.

The stupid thing about the trolley problem is that it doesn’t arise for human drivers because they do not have time to react rationally - just describing the decision to be made takes longer than braking would at reasonable speeds.

Cory, I really enjoyed reading that, a great story.

Thats true. For sure self driving cars will still get into some accidents and cause some deaths, such as a tire failing at high speeds, or hitting a deer. But once they are more or less perfected, they will be much safer than human drivers. The “trolley scenario” is going to be few and far between and even if and when it happens it is going to average out to less deaths than by people. 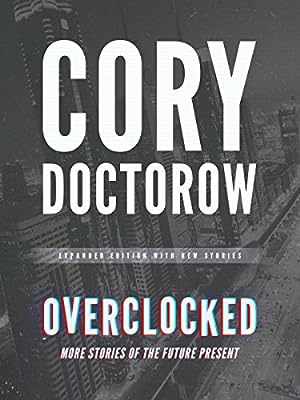 Now available for the first time with two additional stories! Have you ever wondered what it's like to live through a bioweapon attack or to have every aspect of your life governed by invisible ants? ...

once they are more or less perfected

That’ll never happen. There will be a point where they’re better than the average driver (soon), but then a perpetual cycle of upgrades as they constantly, slightly improve safety. Planned obsolescence is the only way they’ll sell cars, after all, given that autonomous vehicles will kill private car ownership for most of the world.

given that autonomous vehicles will kill private car ownership for most of the world.

…in possibly fifty years. In any case, autonomous vehicles are merely a short term stopgap before connected vehicles, just as, as soon as the railways started to develop beyond point to point lines, the method of control went from the driver to the signal system. Once you have connected vehicles, it is the system that gets upgraded not the vehicles.

I worry about the 30,000+ US citizens who will survive each year if self driving cars virtually illuminate accidents. That’s a lot of extra folk still alive to drive up the nation’s population.

Why would it kill private ownership? And cars wear out over time, even if they last longer than they did 30 or 40 years ago.

Perfected is a bad word. What ever word for, “Safer than human drivers, and safe enough for everyone to use.”

Which way does their voting skew?

What? Self-driving cars will stop in front of accidents with their headlights almost on?

And cars wear out over time

This is an interesting point. Most cars are very underutilised, which is just as well because typical car engines are designed for only about 2000 hours between major overhauls (a marine Diesel laughs at such puny numbers.)
Efficiently used self driving cars would result in one of two options: a short life (perhaps two years) and efficient recycling, or for cars to become much more designed for longevity than they are now - back to low power durable engines, easily replaced wearing parts like seating, and corrosion resistant materials. With fewer collisions, aluminum would become much more attractive as a skin and structural member. Cars could become, in fact, more like very small buses or trains. My guess, though, is the former with a move away from designing in durability and towards ease of recycling - like phones. A short replacement cycle would be the favoured option of the car industry, and would solve the problem of keeping older hardware off the roads.
The question is, what would replace cars as visible signs of wealth? It’s cars that have largely replaced clothes as status symbols (for men): in the 1970s I wouldn’t have been seen out in London in anything but a bespoke suit, now CEOs wear jeans and T-shirts. Perhaps we’ll go back to clothes again.
It could all be extremely interesting.

I wasn’t really thinking of 100% lack of private ownership, but more the majority of the market. In rural areas, automobile ownership will doubtlessly hang on for a very long time - a private car would be an aspect of rural life like having a tractor. In urban areas, though, it’ll happen really quickly - and the denser the urban area, the more quickly it’ll happen. Some European countries are already planning on urban dwellers not owning cars. I expect we’ll see an explosion of different sorts of autonomous vehicles pretty quickly, too - buses that dynamically change their routes to match where riders are and their destinations, for example. Yeah, eventually control schemes will switch - but that could take a while.

Why would it kill private ownership?

If you live in any sort of urban area, why pay to own a car, which spends most of the time sitting in a parking lot, needs maintenance and a parking spot, when you can simply call a car whenever you need one for a lot less money and hassle (e.g. let the car service worry about maintaining it)? Car manufacturers are bracing themselves to sell a lot fewer cars when autonomous vehicles take off because so many fewer would be needed to convey the same number of people if they can simply go where needed at any given time. Although they’ll wear out, electric vehicles - and they will largely be electric - should be more dependable (fewer moving parts), and privately owned vehicles in wealthy nations are often replaced more for reasons of fashion than necessity.

I suspect that will be true. They’re going to largely be electric cars, so battery replacement and recycling will be common, and I suspect cars may be designed with more easily removable components that can be easily replaced and recycled as needed. Car makers may move towards operating car services themselves, even, constantly upgrading individual vehicles.

what would replace cars as visible signs of wealth?

I think you’re right - clothing, jewelry, and also grooming - elaborate hair, nails, make-up that indicate an expenditure of money on human labor. Those have no ceiling in terms of the wealth that can be on display - some people already own and wear millions of dollars worth of jewelry.