From experience, all pans, non stick or not, will be worthless once you cook with anything involving oil. Margarine, Pam, and kind of oil. It heats up and becomes a gummy substance that will stick to anything, including non-stick surfaces. And it’s impossible to remove. I’ve tried everything from brake cleaner, gumout, steel wool, blow torch - you name it. Cooking oil is not formulated for heat like motor oil is, unfortunately.

This sounds absolutely bizarre to me. I’ve never had an issue removing oil from a pan with just a bit of dish soap and hot water. I’m not even sure why you would use a blow torch to try to remove oil.

The @frauenfelder household must be packed floor to ceiling with useful stuff.

sorry. After an endless string of non-stick pans we replaced all with cast iron and never looked back.

I recently started using a 9" Carbon Steel pan. It needs to be seasoned like cast iron, but is much lighter weight. It’s my go-to for eggs, and most things actually. It does need some fat to cook non-stick, but that doesn’t bother me. Also no fear of Chemical leakage.

In regards to teflon (PTFE) off gassing: it only occurs at very high temperatures, like 500+ degF or more (depending on the exact chemistry).

That’s why they always recommend that you heat your teflon pans with some oil already in them because the smoke point of almost all oils is a lot lower than the teflon off gassing temperature. So if your oil is smoking, it’s a good visual notice that your pan is too hot (but still safe), and you should move it off the heat.

And yeah, no teflon pan lasts forever. That’s why I recommend buying the mid-price pans. Not the cheapest stuff because it won’t heat evenly, but not the most expensive stuff because you’ll end up having to throw out the pan after a few years no matter how much you spent.

Meyer Corporation is a cookware distributor based in Vallejo, California, United States, whose parent company is Hong Kong based Meyer Manufacturing Co. Ltd. It is the largest cookware distributor in the United States and second largest in the world. The company was founded in 1981. Cookware labels or lines for which Meyer is the parent firm include Circulon, Anolon, the now defunct Steelon range, NapaStyle, SilverStone (under license from DuPont), Rachael Ray, Paula Deen, Cake Boss, Ruffoni, Th...

That’s the best I’ve ever owned (count is about 10ish, I think), and the first I own which is dishwasher-safe. And, yes, made in the US.

Absolutely. My point was it’s not necessarily leaching anything into your food.

Worst case scenario the health concerns have to do with fumes.

The ceramic non PTFE coatings I’m pretty sure there isn’t even any of that going on.

We are trying out a new pot - all glazed ceramic, from the 70s under the brand Frost & Flame. You can find them on eBay.

Toss Out Your Nonstick Skillet

After a single use? Sure, wash it with water. Want to bake dozens of cookies and don’t feel like washing your non-stick cookie sheet between batches? The oil, after repeated firings, turns to lacquer which can’t be removed. Here is a photo of my cookie sheet. 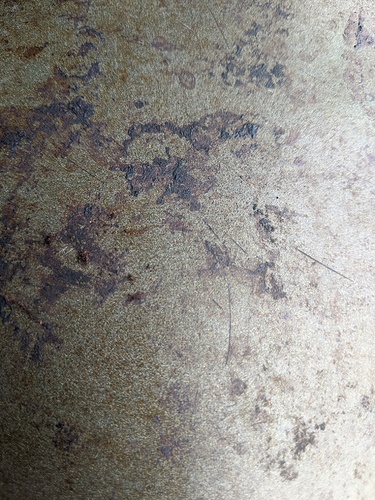 Notice the cut marks in the surface? That’s from me trying to scrape off the lacquer. A blow torch heats the lacquer enough to get it somewhat pliable and you can remove some of it (not all).

It doesn’t happen with standard steel and aluminum sheet pans.

And if your cleaning skillets and pots i’ve never much seen it. It’s also exactly what you want on cast iron and carbon steel. Including carbon steel sheet pans (which are hard to find these days but were awesome back in the day).

As for getting rid of it, I have no idea why you’d jump to brake cleaner and blow torches when oven cleaner exists specifically to remove this sort of thing.

If you need to preserve a non-stick coating soaking with baking soda also works. And there’s a whole host of mild caustic cleaners with abrasives like Bon Ami and Barkeeper’s Friend. Or even just dishwasher tabs.

But this sort of thing is exactly why non-stick bakeware is a bad idea. That’s what parchment and Silpat matts are for. Those scratches mean your non-stick coating is gone, and it’s probably only building up to that level because you “don’t feel like” washing your cookie sheets between uses. That build up is probably just as much carbonized cookie shmutz as it is polymerized oil.

I have one cheap, non-stick cookie sheet. Purchased in a pinch. While it has some darkening and oil residue it has no chunks or rough residue. Because I clean it. And this is mostly not an issue on any of our other cookware (barring carbon build up on the exterior of our cast iron, owing to continued use for many decades). 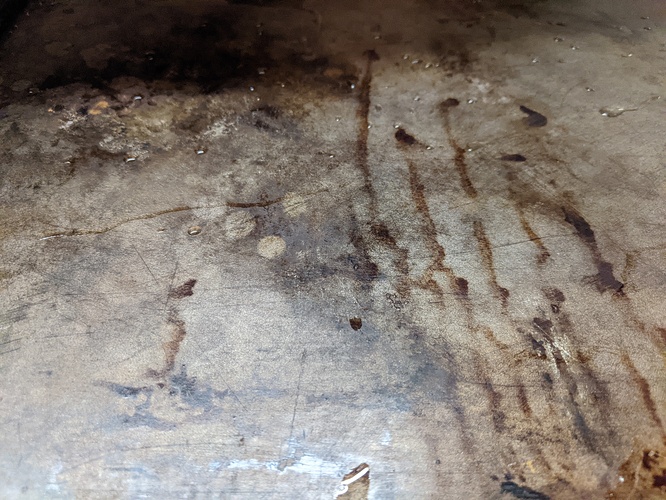 I see I was spot on with the “if it doesn’t happen to me then you’re doing it wrong” guess. I’m sure you’re in the “it’s cold here so global warming is fake” camp too.

Huh like I didn’t know there were other ways to clean pots. Derp. And no, it’s not dried on cookies, it’s actual lacquer, which hardens like, um, how to put it…OH…lacquer! But what do I know, I only have the pans in hand. It’s always best to get advice FROIM THE INTERNET.

My eyes rolled so far back they did a backflip. Again, thanks for setting me straight. So glad this thread dies soon. This is 30 minutes of my life I’ll never get back. CHEERS!

Huh like I didn’t know there were other ways to clean pots.

You literally said nothing works. Referenced dangerous cleaners you really shouldn’t use on household items. And made vast generalization about all pans.

Or you can keep being nasty. Making ad hominem attacks. And refuse consider that people might have some useful advice for you.

Like not using fucking brake cleaner on food prep equipment.

I don’t want to maintain my shit.

Well, yeah, you should wash you cookie sheets. If you don’t want to wash them, maybe try doing things like: line the sheet with parchment paper. Give it a quick wipe off between batches. Using uncoated cookie sheets.

But after a few months… they always lose their nonstick abilities.

For what it’s worth, Cook’s Illustrated suggested a few years back that it was futile to try and find a non-stick pan that last a lifetime. In fact, they determined that none of the ones that they tested were durable for very long, so their suggestion was to purchase a relatively inexpensive T-fal 10 or 12 inch pan and just plan on replacing it regularly as the non-stick surface fails. It’s not particularly sound advice, environmentally, but I am on my third pan in 5 years using their advice, and I use the pan almost daily, though the last one I bought was an Oxo.

If something doesn’t happen for literally everyone

I’m not going to dive in deep, but you and @Ryuthrowsstuff should not pile on this user with absolutisms like “literally everyone”.

Non-nonstick baking sheets here, and some with enamel. Using parchment paper. And still, some spills happen, and are non-removable.