Every nonstick pan I’ve ever purchased seems to work great when new. But after a few months, even when special care is taken to not overheat or scratch them, they always lose their nonstick abilities. Then I feel a bit paranoid wondering how much of those nonstick chemicals I’ve ingested.

Maybe give us an update on 6mos if you use it regularly? I could use a durable nonstick pan (to complement my cast iron and Le Creuset stuff)

I bought one. Six months later the nonstick properties are basically kaput and there’s residue that won’t come off.

some kind of natural granite

Some trivial googling shows “granistone” is a pretty routine ceramic non stick coating. And the product page doesn’t even make a “natural” claim. The granite in the naming seems to refer to the pattern which is usually referred to as granite when it comes to cookware. As in Graniteware enameled steel pans.

There doesn’t appear to be any granite involved.

A bit more digging shows the manufacturer of the coating, ILAG an industrial chemical concern. Mostly ships Teflon based coatings, though not with the addative (PFOA) that leads to a lot of the issues with Teflon. But tries really hard to hide that their coatings are Teflon.

The pan maker lists it as a PFOA free coating from ILAG. So it’s probably Telfon on a ceramic enamel backing.

Made in China, like 99.9% of the frying pans you find for sale in stores. I’ve only found maybe 3 frying pans actually made in the USA. One from Calphalon, one from All-Clad and one from Zwilling.

It’s an older pun, but it checks out.

It wasn’t made with granite when Mark urged us to buy it last August, and it is still not. So, two strikes: one for falling for their marketing, and two for not reading comments about the products you recommend.

What this reminds me of is of some Korean stoneware for the kitchen. My mom loves cooking with hot stone bowls, she usually makes bibimbap but there are stews and other things you can make with them. The care for them is very particular, similar to how you’d want to treat cast iron, there is a curing and seasoning process for them that keeps them in good condition. They’re fabulous cooking implements, i recommend them if you want to wow some dinner guests with your cooking prowess 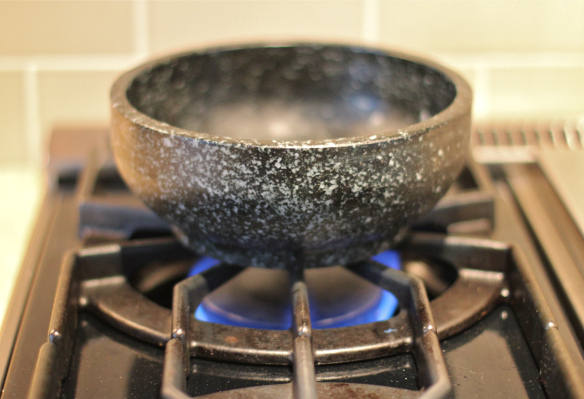 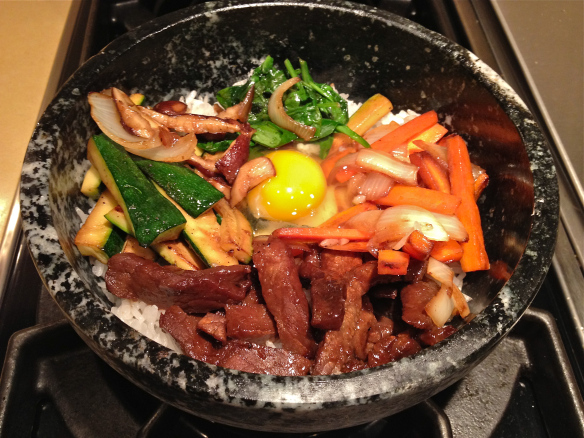 Similar experience here with a “ceramic” coated pan, worked fantastic for a few months. I still wonder what chemistry cooked off into our food.

The only thing we’ve tried, that has lasted, is Calphalon “metal utensil safe”… but I still don’t use or recommend metal utensils in them.

I got one in August and it still works like new. Best pan for eggs I’ve ever had.

Does it work with induction stoves?

Every nonstick pan I’ve ever purchased seems to work great when new. But after a few months, even when special care is taken to not overheat or scratch them, they always lose their nonstick abilities.

IKR every damn time. I’ve gone back to Teflon. Teflon pans last forever. I have an omelette pan since apt number one and it’s still doing great albeit some scratches, stove burn and a dent or three.

I appreciate the pun name but that’s about it. I only own one non-stick pan which I only take out very seldomly. I prefer uncoated stainless steel.

I guess I don’t expect a hive mind at Happy Mutant HQ but it seems like affiliate links to Amazon would be something the collective could agree on. But for I know, the site is running on AWS…

Silverstone with a bolt through metal handle or go home.

Don’t ever put water in it though, salt’s fine.

That’s a common complaint about ceramic non-stick. From what I understand the coating breaks down in place, rather than ending up in your food. Even Teflon apparently off gases unless it’s flaking.

Does it work with induction stoves?

Calphalon only makes aluminum non-stick. So no.

Aside from scratching the coating breaks down with time. It’s just the chemistry of how these coatings work. I’ve never really had a non-stick pan of any sort last longer than like 3 years. No matter how careful I am. Though I am a particularly heavy home cook.

Once these things are scratched it’s usually best to replace them. A scratched coating, Teflon or not. Can flake off into food. And the more underlying material get’s exposed the stickier the pan gets.

I cook for a hobby but I have a large inventory of cooking equipment. My frying pans range from cast iron to calpalon (quasi cast iron) to regular non-stick pans.

From experience, all pans, non stick or not, will be worthless once you cook with anything involving oil. Margarine, Pam, and kind of oil. It heats up and becomes a gummy substance that will stick to anything, including non-stick surfaces. And it’s impossible to remove. I’ve tried everything from brake cleaner, gumout, steel wool, blow torch - you name it. Cooking oil is not formulated for heat like motor oil is, unfortunately.

Also note, even the best pan makers out there will admit that the non-stick surfaces only have a lifetime of 5-8 years, even with the most gentle of use. It’s just how they are. If you want there are some makers that have lifetime replacement, so you can always just return it after 5 years (or less if you cook with oil).

Lasted longer than any ceramic pan I’ve owned so far.

That I don’t doubt.

I’ve seen one of those lose it’s slick after one use.