Gormless “how come we can’t” question: stamp every catalytic converter with a notably hard to efface serial number, which is entered in some database alongside the vehicle’s VIN. Then when a car is listed as having its catalytic converter stolen complicit resellers of such stolen property will be far more easily identified (and hopefully indicted) and the market for such will eventually turn sour. (“You ignorant @#$% you! They’ll just ship them to China where they’ll be melted down and made into new ones, won’t they!?”)

Just had my 2007 Prius cat stolen in September… they took 2 other pre-2010 Japanese cars a few blocks away… so I looked at this and it’s like “2000’s Honda, yep.” Apparently they also like trucks for this because the ground clearance doesn’t need a jack. Replacement was $3500… because my NY/Vermont Prius has California emissions… In other news, the book value of a 2007 Prius is still more than $4500.

Yep, they’re going for the platinum and palladium content, and they focus on the cars with more of that.

2011 Prius currently in the shop for its third catalytic converter replacement in the past 2 years.

Everybody who gets one stolen should be allowed one free punch or kick on the perpetrator per incident.

as a late model KIA owner in the big city, just waiting to see which gets stolen first, the cat converter or the whole damn car.

Gormless “how come we can’t” question: stamp every catalytic converter with a notably hard to efface serial number, which is entered in some database alongside the vehicle’s VIN

The catalytic converters aren’t being resold intact. They are melted down for the platinum and other precious metals in them.

I lived in a neighbourhood in LA that was really bad for this. All of my neighbours had their cat stolen at least once. I was lucky to have a garage so my car never had to live outside. This video nails how quick they are. I’m embarrassed to say I was home when my neighbour across the street had his stolen while his car was parked in the street (right across from me) and I never heard or saw anything.

They stole one at my kids house earlier this year. They were in and out before you could really react.

Like Vladimir Putin, selfless humanitarians doing their best to accelerate the transition to electric cars /s

The thieves are particularly deplorable because, very often, they’re depriving a working-class person of their means of getting to their job and making an already precarious living (one that doesn’t allow for quick replacement of an auto part).* All for whatever deeply discounted price the fence gives them for a few grams of platinum.

[* you can drive a car without one, at least for a bit, but it’s a really bad idea to do so]

I’d just like to know how to get rid of a cat… The NC state laws seem to make it rather complicated. I had to replace the one on my 04 Corolla due to O2 sensor codes. The transmission failed in the car a few years later and now I have a different car with a sawed out cat still sitting in my garage.

A friend of mine drives a Tundra. Was staying at a hotel in CT; thieves hit the parking lot overnight and stole all the cats from all the Tundras in the lot, like five or six trucks. Apparently the Toyota 4x4s all have four catalytic converters, each. Their efficiency is kind of impressive. My friend’s trying to get his truck fixed but it’s going to be 3-6 months they can get the parts, so he’s kind of SOL. Apparently they cut though a bunch of other sensors and wiring.

But he’s still better off than one of the other guys whose truck was hit; the thieves cut through his fuel line, so when he hit his remote starter his truck caught on fire. Thankfully he had the remote starter so he wasn’t actually in the truck when it went up.

The police in NY have organized events and give out etching kits. I just got a flyer for one (2 weeks too late, I just got “harvested”) but will probably etch my new one, why not.

The problem is, as @VeronicaConnor points out, that only helps if the person seeing the etching cares. In general the thieves are turning a cat around for ~$100/pop, and aren’t melting them themselves, the Recyclers are. The police say that they have “promises” from the recyclers that they will report any etched cats to the police, but it’s all honor system. Even under normal conditions, we apparently only get about 50% of the needed metals from mines, the rest comes from recycling, so the market pressures are a little intense to allow recyclers to have much of a conscience about these things…

Everybody who gets one stolen should be allowed one free punch or kick on the perpetrator per incident.

I drove on the highway right after losing mine. Very bad acceleration, did not make friends with the other drivers, though I kept right and kept the flashers on. Noisy as hell too.

The police say that they have “promises” from the recyclers that they will report any etched cats to the police, but it’s all honor system

Yah, that never works. It’s the worst-kept secret in the automotive aftermarket that half the parts for sale are stolen. Nobody thinks about it or checks because the people selling the parts want the sale, and the people buying them need the parts. Nobody asks questions about where they came from (even if the recycler knew, which often they genuinely don’t anyway), 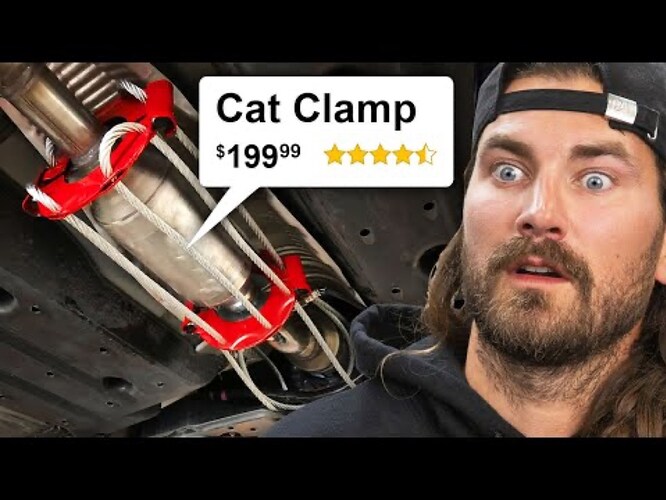 Rebar cage seemed to be the best/economical response (at the end of the video).
Until cat needs to be replaced.