Those appear to be nothing other than microcentrifuge tubes. You can get 500 of those for $13, so the markup involved in naming them “geocache containers” seems a bit high.

Mark - Preform soda bottles are nice if you want to leave something that’s not absurdly small. I’ve been caching with my kids since '09 and it remains great fun – and always a great distraction on a road trip. 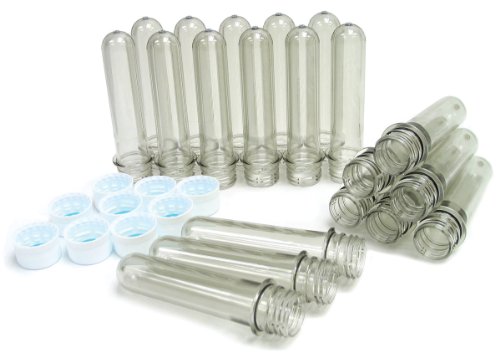 A box of 30 preforms and caps. All bottle caps may be used again and again. Cap color may vary. Caps fit all regular-sized plastic drink bottles from 20 oz. up to 2-liter., and our Soda Bottle Preform ...

It does seem pricey - but since Geocaching is a for-profit enterprise, it’s not terribly surprising.

We call those “DNA tubes”. They’re not well thought of. If you want to hide a small geocache, don’t go smaller than a small bison like this.

Speaking of expensive, funny how soda bottle preforms are more expensive than a complete soda bottle full of soda.

These little vessels can be bought in bulk and are seriously useful for small parts (think SMD salvages), small amounts of chemicals, and general storage of things too tiny to not be lost or to deserve a full-size small bottle. I bought a thousand on impulse some time ago, for about $10-15 or so. I should do more such purchases.

So the cost of these “cheap geocache containers” is rather staggeringly high.

Test tubes can also be used as small cheap storage vessels. For more sensitive stuff the soda-lime glass ones can even be sealed off as ampoules.

Still hard to put much in. The 50ml tubes are still super cheap compared to the ones in the post

Found waterproof metal pill containers for a buck too.

I really need to go geocaching with my daughter. I finally got a smart phone - though I haven’t swapped over to it yet, but it should have GPS and so we could go find some stuff around here.

Hmm - might get some of those Letter stamps and custom mark some spent .44 cases for those that have an item swap.

I personally think these containers are too small and are prone to turning the paper logbook into mush. I suggest going larger if possible. There are other benefits such as being able to swap items, trackables and so on. I know it’s easier to hide smaller caches, but it’s far more fun to find ones that actually contain something more than a tiny soggy rolled up piece of paper.

The best caches I’ve seen were in ammo cans. Comparatively pricey, yes, but big enough to be useful and very durable.

What’s wrong with quality Tupperware like containers? That is what I saw most things in when I went with friends once.

Nothing, really. They tend to be lighter colors, so hiding it may be more difficult.

And the can is made of metal, so it should take more abuse.

But I’ve also seen them in plastic and that’s fine.

The best caches I’ve seen were in ammo cans. Comparatively pricey, yes, but big enough to be useful and very durable.

The added cherry for the cake is that it can irritate people who dislike guns.

I got one since. But even then, for the 1+ mm thick metal they wear down rather fast. For such large holes, the drill-and-cut approach, with subsequent grinding using some bigger tool, could do the job better.

Ideal would be a microplasma. Or maybe an EDM cutter…

But even then, for the 1+ mm thick metal they wear down rather fast.

I just noticed that can was for a Ma Deuce. Good choice!