many see it as just another version of a pyramid scheme

Legitimate businesses don’t use pyramid selling because it is an obviously absurd way to sell something. Even scam products don’t use MLMs; they just blast everyone on instagram at once and take payments centrally.

MLM participants know the product is irrelevant and the business is a scam. It’s just a way of converting your relationships into cash, which is perfect if you’re “friends” with a bunch of other soccer moms, but really don’t mind if they end up never speaking to you again, because you don’t like your current life anyway.

There’s a lot of interesting politics involved in why MLMs remain legal, but like crypto, they wouldn’t be a thing in the first place without a population of desperate, alienated people to feed on.

I had to stop and check. It is, indeed, a bizarre yellow tongue-strip mlm. The whole mystery of its actual existence is just frosting on the terrible cake.

Seriously, wtf?! This is a classic scam, purposefully weeding out all but the most gullible marks.

I am obviously not their target

Because you’re thinking about the product, not the opportunity.

Instead, try thinking that you can “get in on the ground floor of this terrific opportunity!” That for once you’ll be the leader of the pack selling the hot new stuff to the other people in the neighborhood. It’s a “health” product that doesn’t have calories, so all your workout friends in yoga and the club will want to get in. You’ll even have a shared secret, which is an orange tongue that will be a sign to everyone in the know that “you’re in the in-group.” You’ll make money in your spare time. Other people will work for you! You can be your own boss, set your own hours!

Bored? Want to get out of the house once in a while, away from the kids? Need some extra spending money? Sign up now! You just have to buy the distributor initiation kit, which includes lawn signs, a box of engraved invitations, stickers, a party planner guide, a free distributor-only app, plus a starter set of 6 large boxes and 18 small boxes that are almost guaranteed to sell out in no time, and the profit from the sale will cover the entire cost of the distribution kit. So there’s almost no risk!

With enough misunderstanding and an enthusiastic salesperson pitching the product, there is a large segment of the population that will fall for this, every single time. That’s the target market.

It’s not a pyramid scheme. It’s a reverse funnel system.

Remember, the most important thing is being your own boss!

That thanks to Amway founder Richard DeVos’ cozy relationship with the Ford administration (well insulated by lots of cash, of course).

This is a particularly dumb one, but they’re all pyramid schemes in practise and structure whatever the law classifies them as.

I have an acquaintance who used to fall for these MLM scams. She got into 3 or 4 of them over a 3 year period. She must have wised up because she hasn’t posted about one in years. She’s also kind of a religious nut. I wonder what the overlap there is.

“at least 70% of all goods sold must be purchased by non-distributors.”

These can’t both be true, which means MLMs are probably reclassifying all the purchases made by downstream distributors as “startup costs” instead of sales or something. If 70% of goods sold were not to other distributors, then 99% of people would not be losing money, unless somehow 1% of people sell huge amounts of product to consumers. As in, enough to sustain a multi-billion dollar company like Herbalife. If so, let’s see those people, because I don’t think they exist. It’s a clear end-run around the FTC and one more reason I can’t believe MLMs are still legal. It’s such a transparent scam.

Not to defend these scammers, but the fact that the company won’t sell directly to the public does not in any way imply that only distributors are buying. There are plenty of legitimate business that sell only through third parties, in order to support their distribution network.

Again, I’m not saying that this outfit aren’t scammers. They’re clearly scammers operating a pyramid scheme. I’m just saying we shouldn’t include demonstrably false statements in essays criticizing them, since the company can easily seize on those and pretend it debunks the whole argument.

They work ok if what you’re selling is drugs. 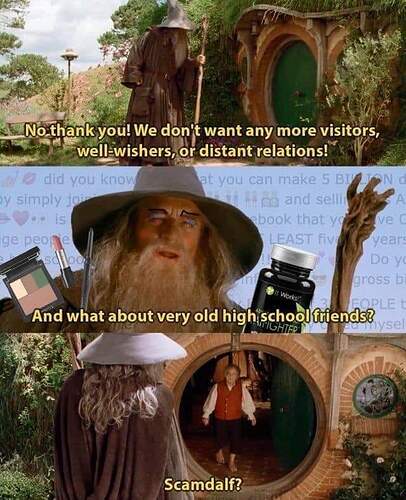