All your seabed are belong to us!

Big deal, it’s already been done in Minecraft, like, a million times.

Mr. President, we must not allow an undersea gap!

We’ve got our best man on it.

I’d be more worried about Namor.

So far there are few public details, including a specific time line, any blueprints or a cost estimate – or where in the waterway it might be located.

There’s a steady stream of plans coming out of China, Russia and the European Space Agency for manned Lunar and Mars missions, solar power satellites, space shuttles and whatnot. They get reported as “THIS IS WHAT THEY’RE DOING!!!.”

But plans are not the same as funded plans. Usually they’re what some industry or government official is lobbying for, nothing more. I doubt that this is any different.

We’re about due for yet another announcement for Russian or Chinese grand plans for a railroad connecting Asia to North America. (Russian entrepreneur shares his plan. A plan that includes “and then a miracle happens, and someone ELSE funds it.” But he asks the Russian government for permission. The Russian government says, “Um, yeah. OK. Let us know how it turns out.” And it gets reported as “RUSSIAN GOVERNMENT GREEN-LIGHTS RUSSIA-TO-US-RAIL LINK!!!”)

That scene looks wonderful at first glance. The big bubbles were full of air, with force field doors that kept the water out.

Then you notice the folks walking normally and talking to each other outside the bubbles.

They are going to call it “Rapture” and Paul Ryan will finally get his chance to live out all those wonderful Ayn Rand stories. It’ll be grand! 'scuze me while I tool up a bit of the old Adam, mmmmmmm, yessssss…

(and now for a bombastic and ridiculous 90 page monologue/rant)

I think the bubbles are inside a bigger dome. But there’s nothing that will force me to watch that movie again to check.

Not even if they turned it into a musical? 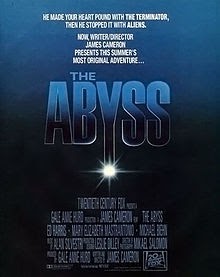 If The Terminator (1984) unequivocally established James Cameron's chops as a director of intense action and emotional stories and Aliens ...