That’s awful! So how am I supposed to get pee all over my clothes now?

A small high voltage generator connected to the wall will act as a better deterrent and will last longer. The electric fence kind will do a good job.

A friend’s neighbour did this. Round my hometown a lot of semi-detached houses have a tunnel down the middle to the rear of the house, called variously a ‘ginnel’, a ‘jitty’ or ‘chitty’ amongst other terms (all of which may or may not also apply to alleys, passageways or cut-throughs), and being near a local pub, a lot of people took to relieving themselves down this conveniently secluded route. Until the aforementioned neighbour attached a large piece of corrugated iron to a battery and propped it up down the ginnel.

Once again, we go after the effect, rather than the CAUSE.

Spend the money on public restrooms if you don"t want the public pissing in public.

What?? That would mean spending money on the riff-raff, when you could punish them instead!

“which is supposed to deter wall-pissing by making the urine spray back all over the pee-er.”

Having public sanitation stations available to every citizen.

Spend the money on public restrooms if you don"t want the public pissing in public.

Go look up the history of trying to provide public toilets in SF and Portland.

Short version: They’ll need to be staffed, to keep them from being used as shooting galleries, flop houses, and prostitution venues.

Ok, then you get sensible gun regulation, legalize prostitution and build better homeless / temporary shepters and improve drug treatment and mental health care. No matter which way you cut it, it’s a short-sighted and immature solution.

Hey, aiming accurately is a virtue in a restroom, public or otherwise.

On a side note I hoped “reflective” meant it would change color when urinated on, but I’m not sure what purpose that would serve, other than to encourage a whole new form of graffiti.

Nobody tested this paint before they bought it?

Who wouldn’t want that on their CV - “Certified Urinator”?

On a side note I hoped “reflective” meant it would change color when urinated on, but I’m not sure what purpose that would serve, other than to encourage a whole new form of graffiti. 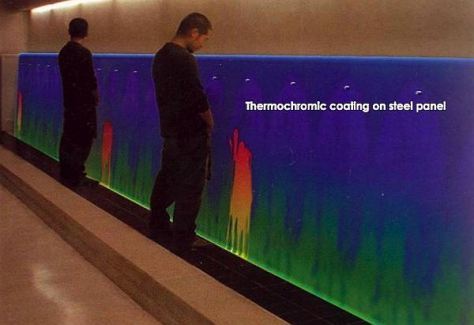 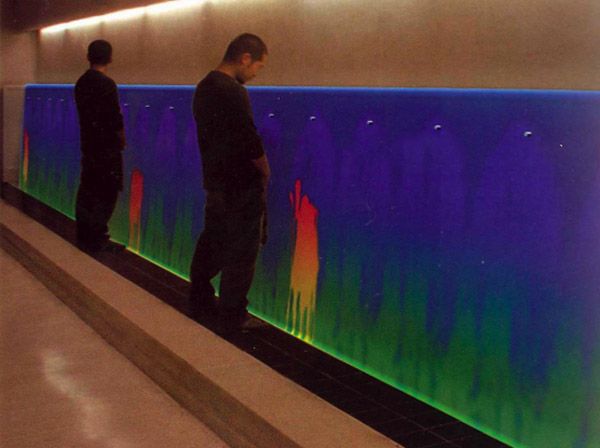 The thermochromic urinal is making quite a stir in the web news world. No one really knows who created and designed this innovative and bizarre waste disposal system. The wall in the picture clearly demonstrates how this unusual system works. The..

Whoa!! I wonder how durable and how toxic it is, since the first thing I thought of was using it on some metal instruments of mine.

metal instruments of mine

Whoa!! I wonder how durable and how toxic it is, since the first thing I thought of was using it on some metal instruments of mine.

Toxic, I would say “not much”. It’s usually some cholesterol esters mixture.

Durable, these things are fairly sensitive. They degrade with elevated temperature and with ultraviolet light. A good robust clear coat with UV filter should prolong their service life significantly. What kind of duty would your application require from the coating?

Ah, I see. If they are sensitive then definitely not gonna even think about it–a normal person who plays an instrument regularly can eat through lacquer easily, and I’ve met people that can degrade epoxy with their fingers

I have a couple of big, solid, brass pipes (I’m looking at you, @SpunkyTWS) that would look amazing with that kind of finish, but if it is delicate (2C-30C, irregular ph, no guarantees on UV) then it won’t work. But I appreciate the inspiration.

I searched for prices and found[0] this article - about 500 € for 6 m². The OP here claims it need’s to recoated yearly, now we only need the covered area in SF.

[0] The web is weird: An Australian news site gives me infos about a German project I use for posting in an US forum : )

It’s a cool paint, though. Try it out on something smaller (black undercoat, liquid crystal paint, clearcoat) and get familiar with its behavior. Then decide if it is robust enough for the full-scale application.

30 'C doesn’t sound as too high for me. A strip of the thermochromic foil I had attached to my tea mug lasted some occasional up-to-80…90’C cycling in an indoor duty for over a year before gradually becoming unresponsive black.

Worst case, the paint would need to be stripped after a year or three and reapplied.