Comparing a high-quality Rolex knockoff with a real one

There appears to be a whole cultural thing around having the “best” fake Rolexes as well.

I was at a corporate Xmas party for my wife about 10 years ago and 2 guys were in a corner having a very animated conversation. I moved closer so I could eavesdrop as I was really bored.

They were comparing their watches.
Their FAKE Rolex watches.
Each guy was trying to convince the other that his was “better” because it was cheaper or the back story of how they got it was better or there was some tiny little difference that the other watch did not have, or how it is actually BETTER than a “real” Rolex because of this or that.

Reminds me of the Alex cartoon. “Why are you wearing that bogus rolex? It’s such an obvious fake!” “Because then people will know that I’ve been to Singapore!” …in fact it beats me why people buy watches these days - apart, you know, from showing off. I can’t bear metal on my wrist - chrome brings me out on a rash - so for a time I had a fob watch …until I lost it. Why continue with wristwatches? How often are you going to be asked to “go over the top” with a pistol in your other hand? Oh wait. This is an American forum. Forget I asked.

We don’t all have pistols you know!

Some of us use assault rifles…

Seems like it’d be more fun to see a comparison between the real McCoy and a low-quality knockoff.

That video was all about why people buy the real thing. Saving up for it made him feel good. Seeing the fake on his wrist made him feel bad. This guy is very emotionally invested in the brand. Even in his review he’s talking about platinum dusting inside of the lettering bringing him joy, unlike the darker colored paint that left him feeling flat.

I think he’s also freaking out a bit because in one or two more revisions the fakes will be even harder to spot for even the experts. His job is getting very very difficult very quickly.

Two watches, one a real Submariner. That advertises on the watch face the ability to survive 1000 feet of water. If only there were some way to see which is the real one…

But the video leaves us high and dry.

They weren’t made on Mars from unobtanium.

Eventually the clones will get so good that identifying fakes will transition from a state problem to a path problem.

One of these three watches is a real Rolex costing 10,000. Another is an imitation costing 1000. The other is a smart watch that costs < 500. Not only can the smartwatch do a lot more than just tell time, it also has the benefit of saving the wearer from the guillotine.

It was about 15 years ago my boss came back from a trip to China with a Rolex that had a sweep second hand. We were pretty impressed, not that many of us knew what a real Rolex was.

one a real Submariner.

I would imagine none of the luxury “dive” watches ever get close to water.

But I know quite a few military pilots, they are absolutely 100% using $50k, mechanical aviator’s chronograph watches. Absolutely. True story. Its a thing. Can’t do the job without an integrated mini sextant in the bezel crusted with diamonds. No way.

There appears to be a whole cultural thing around having the “best” fake Rolexes as well.

I have a few friends and family members who are watch enthusiasts (or would like to be shits expensive). The fakes seem to hold an important aspirational spot in the scene.

And there are people who specifically collect fakes or are enthusiasts for fakes. And they are a hell of a lot more fun as people. Had a boss who was into that a few years ago. He gave me a very good looking “fugazi” self winder that keeps horrible time for Christmas one year. Looks good with a suit.

I would be more entertained by a played straight video comparing a $10,000 Rolex to one a guy drew on his wrist in Sharpie.

ETA I know this video wasn’t created to entertain me. I’m just saying…

Having a watch can be nice. If you have to make a lot of appointments it is nice not to have to pull out your phone all the time. In particular I like having a watch when I am camping as the battery lasts months (or years) where as my phone is going to be dead in a day or so. Now I have no reason, or really desire, to have such an expensive watch.

The real ones have serial numbers registered at Rolex.

Been a watch enthusiast since I was a kid but I haven’t bought anything in a long time. Prices have skyrocketed all around for the most part. Last time I bought something was a DateJust made in my birth year - I’m hella old - that had been serviced by Rolex in LA. This was only like a half dozen years or so ago and even in that time on the secondary market they’re going for up to 3 time what I paid for it. I could never sell it, tho. Same applies to my vintage Speedmaster I’ve had for 20 years.

You’re right, but he started it talking about a previous comparison of the Submariner model and its fake, and my eyes likely glazed over. Still think that seemed an easier test than taking them round the race track at Daytona and crashing both to see which survives. 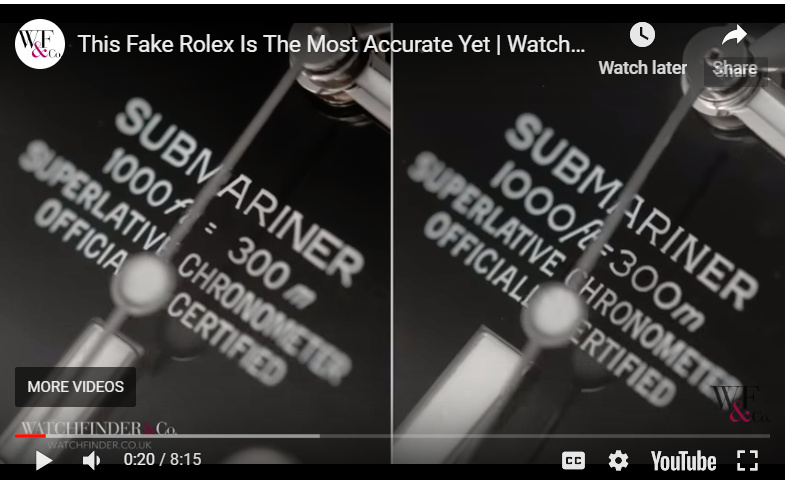 I bet those are very difficult to fake.

In other jewelry fakes, you can just weigh them, and I wonder if that would work with watches - the little cheats and corner cutting adds up to a difference in weight.