Could CIA torture report open the U.S. to prosecution in the International Criminal Court?

The ICC is non-binding and non-enforcable. The US, like many other nations, must accept the verdict and jurisdiction on each individual case brought forward against it.

If the US is charged in the ICC for torture (or any other nation/state is, for that matter), that nation/state can choose to reject the case and then it would not be held.

Plus, it seems like all the ICC is used for is picking on Africans.

The International Criminal Court (ICC or ICCt) is an intergovernmental organization and international tribunal that sits in The Hague in the Netherlands. The ICC has the jurisdiction to prosecute individuals for the international crimes of genocide, crimes against humanity, and war crimes. The ICC is intended to complement existing national judicial systems and it may therefore only exercise its jurisdiction when certain conditions are met, such as when national courts are unwilling or unable Th...

When a court shows that it’s only interested in going after those less powerful, and will ignore crimes by those more powerful, it shows that it lacks any moral credibility.

We’re seeing this with the regular courts in America.

The point, the article states, is not to seek prosecution, it has no mandate for that. If found guilty, the ICC would recommend the USA use its own legal system to carry out the prosecutions.
Failure to do so in the case of a guilty verdict would look very, very bad in the eyes of the International Community.

Can anyone really imagine this happening?

Wouldn’t this be the absolutely most surprising and gripping TV, like, fucking ever?

GET A FIRE GOIN’!

The ICC is non-binding and non-enforcable. The US, like many other nations, must accept the verdict and jurisdiction on each individual case brought forward against it.

The ICC is binding on the countries that have ratified the statute, and no one else. Due to current disparities in military spending, nothing that the current US government does not approve of is enforceable against the US.

Non-signatory states can still refer cases to the court, should they feel the need to do so. I don’t think they get to officially pick whether to accept the verdict or not. Of course, if a powerful country voluntarily refers a case and then ignores the court’s decisions anyway, it again depends on who has physical custody of the alleged war criminal.

The ICC is supposed to only act when local courts are unwilling or unable to handle the crime. If the US was a party to the ICC, the non-persecution of the torturers would be a clear case of unwillingness. But it’s not a party.

The point, the article states, is not to seek prosecution, it has no mandate for that. If found guilty, the ICC would recommend the USA use its own legal system to carry out the prosecutions.

They wouldn’t be “found guilty”, because they can’t even be indicted. But saying “here’s who we would prosecute first if the US had ratified the treaty” can still be a powerful political statement that might boost the court’s credibility and get the local courts to act.

As for “picking on Africans”, what did we expect?

Public domainPublic domainfalsefalse This image is a derivative work of the following images:

We’re looking for countries that

So basically, there are various African conflicts, and a few thousand soldiers that countries under ICC jurisdiction contributed to various US-led operations. Which are traditionally quite clean compared to African civil wars.

From the start, the idea was that the court would first prosecute a few criminals in Africa and be a positive force there, so that by the time war crimes happened again in a more powerful country, the court would have the required credibility to take that on. In 1998, no one expected there to be any American war criminals to persecute for the foreseeable future.

What’s going to happen when more and more countries start releasing their own torture reports?

Still too early to pick up a pattern, but maybe it will be something like this:

“I’m ashamed to admit that the previous administration (those bastards!) tortured people. It was terribly wrong, but now we must forgive them and move forward. Of course nobody will ever be tortured again, pinky swear!”

Still too early to pick up a pattern, but maybe it will be something like this:

“I’m ashamed to admit that the previous administration (those bastards!) tortured people. It was terribly wrong, but now we must forgive them and move forward. Of course nobody will ever be tortured again, pinky swear!”

“I’m ashamed to admit that the previous administration (those bastards!) tortured people. It was terribly wrong, but those people are still too well-connected inside my country. We can’t do anything about them, it would be political suicide. Please put some pressure on my country from the outside, that would help a lot. And it would be great if I could put some of my opponents in prison before the next election.”

Given that “a belief that we need to look forward as opposed to looking backwards.” is an official, Nobel Laureate Approved, position, I’m not going to get my hopes up…

Thanks for the details, I might be confusing things here, but if the ICC found against Americans and the US chose not to prosecute them in domestic courts, aren’t any signatory states obliged to hand over people for trial at the ICC should they enter their jurisdiction?

The real question is whether America will use American courts to go after torturers. I believe the answer to that question is no, but I’d really like to see Congress decide at least that the people who lied to their faces should have some kind of consequence.

Didn’t the report say that about a quarter of the countries on Earth were in on this? I hope we get some of our own prosecuting done.

Please please investigate the illegal torture of people at the hands of my overlords. I don’t wanna be next.

So the torturers who did the torturing in secret prisons in Europe could be indicted if the court felt that the national court systems (in Europe) were unwilling and unable to prosecute.

If, for example, the Polish government decided to come clean about secret prisons, the ICC would not be involved, and Poland could prosecute American citizens alongside their Polish colleagues. As long as the Polish government keeps things secret, the ICC could try to investigate and indict both Poles and Americans who committed crimes in Poland. IF they managed to find any proof against individuals without full cooperation from Poland, which I consider unlikely.

I don’t know anything concrete about how extradition to the court is supposed to work. This is a far too detailed source for me: http://scholarship.law.berkeley.edu/cgi/viewcontent.cgi?article=1072&context=bjcl
Apparently, there are a few rotten compromises and inaccurate wordings involved, and it is not quite clear what the extradition procedures should be.

I doubt it would work much better than extradition currently works.
Robert Seldon Lady, a former CIA agent convicted and sentenced (by Italian courts) to 9 years in prison for the 2003 kidnapping of Abu Omar in Milan, Italy, is still on the run. He was detained in Panama last year on an Interpol arrest warrant, but released the next day due to lack of an extradition treaty.

I would so love the New World Order to be real so that we could prosecute these and other war crimes.

Congress doesn’t need to decide that. Obama and Holder already did it for them in 2009.

The director of the ACLU says that Obama should preemptively pardon everyone involved. 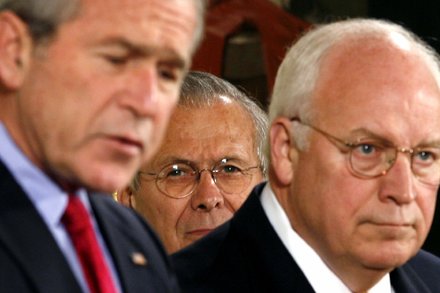 Opinion | Pardon Bush and Those Who Tortured

It’s the last hope of accountability for abuses in the war on terror.

Doesn’t congress have it’s own power to define and punish international crimes, completely aside from the courts? I know everyone has basically been let off the hook by the actual court system, but it’s actually never too late for state endorsed torture and other such crimes. People are still looking for Nazis (fuck Godwin, we are talking about an actually comparable here).

Not retroactively. That’s unconstitutional. They can only be subject to current law, but current law should be sufficient. When the Geneva Conventions were signed and ratified, they became part of the Constitution and Congress at that time passed legislation to enforce their provisions. Obama and Holder have chosen not to apply the law. If they did, the argument would then be over whether the commander in chief clause gives the President the power to set aside the law in the interests of national security. It isn’t clear to me how that would come out in this court but a previous Supreme Court decided Nixon was not above the law. Congress generally has the power to conduct investigations in furtherance of its legislative power but not criminal investigations.

Obama and Holder have chosen not to apply the law. If they did, the argument would then be over whether the commander in chief clause gives the President the power to set aside the law in the interests of national security.

I’d argue, if it were me to do the arguing, that it makes no sense to ascribe this power to the president. The president has the power to pardon, so he hardly needs another special power to circumvent the law. If Obama wants to pardon those involved in torture, let’s see him actually pardon them. Until that happens I think it’s a difficult case to make that they are off the hook.