Could the Game of Thrones poisoning happen in real life?

Isn’t a lot of what we perceive to be “taste” largely comprised of smell? I thought that human critters could discern thousands of different smells, but only a few different tastes.

Two of my friends witnessed the courtroom suicide mentioned in the article. It happened very quickly, and the guy took so much cyanide that if anyone had tried to give him mouth to mouth they would have died as well. It’s really quick stuff, and I gather that it went down somewhat similarly to the Joffrey poisoning.

Which Joffrey death are we up to in the TV series? I have only done the books and season one of the TV so far.

On one hand I feel kind of bad for Joffery. . . he was clearly very poorly parented and if he were any more inbred he’d be a sandwich.

Wouldn’t FOOF blow you up or burn you to charcoal long before it poisons you?

Now, poisoning by hydrofluoric acid, from what I hear, is especially exquisite…

If there are, the CIA and FSB will never tell. . .at least with that much effect in such a small time.

On the other hand, if such an assassination poison existed, we’d probably remember it’s use. . .

Maybe someone in Westeros has dabbled in ricin, or thallium, or polonium…

From “Rogue”, by Michael Z. Williamson:

He pointed to a desk set up as a collection and monitor point and said, “We found this halfway across the room. It’s mostly intact. I’m calling that the murder weapon for now. You’ll need gloves or. . . .” He grabbed a pair of tongs, grasped the item and handed it over.Silver took it, raised her eyebrows, and carefully passed it over.I examined the projectile. It was just crude enough to indicate it was custom made, but of sufficient quality to be professional. And it was a creepy little thing.I passed it back to Silver. “What do you make of that?”She took it, held it carefully and examined it, then said, “Great Goddess.” A few more turns and long looks and she punctuated it with “Holy hell!”

It was a syringelike dart, with a reservoir in the body. Said reservoir had been breached on contact. Then it had dumped a large volume of ultracompressed fluid—my guess was about a liter—out the syringe and into the target, in this case, the target’s abdomen.It had been a hypergolic fluid or fluids.“What was it? Any idea?” I asked.He said, “Residue indicates chlorine trifluoride.”

All I said was, “Daaamn.” I handed it back very carefully.There really wasn’t much that profanity could emphasize. The substance in question is more reactive than straight fluorine, self-oxidizing, and the decay products are hydrochloric and hydrofluoric acid.

What followed was a low-order deflagration burn. You might know it as a “fuel/air explosive.” I’m very familiar with them.Only this one had been inside a human body. Inside the lower GI tract. Hence the reeking mist of blood and shit pervading the atmosphere in this locale. A liter of outrageously reactive gas inside his guts had flashed them into burning vapor, blown him into cooked shreds coated in acid, and splattered those shreds on the walls, which were now etching bubbling pink paisley moirés into the surface.

It was beyond excessive or obscene. It was awe-inspiring.The body stopped just below the shoulders, with the arms hanging from muscle around shattered joints. One leg wasn’t far away, the other lay below a trail of blood down the wall it had hit in flight. The entire torso had been gooified.

Among the smells, though, were things I knew, even through the mask. “I can smell the chlorine,” I said. “The acid level seems rather high. The victim eats a lot of seafood and bitter vegetables.”

Now THAT is an assasination. . .

Long ago in chemistry lab the teacher warned us about doing a certain step wrong as we were working with fairly dilute cyanide. Apparently some years back a fool had managed to do it wrong and then somehow show the professor that the pH was right when it actually was wrong. Cyanide gas was produced. He survived. I’m sure he could tell you the smell.

It was very satisfying when Drogo killed Vyseris with the Golden Crown. Too bad about Drogo. I miss the big goof. He had a real flare for random carnage.

Probably not a good idea dramatically - the more perverse of us would be recalling Monty Python’s The Meaning of Life.

Well there was one certain major hit TV that went down the slow acting poison path. In a few days they might feel like they’re getting a cold, etc.

Five GOT plot lines from history: 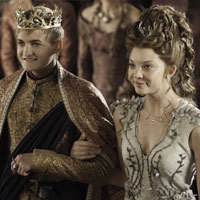 5 'Game of Thrones' Plotlines Ripped Right Out of History

SPOILER ALERT (for those of you who haven't watched history yet).

You don’t go blue if to are poisoned by cyanide. You go red. The way it kills you is by stopping the system which uses the oxygen in oxyhaemoglobin, so you blood remains fully oxygenated and bright red.

Low levels of cyanide are found in lots of different foodstuffs. Cyanide is common enough that the body has ways of processing sub-lethal doses. So, I believe (although I’m not volunteering to test this theory personally) that if someone took 0.2 grams of cyanide and ingested the dose gradually over the course of a week, nothing particularly untoward would happen.

One study on mice found:

“No encephalopathy or overt signs of neurotoxicity were observed following repeated exposure via drinking water to doses as high as 12.5 mg CN-/kg/day in rats or 28.8 mg CN-/kg/day in mice.”

TL;DR It’s got a strong smell of almonds.

he was clearly very poorly parented and if he were any more inbred he’d be a sandwich.

Wouldn’t work as well. The whole point is that Cersei goes from believing that she has won to being utterly defeated in an instant. And she is the only person in Westeros that is the slightest bit sorry for Joffrey’s demise.

The murder of one’s hose is obviously a breach of guest-right. But the Lanisters have forgone the protection of guest-right due to their part in the Red Wedding. So now they are fair game for anyone and any tactics and so are the Boulton’s and the Frey’s.

Another point to consider is that the imperial bloodline has become rather thin. After Tommen there is only Stannis left in the Baratheon line. Dannyrys is looking like she might be the only one left. Jamie isn’t going to be fathering any legit offspring so Tyrion is the last male Lannister to continue the line.

And she is the only person in Westeros that is the slightest bit sorry for Joffrey’s demise.

After Tommen there is only Stannis left in the Baratheon line.

Don’t forget Joffrey and Tommen’s sister Myrcella. Though she’s someone a conqueror would marry to legitimize his claim since she has neither dragons nor an army of former slaves.