Man puts mercury in his mouth

Ummm, this is a really, really bad idea. Just fyi. 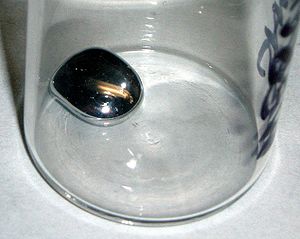 Mercury poisoning is a type of metal poisoning due to exposure to mercury. Symptoms depend upon the type, dose, method, and duration of exposure. They may include muscle weakness, poor coordination, numbness in the hands and feet, skin rashes, anxiety, memory problems, trouble speaking, trouble hearing, or trouble seeing. High-level exposure to methylmercury is known as Minamata disease. Methylmercury exposure in children may result in acrodynia (pink disease) in which the skin bec Forms of mer...

Someone really wants that Darwin Award.

That guy’s as mad as a hatter.

I watched this video last week and the BB post is so vague to the point of doing Cody a disservice. He explains it plainly in the video, it’s not recommended but the type he’s using is medical grade purified mercury (ie: what people have in their fillings). Cody is a really great science educator, In fact he did a follow up video of another metal that is really toxic to ingest… which is gold. Like Mercury for these metals to be actually dangerous they have to be in specific forms that your body will readily absorb, but good judgement should always be performed and one should avoid ingesting them.

He’s actually right that elemental mercury isn’t that dangerous because the body can’t absorb it very well. The real danger from mercury comes from mercury compounds. That being said puttimg mercury in your mouth isn’t exactly wise.

You might want to read that article you’ve posted.

" Quicksilver (liquid metallic mercury) is poorly absorbed by ingestion and skin contact."
It goes on to mention that deliberate intravenous injection doesn’t result in mercury poisoning (though it can have other issues).

according to the wikipedia article you post here, the real problem mercury is organic mercury compounds, not the pure form. According to the article pure mercury is not taken up by the body and is only really harmful when taken in as vapor. The video seems to be a proof of this idea, however shocking and probably stupid it may be.

I honestly thought pure liquid mercury was incredibly toxic so i learned something new. The video was successful in its mission i guess

I’m curious about how it tasted.

Relative to methylmercury, that is absolutely true. Minamata disease is the textbook example. But elemental mercury, while less toxic, is not something to screw around with. I cannot imagine any way this guy did not wind up inhaling significant concentrations of mercury vapor, which is the worst form of exposure to elemental Hg, and intentionally exposing yourself to toxins of tjis sort is just not so bright. His healthcare provider would not approve!

Perhaps that’s why he did that experiment outside on a windy day.

I once had an old-school thermometer break open in my mouth. I don’t remember it tasting like anything, but of course I was scrambling to spit the mercury and shards of glass out of my mouth as quickly as possible. I did look in the bathroom mirror and though how weird it looked in my mouth, but no recollection on taste.

How very interesting! So maybe those quicksilver fountains that the Arab rulers liked to put in their Iberian palaces were not quite as absurdly dangerous as I’d assumed.

Oh well, this is ok too.

“Mercury, the sweetest of the transition metals.”

When I was a kid, my dad had a vial of mercury that I loved to play with. I’d pour it in my hand and then pour it from that hand into the other. Some would eventually spill into the carpet, and I’d try to get all the little driplets to move together and merge into a big enough blob to pick up and reunite with the whole. I was largely unsupervised as a child, obviously

I never put mercury in my mouth but I knew a boy who (was probably lying, but anyway) said he did swallow some and it went right through him…