What happens when you spill mercury all over your school bus

Seems a bit overkill, no?

Chelation therapy is a tad more than a thorough scrubbing.

The son of a friend of mine broke open one end of an old mercury thermometer and, being a curious young person, decided to see what would happen if he stuck the closed end in boiling water. The result was a hazmat team being sent to clean up their house, and a regimen of pills for everyone living there. The good thing is, while he agreed to never do anything like that again without permission, he thought the whole experience was really cool.

I hope they make a field trip to the junkyard and let the kids see the bus being crushed. It would be a great lesson that science can be dangerous and toxic chemicals should be treated with respect, but that accidents can also be a fun learning opportunity.

This story is incredible on a number of levels. I mean, what’s got me curious is what the heck was the neighbor doing with a pound of mercury in his shed? There’s a lot of uses for the stuff, but nothing really home-hobbyish that I can think of. Not even back in the 60’s hobbies, when grown men cheerfully splashed around in radioactive mail-order stuff.

Then there’s the school response: quick, responsible and sane. Get everyone tested, get the worst of the folks who were exposed on (what I am assuming is) a treatment program to cleanse the stuff from your system, and wipe the bus from existence. I don’t think it was anything too dramatic; probably a comptroller somewhere talked to a specialty place about the costs of decontamination while his finger ran down a line of asset devaluation on the bus fleet. Some quick math later, and that baby was headed for the crusher.

Of course, the fantasies are just priceless. The kid w/ the mercury is a hero! Due to his irresponsibly cool actions, people got sick and a bus was destroyed. You just made yourself the center of a school myth, dude.

The linked write up did say the age of the bus was part of the reason it was scrapped… if the bus was already scheduled to be replaced this may have just moved things along.

Seems a bit overkill, no?

If anything, crushing the bus isn’t going far enough. As Terminator 2: Judgement Day clearly demonstrated, the only sure way to keep mercury from harming children is to hurl it into a giant vat of molten steel. 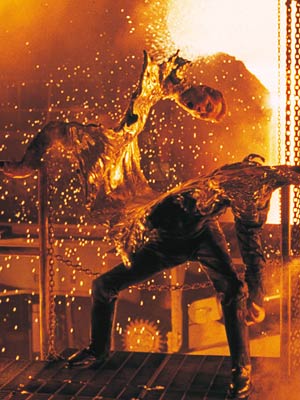 You can buy a used school bus for as little as a few thousand dollars: http://www.usedbusdepot.com/school-buses/ so it doesn’t seem unreasonable that the value of an old school bus would be less than the cost of decontaminating a mercury spill.

I didn’t see that any of the kids had to get chelation. It sounded like they were just washed and changed out of the clothes they were wearing.

Since mercury’s fairly heavy I don’t think a pound is a huge amount. My grandfather had a bottle of at least eight ounces of the stuff in his basement that he gave me when I started playing with chemistry sets.

I asked him once where he got it, and he replied vaguely about having broken a lot of thermometers. Considering the amount I suspect only the first one was an accident. I think he just thought of it as an interesting thing to have around.

Not to mention many school buses are largely made of aluminum, which readily amalgams with mercury. Go look at some aluminum/mercury reaction videos if you want to see why this is a bad idea.

Dang, you beat me to it. The body of the bus could have been pretty heavily compromised if it was made from aluminum. I doubt the frame is aluminum, but the body could have been turned into cheese.

This is also why you can’t bring mercury onto airplanes. A spill would be disastrous.

Then there’s the school response: quick, responsible and sane.

Whereas if he would have brought a plastic pistol the size of a quarter, the response would have been a call to the police, suspension, and a court date.

I’m in possession of a toy I was given in the 80’s which is a gravity maze, but instead of a steel ball bearing it contains a dime-size blob of mercury. It’s a kids toy. Quite a challenge to keep the blob in one piece and get it to the final destination.

Yet it’s still a far cry from the asbestos Fluffy-Bears my uncle Bob played with back in the 50s.

It’s possible that the original owner of the mercury was a carpenter- plumb bobs often have a little chamber that is designed to be filled with mercury, to damp them out.

See, I came into this thread to suggest that there’s probably very LITTLE aluminum in school buses, especially older ones, so it’s interesting to see the opposite assumption.

If they’ve only got the budget to scrub one thing and crush the other, they probably made the best choice.

Unless my google-fu has failed me, mercury thermometers generally contain less than 0.1 ounces of mercury. So your grandfather would’ve needed to harvest 80+ thermometers, and the kids would’ve needed 160+. Possible, but it seems unlikely, especially in the latter case.