This would set a very bad precedent. A big company can apply artwork to their building, purchase the copyright or have the artwork produced by an employee and then using copyright law to censor pictures of their office and the public street it is on.

The artist is a private individual trying to claim ownership of a public space.

It’d be nice if the same principle were also applied to music that incidentally happened to be in the background of a video, rather than being the soundtrack to that video.

The problem arises from who gets to decide if it was incidental. There’s no way Mercedes didn’t scout that location and chose it for the photo in part because of the graffiti.

I know some architects who think they (or their more successful peers) should be able to get royalties whenever car companies use the buildings they designed as backdrops for promotional photographs. Though I’ve plenty of sympathy with the desire, the world simply can’t work that way.

I expect a your next novel to include undocumentable private police wearing copyrighted AI adversarial art on their uniforms.

As a German company, Mercedes is probably more in favour of the German Panoramafreiheit, which specifically includes art on buildings, whereas it seems, the corresponding US law excludes this case. Oh, btw … IANAL!
My personal opinion: If the artists didn’t want to see their work published, they shouldn’t have attached it to the front of a building.

Would kinda put a damper on Rick Mercer’s rants.

Good. I think the extent of some of the copyright law is ridiculous. Like when they start to blur artwork on the walls in reality TV and the like.

Well, judges will decide I suppose. But I don’t see a big deal even if they did scout it, intent is not as interesting as how and whether the art is used.

I sympathise if these artists mostly object to co-option of their public art for a luxury brand more than anything else. I wouldn’t want that kind of association, particularly if I felt my work was political or even overtly anti-corporate and anti-property, as graffitti often is (ironically, in this case) It’s aomewhat akin to artists not wanting their songs played at Republican campaign rallies. CC licenses seem to operate on this principle when they bar the use of open source material for commercial purposes

However, as a matter of protecting value, public works are most often commissioned and paid for then become public. To impose a licensing or control structure is a tough sell.

The law makes a distinction between news and commercial, allowing much more fair use in news than commercial media. This is good. But there is a wide grey area between, on which lives boingboing, fine art, outsider art, family photos, etc.

My inclination is that there shouldn’t be hard and fast rulings where the fair use is always decided on a single principle (eg “if it is publicly viewable then it is always allowed as fair use”) but rather some weighting of factors. David vs Goliath is a fair thing to consider, as is distribution, revenue, audience, percentage used, identifiability, even intent (adversarial vs gift), and on and on.

I presume the courts know this, and won’t be tricked into an overly broad ruling based on what most agree to be a single hard case.

As for this particular case, I lean towards remix rights and fair use. But if say the street was closed to the public for the shoot, or if the artwork were photoshopped into another street, and factors, I might be swayed.

If I were to purchase a Mercedes-Benz (never will), it wouldn’t be because of the mural it was driving past. It’s background, not focus. It may be pretty, but the car is the point.

If I were an artist painting murals in the public space, I’m already being paid (presumably, unless I’ve been suckered into working “for exposure”) to paint that mural.

Since the space is public, and cameras are a thing, I shouldn’t be allowed to claim that only eyeballs are allowed to see my mural (sculpture, building, etc.), and anything else owes me cash money.

If I want to have that much control over my public artwork, I need to put it in a private space where controls can be put into place to limit how it is viewed, and money can be collected from the viewer. Or stick it in a book, and sell the book.

I really hope the artist loses this one. But the way the world is constantly tilting toward the absurd, I wouldn’t bet on it.

I don’t think people should be able to lay claim to areas of public space by putting up some artwork and declaring it off-limits for public use.

On the other hand, Mercedes clearly chose that spot in front of the artwork for commercial usage.

They say “hard cases make bad laws” and this is one of those cases. My natural inclination is to side with the Davids (the mural artists), not the Goliath (Mercedes), but if Mercedes is found to be infringing, that sets a precedent that can be wielded against everyone, not just giant corporations (who will always be able to afford lawyers to argue their case).

This doesn’t seem like a hard case at all. The answer to my mind is that incidental use must be fair use otherwise pretty much every photo taken anywhere but a wildlife preserve is in violation of somebody’s copyright or trademark - it’s just a subset of right of panorama, which we don’t explicitly have in so many words, but mostly do in the US. Think about all the copyrighted, trademarked and design patented items that appear in every photo you take, even down to tattoos. In a world where almost everything you make is automatically copyrighted, almost every photo you take includes items copyrighted by somebody else.

The copyright maximalism proposed by the mural artists would make most photos into infringement - the artists don’t seem to realize that their own freedom to create is based on the flexibility of fair use. 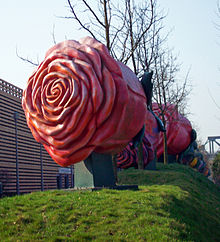 Freedom of panorama (FOP) is a provision in the copyright laws of various jurisdictions that permits taking photographs and video footage and creating other images (such as paintings) of buildings and sometimes sculptures and other art works which are permanently located in a public place, without infringing on any copyright that may otherwise subsist in such works, and the publishing of such images. Panorama freedom statutes or case law limit the right of the copyright owner to take actio Many ...

The additional claim under the “Architectural Works Copyright Protection Act” is interesting, but I think it will be unavailing.

The law makes a distinction between news and commercial, allowing much more fair use in news than commercial media. This is good. But there is a wide grey area between, on which lives boingboing, fine art, outsider art, family photos, etc.

There is. In some cases I’ve heard “Boing Boing is a blog, not journalism!” used as an excuse for Boing Boing’s lack of corrections to some posts. That has a converse effect when it comes to special protections and exemptions reserved for news organizations. I think BB should qualify as news, as this article, for example, is news to me (and that they should take that role seriously even if it isn’t their primary role).

However, even news organizations can be found liable for copyright infringement for even short video clips they record and broadcast, as in the case of a 15 second clip of a human cannonball act recorded by a Scripps-Howard Broadcasting freelancer that was later aired on broadcast news. The finding of infringement was affirmed by SCOTUS.

Fair use is not a reliable panacea, not even for news organizations.

… so, not really a copyright issue, but a ‘corporations-are-people’ issue?

Hmm, no. I can see situations where it’s just one grumpy person.

Suppose that there’s a particular line-of-sight to some famous building / monument / something nice, and many people take shots from that place or even make commercials.

At the end of street is a house, which is always in shot with the building / monument / something nice looming in the background. The grumpy person who lives there puts up a crappy piece of artwork on the front of his house, and then claims copyright violation against anyone who takes that classic shot, now with his artwork, fires DMCA take-down notices everywhere, lawyer letters demanding payment.

That person has just claimed a chunk of the public commons.

With corporations, imagine a company putting up a big f-ing billboard, and then expecting payments for use of “their” chunk of the skyline.

With corporations, imagine a company putting up a big f-ing billboard, and then expecting payments for use of “their” chunk of the skyline.

In France, commercial photography of the Eiffel Tower is prohibited at night because the lighting is copyrighted. The lighting! :-/

In the US, some films edited the TransAmerica Pyramid out of the San Francisco skyline because it is trademarked by TransAmerica and their Errors and Omissions insurance required them to play it safe.

And, of course, there are the various artists claiming that people can’t take photos of public art installations paid for in full by government, eg. Chigago’s “Cloud Gate” bean-shaped sculputre.

So, yeah, that kind of shit is totally plausible and possible under copyright laws in the US and around the world.

As for this particular case, I lean towards remix rights and fair use. But if say the street was closed to the public for the shoot, or if the artwork were photoshopped into another street, and factors, I might be swayed.

i’d probably lean the other way because the art is so prominent, but yeah: i don’t see why the law has to treat all photography as equal.

maybe it’s an intent issue, which granted can be notoriously difficult to prove, but if you’ve deliberately set out to use a specific piece of art for a commercial work - compensate the artist. ( do it even if you don’t have to in my opinion. )

a continuing issue is the length of copyrights. if they were decently short - it’d be less of a problem.

it also feels like there’s some issue around “generic-izaton”. in trademark, if something gets used as the common place term, it can lose it’s trademark. something like that should probably be acknowledged with public art and architecture. ( ie. paris and the eiffel tower. )