I see a disconnect here - the people who created that “Concept” art likely saw that as fair use. It was just a quick mock up. That wasn’t a finished product to them. The Netflix lawyer is right, insofar as the actual screen footage in the show did not use the actual photo.

My bet is they already had the reply saved and waiting in case he ever found out and spoke up about it. That seems too cookie-cutter pre-made of a response.

Yeah, from a four factors standpoint, they’re not using the whole image, they modified it, they didn’t use it in the final product, they didn’t sell the concept art (I’m assuming). There’s no affect on the market for the original work except to maybe draw attention to it. And maybe that’s all the complaint is really trying to achieve because maybe he knows that he doesn’t have a good case for a million dollar settlement…?

Heavey admits that his case is somewhat different, as his photo was used privately as concept art and not in the actual show or in commercial products as Lui’s was.

so… I was thinking maybe the concept art was printed in a book collecting “behind the scenes” stuff, and his problem was with the book. But apparently not. The concept art was shown on the “Beyond Stranger Things” behind-the-scenes special (episode 3).

So his complaint is that he inspired them? I guess? If the actual aired scene isn’t his still image (and it isn’t, he admits that) I don’t see how that’s a case. But IANAL.

The concept art was shown on the “Beyond Stranger Things” behind-the-scenes special (episode 3).

Is that special only available with a paid Netflix subscription? What’s the difference between an episode and a documentary about the episode? They are both products being sold at subscription.

What if the behind the scenes special played an inspirational clip from The Clash, isn’t that another royalty?

My thoughts exactly. See if he goes away after the first missive.

No I think he’s actually saying they used his art in creating the concept and footage. It’s common to use existing photos and modify them through compositing into backgrounds, etc. It appears that’s what they did, anyway.

Either way, the team the did the actual compositing for the footage likely thought the concept art was original so they could run with it. (It’s usually–but not always–two separate teams that do that kind of work).

This suit seems like bullshit. The picture was used in concept art to help the vfx team, which is pretty common practice in the industry. It was never used in the actual show or sold as part of an art book. What damage is done to the artist? Are people going to screengrab a heavily altered photograph instead of purchasing the original piece?

Yep. In advertising/media/publishing, I have thumbnailed so many pieces (as a director) using existing things collaged into items for the artists to take inspiration from.

Yes, exactly. Artists constantly use real world references to get details right. Using a reference for a mockup isn’t something you would pay someone for.

Yeah, I’m not seeing it being used as concept art as an issue. As he says, it’s not his picture in the show. As they say, you can’t trademark natural phenomena. I guess maybe he could sue for unauthorized reproduction of his art when they aired their concept art that copied his image? I’m not sure. It seems rather shaky to me.

Of course, it’s a small, individual creator against a large company, so I believe U.S. copyright law is that the former loses by default in such cases anyway?

I wonder if the issue comes up solely because they used the concept art it in the recap show.

Exactly. And since behind the scene documentaries are getting more and more popular this suit would put an unmanageable burden on art directors to properly attribute and compensate every single image used for reference and inspiration.

In a literal sense it does because he never would have known they used it, otherwise.
I hope this lawsuit goes nowhere, because it would be a bit of a disaster otherwise. Either concept art would all have to be cleared/original work (which isn’t feasible, creatively), or they could never show it anywhere for fear that some part of it isn’t.

I doubt they had it pre-prepared. Lawyers are just good at spinning out those vague-denial letters quickly. I’m not sure I agree with the lawyers here though. Yes, you can’t copyright natural phenomena, but you absolutely can have copyright over a picture of natural phenomena. There’s probably a fair use argument (there’s always a fair use argument), but my bet is they pay him some amount of money to settle this quickly rather than argue it.

Given the extremely limited exposure I wonder what the advertising value to his “brand” is here? Seems like a wash to me.

Is this what appeared in the “making of” video:? 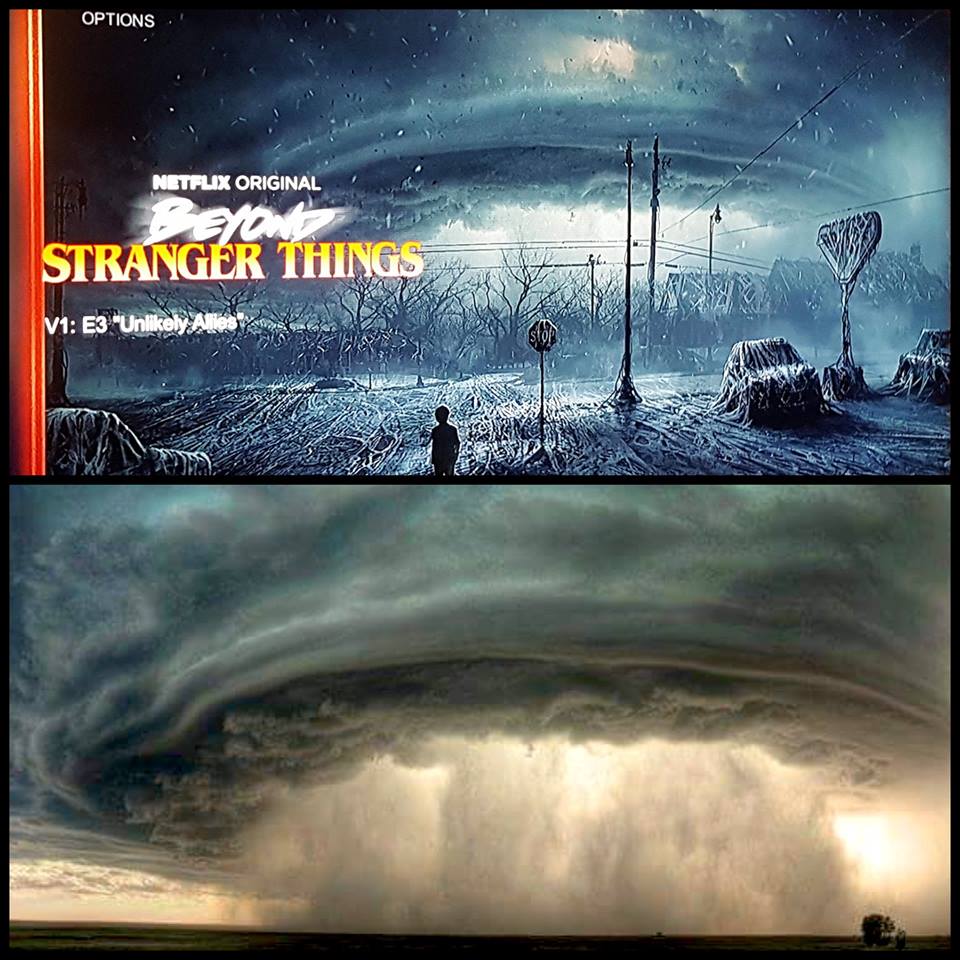 I wonder what would happen if it were the reverse – Netflix concept art being used by someone else?

To me, the clouds in the comparison look similar, but not the same. Clouds like that aren’t rare - at least not in the middle of the country. If I had more ambition, I could root around in my shoebox of rain-wrapped ‘almost tornado’ physical photos and find something that looks pretty similar.