Cracked's fake NFTs stolen, for sale as real ones

I have no idea after watching that what the difference is between a “real” NFT and a “fake” NFT when they’re both just urls and nothing more. They don’t even need to point to anything.

That NFTs are still being purchased at this point just tells me how desperate corporations are for these scammy things to succeed. I’d say I’d never buy an NFT myself but I can easily see some situation in the future where I’ll have no choice but to do so.

This is how the Internet ends, not with a bang but a gotcha.

Then please easily explain. I don’t see why anyone would be required to purchase anything against their will.

Ugh, if there’s one thing that the NFT bois love, it’s irony.

I ripped a GIF of this ages ago… which was originally a video file designed as the payload for an NFT:

From what I’m seeing in tech and financial services industry sectors, this silly art is just the first thing that these stupid and scammy receipts are going to be attached to. Video games are probably where they’ll get me, albeit later than most since I’m usually a couple of years behind. Eventually, though, to have a good gaming experience I’ll have to buy some of this garbage that’s attached to an in-game item.

That’s only one example. Membership subscription on a major Web site? That’s an NFT. Buy a car, you also own its NFT. Buy an appliance, buy an NFT. Take a position at a new employer, an NFT is attached to your CV. It’s meaningless in terms of use and real ownership but that’s beside the point. It’s less about tech or crypto than it is about enabling the neoliberal impulse to Securitise and Financialise All the Things.

I dearly hope that all this Web3 nonsense crashes like the tulip craze. However, judging by the decade+ long persistence of cryptocurrencies and the infrastructure now being built around them, I think that corporate America is hellbent on foisting this junk on all of us. The only people who’ll escape its worst effects will be those who are already flush with (fiat) cash or real estate. 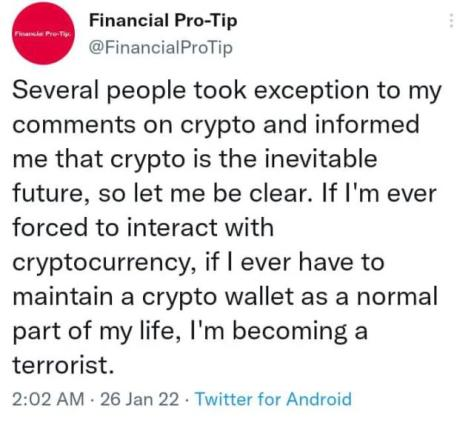 And when it happens, you can bet Activision or Electronic Arts will be there making it an essential part of creating a game account.

Yup, exactly. Tech bros will convince all sorts of customers that an NFT (or just something on the blockchain) proves some stupid shit about something more than a simple ticket does. They will still cost $100 just to mint (cost to be added to your ticket/application/subscription/whatever), and still represent nothing more than a large quantity of CO2 spilled out into our boiling planet.

That NFTs are still being purchased at this point

The one bright spot is that it’s not clear how many NFTs actually are being purchased. It seems like a small number of people are the ones driving everything - other than that, we’ve got a larger number of people who don’t know what NFTs are but are afraid of missing out, so spent a small amount of money to get one or two, and the rest, the overwhelming majority of the market, is people wash-trading the NFTs they minted by “selling” them to themselves for ever greater pretend amounts of money to try to inflate the market.

To me, that dynamic seems to suggest there’s a good chance the whole thing will collapse before widespread adoption of NFTs. 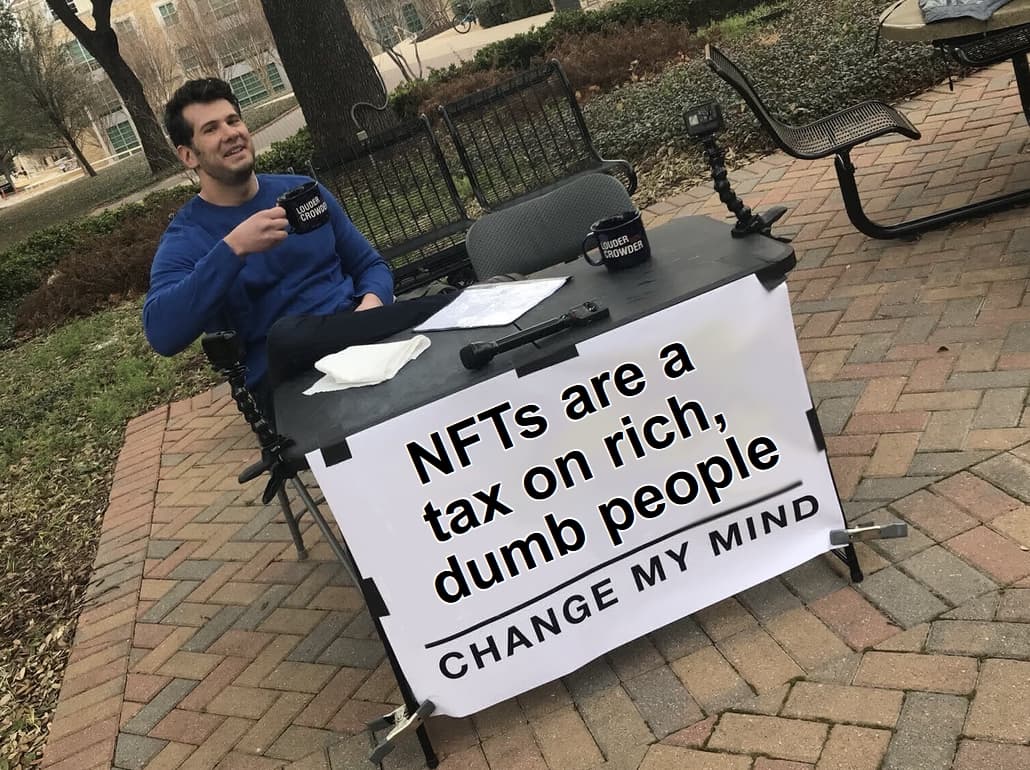 Ha yeah maybe although “tax” implies the government is benefiting from it and maybe that money could go to good use (nevermind the large amount of taxes spent on war and stuff) rather than into the pockets of other grifters.

Don’t worry, the crypto bros are one step ahead of you. 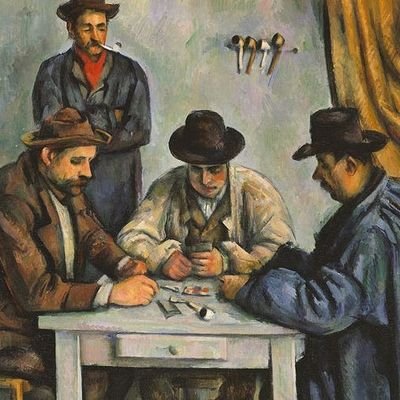 @SilvermanJacob
Wild stuff. You can do all this now without the risk and expense of NFTs. But can you lose access to your house because a hacker exploited a bug in the smart contract and now controls the NFT access key? That's innovation. https://t.co/MOFf7jYawP 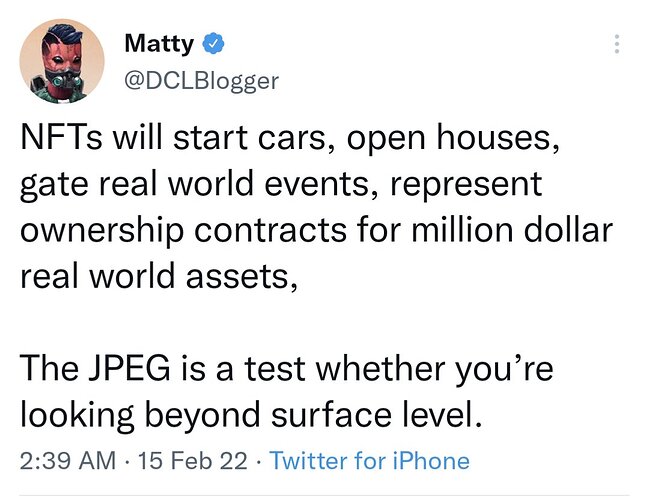 The JPEG is a test of whether American society is foolish enough to entrust the deeds to houses and car pink slips (and the associated payments) to a 23-year-old techbro who thinks “Atlas Shrugged” is the most important book ever written and who follows Zuckerberg’s maxim of “move fast and break things.” No spoilers on how that test will turn out!

Combine smart contracts with IoT devices (as they will) and things will get truly “wild”.

The JPEG is a test whether you’re looking beyond surface level. 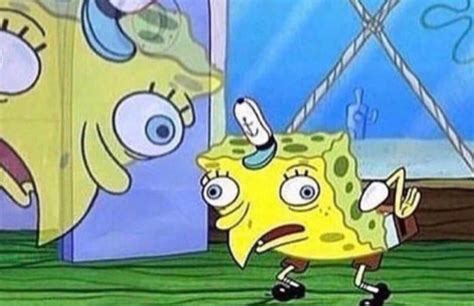 I’ve always thought this world would be a better place if someone could hack ownership to my house.